‘We’re tired of being silent’

Young Black children had to be taught how to interact with officers to avoid becoming victims of police violence, say demonstrators 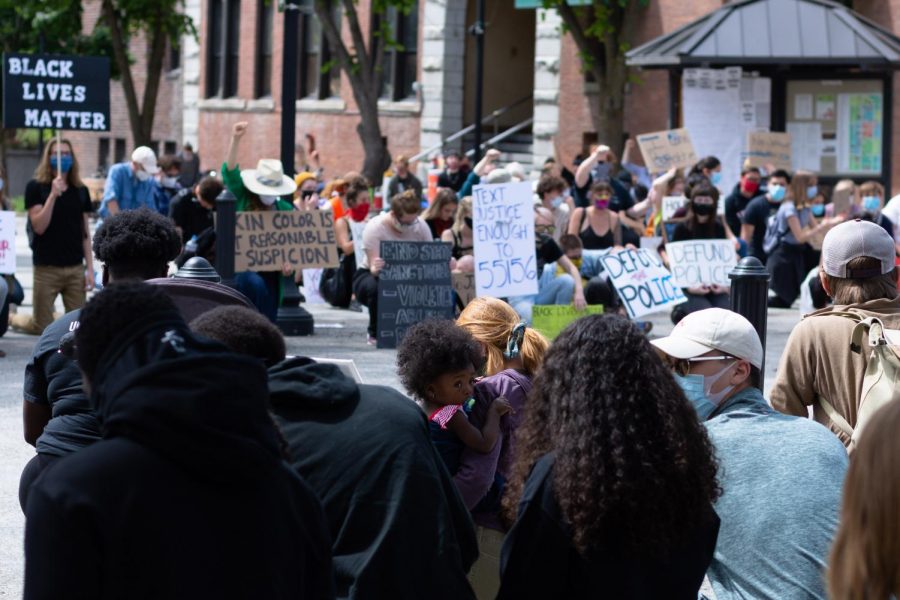 Demonstrators kneel for 8 minutes and 46 seconds, which was how long former Minneapolis officer Derek Chauvin pinned down George Floyd's neck.

Editor’s note: Some sources asked to go under a pseudonym to protect themselves from retaliation.

A crowd repeated the phrase, “I can’t breathe,” after the name of each Black person killed by police was read out into a microphone. The second after each name was read — before the crowd responded — was deafening.

Around 100 people gathered Wednesday at Friendship Square in Moscow, Idaho, for a vigil in remembrance of Black people who died due to police violence.

Payne said Black communities not only lose loved ones because of police brutality, but they also lose the ability to feel safe in their own communities.

“They’re killing innocent people for no reason and we don’t have no one to go to for protection in America,” Payne said. “It’s supposed to be the land of the free.”

Black people were stolen from Africa then enslaved for labor, she said, and other people of color were also forced into labor.

“America is built off of a whole bunch of cultures that they brought here,” she said. “They said we’re supposed to be free and have happiness and now that we’re here, they’re telling us to go back, but if that were the case then America would fall.”

Payne said she believes education can be used to fight systemic racism.

“I’m fighting from the inside by going to school trying to put myself into the corrupt system,” she said. “If it is more diverse, we have a better chance of taking back and having an opportunity of everybody having an equal chance.”

A demonstrator, who asked to be identified as Kayla, said she wants to create a STEM program to help women of color learn and further their education without having to face systematic racism.

“The system is really built upon white supremacy, and it was created so that people of color would not be able to level up in society,” she said.

Payne said education can be difficult for people of color because there are not as many resources available to them. This is why it is common for minorities to grow up in rougher neighborhoods.

“Our parents aren’t able to take out a loan for us to go to school or cosign for an apartment,” she said. “That affects us.”

Payne said this becomes an obstacle in life that people of color can get swallowed in. Education is one of those things that others tend to take away from people of color.

“One thing people fear is an educated Black man,” she said. “It’s very powerful and a lot of people and society have kind of robbed us of that.”

Kayla said appropriating Black culture is also an issue in America. Hairstyles like cornrows were mocked when worn by Black people, but seen as a fashion statement when worn by non-Black people.

Historically-speaking, maps were braided into cornrows or used to hide grains of rice when Black people were escaping slavery, she said.

“They kind of use that excuse when it comes to policing Black people,” she said. “They think we have this superpower strength, but we don’t. We’re all equal.”

Kayla said the police exist because of slavery. The system was created to patrol slaves.

“It’s just a modified version of what was happening. It’s ridiculous,” she said. “There’s been so many killings of black people. The officers have not been held accountable for all these years.”

A demonstrator, who asked to be named as Chris, said George Floyd’s death was the endpoint for a lot of Black people.

“I just try to treat people with the utmost respect in hope that I’m going to receive it back,” he said. “That is not always the case when it comes to interactions with law enforcement.”

As a Black man, Chris said he knows a routine traffic stop can become a matter of life or death.

“We’re given these simple commands and we try to execute them … ‘Don’t make no slight move. Don’t make movements. Don’t do this. Keep your hands on the steering wheel,’” he said. “The way I was taught was just, ‘Don’t do anything to get you shot.’”

Having to think about what not to do to not get killed is a crazy mentality he has to keep, he said.

Kayla said young Black boys have to be taught what they cannot wear, cannot do and how not to draw attention to themselves. This is taught so that police officers do not “have a reason” to pull Black boys over or arrest them for something inane.

“That should not be something we should have to teach our children at all,” she said.

Shevy Byass, president of the Black Student Union at University of Idaho, said she joined the protest because of her child.

“I don’t want to have the race talk with my daughter,” she said.

Byass said she grew up with her mother giving her instructions on what to do when being in contact with police.

“My mom used to tell me, ‘Every time a cop talks to you, get their name and their ID. Text it to me, call me, I don’t care,’” she said. “‘We have that person on record that they came up and talked to you.’”

Kayla said she always checks in with some of her friends to make sure they are safe because they are young Black men, and she does not know whether they will be okay at the end of the day.

“I don’t want to lose someone close to me because of his skin tone,” she said.

Police officers were standing behind Chris during the vigil. He said he was constantly looking over his shoulder.

“It’s scary to me that I’m the one that has to look back and make sure that I’m safe,” he said.

“For many years, people of color weren’t even looked at as people,” she said.

Kayla said discrimination in the U.S. has not changed and history is repeating itself. Her grandma told her the same things that occurred 50 years ago are still happening now. She said she does not want that for her children.

“We’re tired of being silent,” she said. “We’ve been silent ever since we got here in the states.”

Kayla said she has a cousin in elementary school who has been bullied because of his race and skin tone. She said this type of behavior is taught at home from a young age.

“Racism isn’t just pre-programmed into our brains,” she said. “It was taught [to people].”

Kayla said some people who she considered friends have been silent all this time and that speaks volumes. She has spoken to others whose only contribution was posting two emojis on her Snapchats. However, she also had people, who she has not spoken to for a while, reach out to her and ask if she needs help and how they can support her.

If the roles were reversed, Kayla said she would not hesitate to extend support to her friends.

Chris said he saw some social media posts created by white people making jokes about racial injustice, which was not funny in his eyes. Sometimes allies can do something with the intention of helping Black people or people of color, but as a Black person, he sometimes questions their support.

He said he is tired of constantly having to talk to white people and tell them information that they do not seem to retain. There are resources available everywhere online.

Byass said America is currently in one of the biggest civil rights movements in history. She is proud to see people coming out to support this and other demonstrations across the country.

She said it is important to have demonstrations in small towns and for people to join because the message will spread further with more people involved.

“Some people from small towns can relay the message back to their friends and family back home to know that, at the end of the day, we are still human beings,” Byass said. “We have rights just like everybody else. If you cut me, my blood is just as red as everybody else’s.”

Byass said protests have grown in size and noise because it seems like the only way to be heard.