In Your Words: Speechless

Evergreen columnist details her experience at the Pullman protest May 29 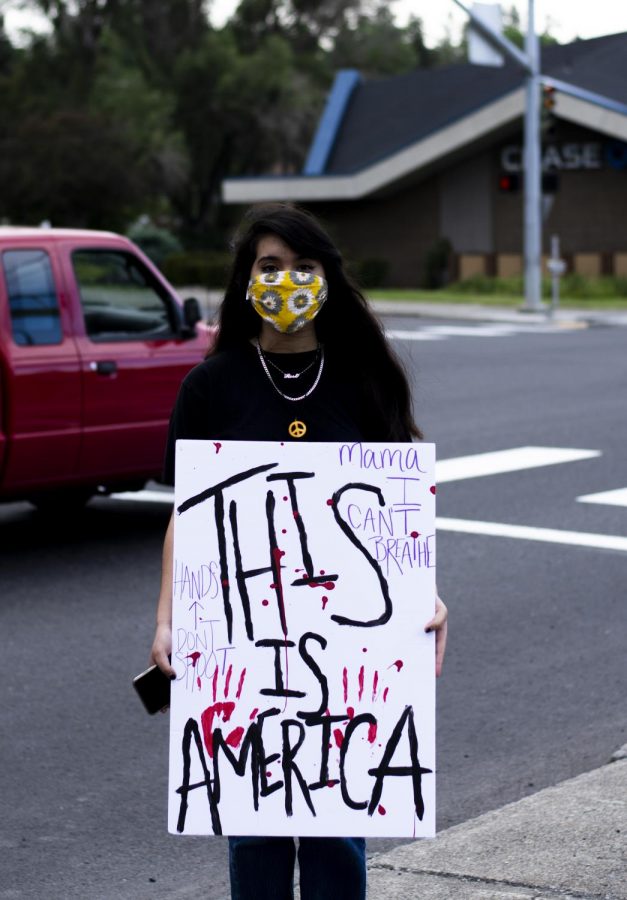 Rose Maria Robles, Pullman resident and high school student, holds a "This Is America" sign May 29 at Cougar Plaza.

*In Your Words is a series highlighting students’ personal stories. You can submit your piece to mint@dailyevergreen.com with the subject line “In Your Words.”

A group of about 30 protesters were holding signs and wearing masks at Cougar Plaza in downtown Pullman. It happened in the afternoon on May 29.

Some signs were brightly colored, while some were written with Sharpie on roughly-cut cardboard. A girl I knew from high school was giving a statement out loud while making sure passing cars could still see her sign .

“Black Lives Matter,” “Enough Is Enough” and “Justice 4 George Floyd” were some of the signs held up to the sky, hoping the message got across to someone, anyone and everyone.

I was immediately struck by the lack of people of color at the protest. I wondered why. That’s probably because the word didn’t get out as much as people hoped. I didn’t hear about it until the day of, and many of those I told were at work.

An older woman asked me if I wanted a sign, and I gratefully accepted, realizing I had only brought my phone and a water bottle.

She gave me a neon pink sign that had names of black men, women and children who were murdered by police officers. On the back of the sign, in bold black lettering, it reads “NEVERTHELESS SHE PERSISTED,” an obvious reference to the Women’s March.

It made me wonder how many other protests she’d been to, and what else she had written on the back of the signs she was giving out. I also thought about the endless amounts of signs stored in my mom‘s closet and how we used and reused them throughout the years. Signs that we used to protest for the rights and lives of people of color.

Cars passed by, honking, shouting, putting their fist up in support. Some were reading signs, some took photos and some flipped us off: namely a man in a green truck to which a woman shouted out to him, “We love you!” Everyone cheered because that’s the message we want to send, right? Love, don’t hate? Or some version of it.

A few moments later, a woman and a man were brainstorming sign ideas. I remember the times I’ve struggled with this, having to write “Black Lives Matter” and “Anti-Racist” because there are people who don’t believe in the concept that racism is, simply put, bad.

I didn’t hear what they settled for because a woman yelled out of her car in confusion saying, “Is this for Trump?” The boy whose sign was in question simply said no. The light turned green and she went on her way.

Does she understand her place in this world? Her privilege to question then move on?

About an hour in, the wind picked up. I was struggling to hold my sign and keep my dress from blowing. It blew dirt and rocks at my legs and eyes, and for a moment, I was grateful that the pandemic had brought masks to the front. I was trying to find ways to cover the parts of my eyes that my glasses don’t when a Black woman yelled from the driver’s seat, “Thank you! Thank you! Thank you!”

To me, her relieved thank you’s were enforcement that I was heading in the right direction, though I wish I could have spoken to her more to hear her story.

The wind brought storm clouds, cheering, honking and later lightning. By this point, people were beginning to leave, but I wasn’t ready to go yet. A friend of mine saw us on her way home and she brought her roommates and cardboard signs to protest with us. We stayed through the dust, the hail, the rain, the thunder and the lightning, until our clothes stuck to our bodies and the five of us were the only ones left. As the lightning came closer, I thought of those we were here to represent.

 We’re here protesting the murders of black people across the U.S.

We’re here protesting the murders of black people across the world.

We’re here protesting racism and telling the officers and ordinary people, “We won’t stand for this.”