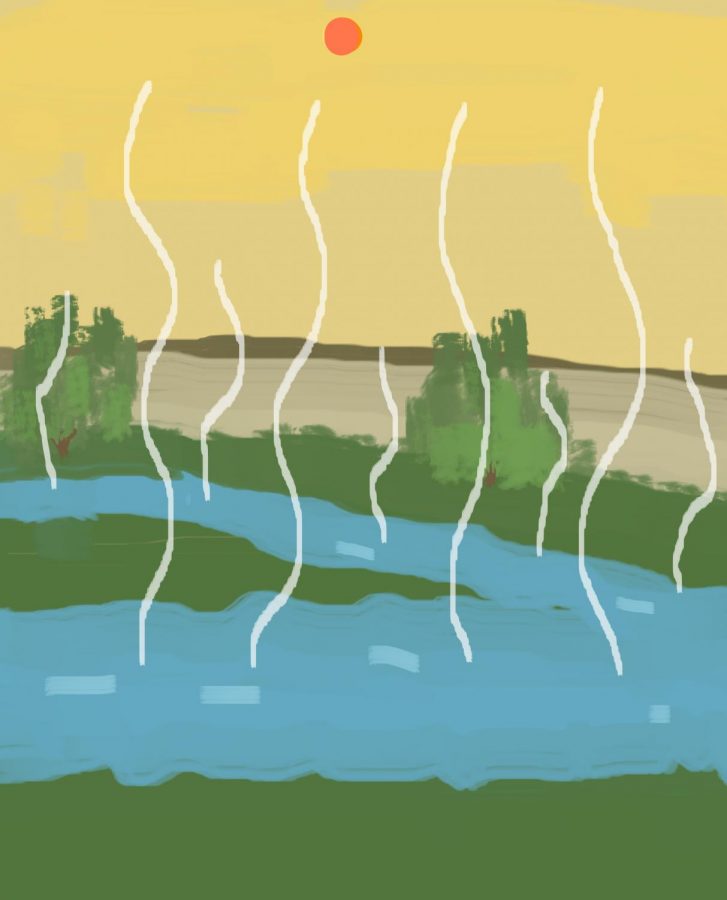 Salmon and most other fish do not internally regulate their temperatures. Instead, they adapt to water temperatures, so if the water is too hot or cold, the fish will not survive.

The Environmental Protection Agency released a report May 18 for public comment stating the temperatures of the Columbia and Lower Snake rivers do not meet Washington’s and Oregon’s water quality standards, which can be harmful to salmon.

The report creates a temperature standard for the Lower Columbia and Lower Snake rivers in Washington and Oregon. The report states it is challenging to establish standards because of the many factors that influence the rivers’ water temperatures, said Sarah Highfield, communications director for the Port of Whitman County.

The states’ water quality standards for some areas of these rivers are not being met, according to the EPA report, because the temperature is too hot.

The report established maximum temperatures for the rivers. These temperatures can only be exceeded a certain number of times over a certain time period, said Jenifer McIntyre, assistant professor for WSU’s School of the Environment. This has been created so the rivers can be in compliance with the states’ water quality standards and aquatic animals can be kept safe.

“The trouble with these warmer temperatures tends to be this vulnerability to disease, especially for the returning adults [salmon] because they’re already stressed out trying to swim upstream,” McIntyre said.

Salmon and most other fish do not internally regulate their temperatures, so their body temperatures are the temperature of the water they are swimming in, she said.

When salmon are in their optimal temperature range, they can grow and reproduce properly, McIntyre said, but outside of that range becomes more difficult. If the water temperature is too hot or too cold, it can be lethal to salmon. However, higher temperatures are especially bad for them.

The salmon, through their migration from freshwater to the Pacific Ocean and back, are important to many ecosystems. Many different animal species feed on salmon carcasses, and the nutrients in the salmon carcasses left in forests then decompose, she said.

Climate change, deforestation, dams and the removal of vegetation along rivers contribute to the rising temperatures of the rivers, she said.

Dams create something akin to a pool of water instead of running water. The water is still running, but it is much slower than it would be without a dam, McIntyre said. These reservoirs warm up more easily, so the water at the top gets warmer.

Additionally, warm water pours over the barrier of the dam, she said. Dams push the warmest water downstream over the top of the dam.

McIntyre said it is difficult to say whether removing one dam from the Columbia or Lower Snake rivers would make the water temperature cooler. Taking out one dam would probably make a difference, she said, but she does not know how much of a difference it would make.

What the government will do about the warm water is the main issue, said Julian Matthews, board member and coordinator of Nimiipuu Protecting the Environment, a group that educates Nez Perce tribal members on environmental issues.

Matthews said he is worried salmon will go extinct if nothing is done.

“What I’m hoping is that they determine the breaching of those four Lower Snake River dams will help cool the water,” he said.

The EPA report tries to quantify what the river temperatures might be with and without the dams. However, it is hard to figure out what the temperature of the rivers would be without them, Highfield said.

“They do concede that it might be difficult to meet the water quality standards even without the dams,” she said.

The Columbia and Lower Snake river water in Washington and Oregon are already too hot when it enters from Idaho and Canada, Highfield said.

The Port of Whitman County is a member of Northwest RiverPartners, she said.

“[The Port of Whitman County] agree[s] with the Northwest RiverPartners’ initial statement,” Highfield said. “Which is that the water quality standards for Washington and Oregon are unachievable regardless of the dams being in place on the Lower Columbia and the Lower Snake.”

The dams provide benefits to people, including hydropower to the Pacific Northwest and barge transportation, which allows farmers in Whitman County to compete for the international market, Highfield said.

The public comment period ends July 21. More information about how to submit a comment can be found here.