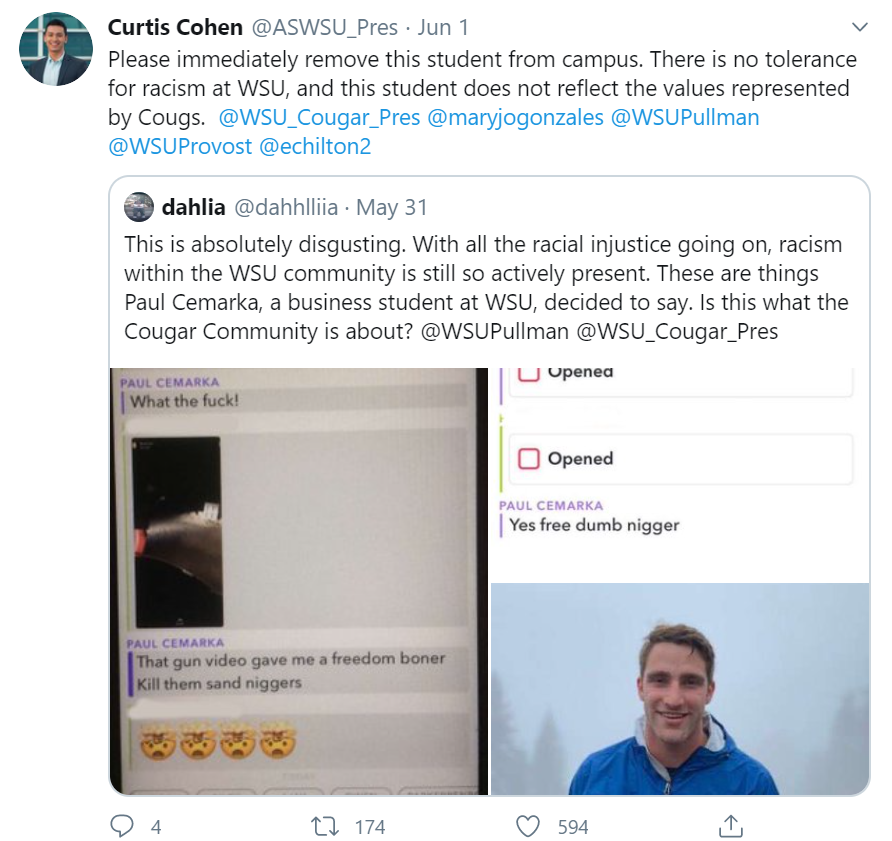 “If they are not doing that, then we're going to have to go ahead and hold up a petition and be an advocate to make sure that the student is no longer on campus,” ASWSU President Curtis Cohen said.

Editor’s Note: The Daily Evergreen recognizes that the social media post depict screenshots with graphic language. It was added to provide validity and context to the story. Please view at your own risk.

Editor’s Note: This article has been updated to include an Oct. 30 interview with Paul Cemarka.

WSU students called for action from university administration after screenshots of a student’s racist comments surfaced on Twitter on May 31.

The Evergreen reached out to Paul Cemarka, the student who made the racist comments, but he did not respond.

Xie said she knows many people who are acquainted with Cemarka. One of her friends, who is not a WSU student, sent her the screenshots. The friend was not the person who screenshotted it, she said.

“Having him on campus — we felt like something is kind of threatening the safety of Pullman and Black people in the community,” Xie said. “We wanted WSU to take action on that.”

Saying racist comments, even in private conversations, is not alright, Xie said.

“I just really think it’s toxic to be neutral about racism, and people need to understand that and know there are consequences for their actions,” she said.

Looking at WSU’s history, Xie said she was disappointed in how poorly the WSU administration has responded to race-related harassment in the past. She said the administration has not made “any concrete action” to prevent similar events.

“WSU speaks on having a diverse community all the time,” Xie said. “They need to start not just verbally saying that they don’t condone these actions, but actually work toward preventing it in the future.”

“There is no tolerance for racism at WSU,” Cohen tweeted, “and this student does not reflect the values represented by Cougs.”

Cohen said it is important for ASWSU to “advocate and educate” students about racism and the Black Lives Matter movement, as well as to support multicultural student organizations like Black Student Union.

BSU wrote in an email that they cannot comment at this time, but stated that they do not condone any form of racist behavior.

As the school year kicks in, Cohen said ASWSU plans to connect with multicultural groups to help develop a plan for educating the student body about issues relating to racism. He said this could be through programming or offering free educational materials, such as books written by Black authors.

Cohen said the administration should be held accountable in making sure they are taking the right action.

“If they are not doing that, then we’re going to have to go ahead and hold up a petition and be an advocate to make sure that the student is no longer on campus,” he said.

ASWSU also issued a statement Wednesday saying they “condemn any and all racist rhetoric used amongst each other at Washington State University.”

“We hear you and we see you. There is no room for racism at WSU and we are looking into the matter,” the tweet said. “Threats of violence against any person are not acceptable.”

Holly Ashkannejhad, director of the Office of Civil Rights Compliance and Investigation, said people can file complaints on their website. Individuals can also call the CRCI office, arrange for an interview or email Ashkannejhad personally.

CRCI is an independent investigative body, Ashkannejhad said. Their role is to review the information they receive, look at the university’s policies and determine if there is sufficient information before issuing a notice of an investigation. This is part of a due process requirement under civil rights laws and regulations, she said.

After reviewing the information, CRCI reports all evidence to the Center for Community Standards, which Ashkannejhad said is the disciplinary arm of the university.

Reports can be done anonymously, she said. In the online complaint form, providing one’s name and WSU ID is optional.

“What’s important for folks to know is that information we receive goes into our investigative file that we would potentially use as part of our investigation,” Ashkannejhad said, “meaning that that evidence might be available to the people who are participating in the investigation to review and inspect.”

CRCI reviews each complaint, she said. The office also does outreach to those who file complaints to ensure they understand the process involved. She said it is also part of CRCI’s policy to ask people what they prefer the outcome to be, which is included in CRCI’s investigative summary.

Phil Weiler, WSU’s Vice President for Marketing and Communications, said he cannot speak about the screenshots because it is currently being reviewed by CRCI.

He said there is a due process that is extended to people who receive complaints, which is why all complaints should be taken to CRCI.

“When they are angry about something, they want an immediate response. In some cases, they say that student needs to be expelled, or that faculty member needs to be fired,” he said. “Unfortunately, that’s not the way our society, our government, works.”

Weiler said the administration’s role is to balance and uphold the right of free speech, even if the speech could potentially be opposed to the university’s teaching mission. He said the university is a “marketplace of ideas,” which means that sometimes people will be exposed to content they disagree with or find offensive and triggering.

Even though it is CRCI’s responsibility to investigate, Weiler said the administration can still contribute by ensuring WSU community members have resources to go to when dealing with speech they might view as offensive.

“Free speech is one of our most cherished liberties. It’s also one of the most aggravating liberties because, by definition, if somebody is exercising free speech, they’re making somebody else uncomfortable,” he said. “If everybody agreed to what was being said, free speech protections wouldn’t be necessary.”

Cohen  said he is encouraging the WSU community to keep posting on social media and learn more about racial injustice in the country.

“Cougs help Cougs goes beyond just normal daily life,” he said, “but goes also into making sure that we’re standing up against racial injustice.”

This is absolutely disgusting. With all the racial injustice going on, racism within the WSU community is still so actively present. These are things Paul Cemarka, a business student at WSU, decided to say. Is this what the Cougar Community is about? @WSUPullman @WSU_Cougar_Pres pic.twitter.com/4A4a7s6kc1

On June 15, Cemarka reached out to the Evergreen and denied posting the comments on Snapchat.

During a Oct. 30 interview, Cemarka said he did make the racist comments and takes full responsibility for his actions.

“I denied, and I also threatened litigation [to the Evergreen],” he said. “It was the way I wanted to do it then, and then I came to the realization that there’s no better strength than the truth.”

Cemarka said the conversation in the screenshots occurred in 2018. He and his friends used the group chat to schedule weekly poker nights and other events.

“We used the term pretty loosely,” Cemarka said. “I had African American friends who let me use it when addressing them, so I saw it as a very casual word.”

He said one of the members in the chat grew apart from the rest of the group. When the Black Lives Matter protests happened in the summer, that member decided to scroll through the chat’s conversations and take screenshots of racist comments, Cemarka said.

The individual shared the screenshots to Xie but did not discuss the racist messages with other people in the chat. Cemarka said he did not know about Xie’s Twitter post until friends called him about it.

After Xie posted the screenshots, Cemarka made apologies via Snapchat and then deleted his social media accounts for a few months. He also left WSU.

Cemarka said he is being vigilant in not using the n-word. He described his actions as irresponsible and disrespectful. He said he is taking this time to educate himself on racism and other issues that affect the Black community.

“I take full responsibility for my actions,” he said. “I hope the WSU community can heal and move on from any actions I made that seemed to misrepresent the university itself and its student base.”