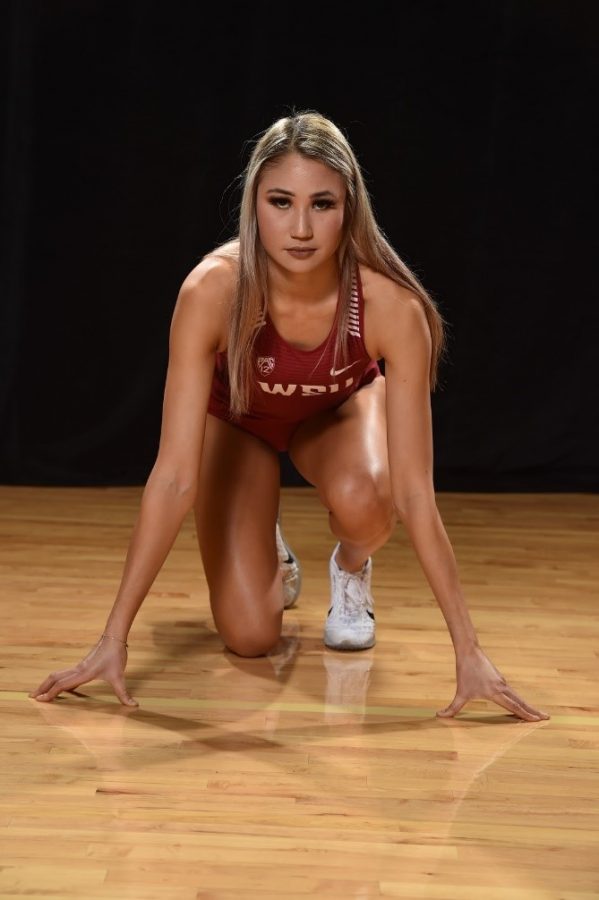 Stephanie Cho recently graduated from WSU and majored in pre-medicine. She also ran the 400-meter race for WSU's Track and Field team.

WSU graduate Stephanie Cho is no stranger to the phrase ‘ready, set, go.’

Compassion, strong work ethic and leading by example are just a few skills Cho has shown through her experiences at WSU, boyfriend Kennan Schrag said. Cho was a student-athlete for the WSU track and field team where she specialized in 400-meter hurdles.

Growing up in Vancouver, British Columbia, Cho was involved in track, soccer and competitive swimming. She said for her, track shifted from an individual sport in high school to a team sport in college.

“I built relationships and memories that I will cherish for the rest of my life,” Cho said. “My physical and mental limits were pushed every day, and I struggled. But I was able to come out much stronger because of it.”

Over the years, Cho developed a well-built relationship with her Coach Wayne Phipps. One of her most memorable moments with Phipps was when he peeked over a hill during a track meet in Texas to cheer her on before one of her races. The unconditional support from her teammates and coaches was not overlooked, Cho said.

“Being surrounded by like-minded, hard-working individuals motivated me to come ready to work hard every day,” she said.

Cho is studying pre-medicine, where she balances both academics and athletics. She said being involved in extracurricular activities on campus and in Pullman was important to her.

Cho worked in the Exercise Physiology & Performance Laboratory. She coordinated a large-lab project. She also was a TA for two upper-level kinesiology classes, as well as a peer-academic counselor for the athletic department and volunteer at the Pullman Regional Hospital.

“I was forced to develop excellent time management skills early on in my college career in order to achieve a balance,” Cho said.

She graduated with a cumulative GPA of 3.94 and received a senior award from the WSU Kinesiology Department, she said.

“I see Stephanie carrying over her experiences, and the work experience she has,” Schrag said.

Cho broke the 50-second time trial record in her fall training. She also said she remembers winning the dual meet hosted by WSU against the University of Washington in 2018, which included both men’s and women’s teams.

“Stephanie is an incredible athlete and an awesome person,” Schrag said.

Now, Cho plans to go to medical school at WSU to get her master’s degree in exercise physiology. She said she has spent a great deal of time studying for the Medical College Admissions Test, which is a full-time job.

“Being on the track team was an unforgettable experience that came with many highs and lows,” Cho said. “I am so grateful that Coach Phipps gave me the opportunity to run for WSU.”