Gatherings of more than 50 people prohibited; changes may be made to academic calendar 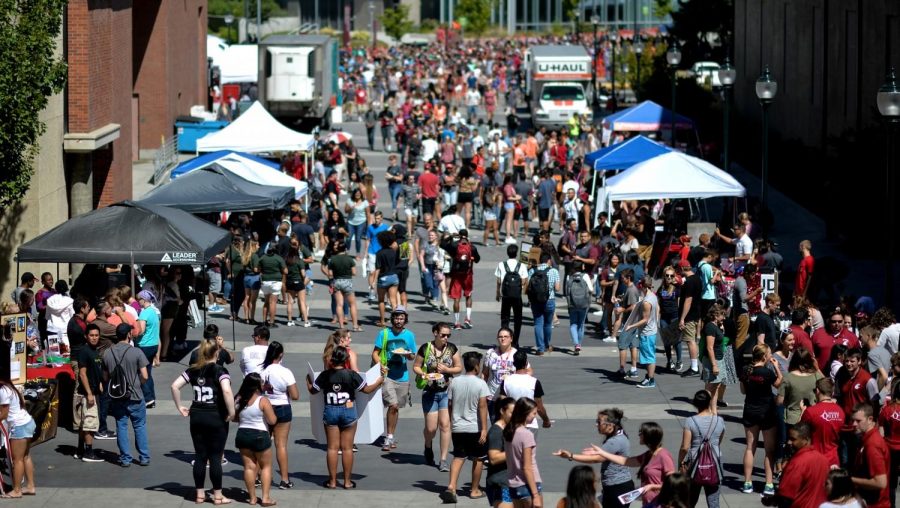 Prohibiting gatherings of more than 50 people, limiting room occupancy, and designating flow for foot-traffic are among safety procedures WSU plans to implement in the fall.

Instructors in fall 2020 will use a HyFlex model, which is a combination of in-person and distance content delivery, according to a COVID-19 update emailed to the WSU community from WSU President Kirk Schulz.

Classes that require seating for more than 50 students will not be offered face-to-face, according to the email. Faculty also have the option to offer multiple sections for a course, in which a class is divided and each portion meets in person on a designated day to limit the number of people present.

WSU officials are considering changes to the academic calendar that would minimize breaks and travel, according to the email.

Phil Weiler, WSU’s Vice President for Marketing and Communications, said students traveling home for breaks and then returning to campus could increase the risk of an outbreak. This is especially true around Thanksgiving break, which is at the start of the cold and flu season.

Changes to the academic calendar might also involve delaying the start of spring semester, Weiler said, which could potentially cause the school year to end later in May.

Federal financial aid depends on the number of weeks of instruction, so changes to the academic calendar must be carefully considered to prevent jeopardizing aid, Weiler said.

All face-to-face classes must have a backup plan for online delivery, according to the email.

Faculty in high-risk groups can teach classes with fewer than 50 students using distance delivery, according to the email.

On-site employees will return to work at different times, depending on the location within Washington and other circumstances, according to the email.

Weiler said there is currently a pilot program for a daily attestation through myWSU that employees must complete before coming to campus. Each day, they must attest that they are not experiencing any symptoms of COVID-19.

“For us to be able to open and be able to keep COVID-19 in check, it is going to require people to work with us,” Weiler said. “Quite frankly, I don’t think it is too much to ask for people to wear a mask, to have an app on their phone, and to attest on a daily basis that they’re not feeling ill.”

The WSU Office of Research created guidelines that will allow some on-site research, scholarship and creative activities to resume this month, according to the email.

Safety protocols will be implemented in accordance with local and state guidance, according to the email. These include prohibiting gatherings of more than 50 people during fall semester, limiting room occupancy, and designating flow for foot-traffic. This also includes utilizing specific cleaning protocols for all in-person activities on any WSU campuses.

WSU employees are in the process of evaluating each classroom to determine how many people can fit while maintaining social distance.

“That is going to be a Herculean task to distribute space by class and figure out who is going to go where at what time,” Weiler said.

The plans will be considered thoroughly so decisions do not have to be changed after they are announced to the WSU community, according to the email.

“Every time you peel back the onion, there is another layer that you have to take a close look at,” Weiler said. “I know people are frustrated, because they’re like, ‘Why can’t you answer these questions?’ And the answer is, because there are multiple layers to any of these decisions.”