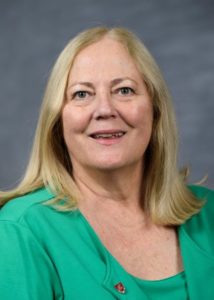 When Theresa Elliot-Cheslek graduated from WSU in 1982 with a bachelor’s degree in sociology, she was adamant that she would never go back to eastern Washington.

“Things change when you get older,” she said.

Elliot-Cheslek, WSU vice president and chief human resource officer, has served in WSU’s Human Resources Department since 1999. She was recently appointed as the western region representative to the national board of the College and University Professional Association for Human Resources, which is an association that works with human resource departments in institutions of higher education.

Her position will take effect July 1.

“It was just seeing the value we could bring into managers and employees,” Elliot-Cheslek said. “That’s where I got that desire.”

Elliot-Cheslek went back to eastern Washington, working in the Spokane Regional Health District’s human resources department. At the same time, she saw a vacancy announcement for WSU.

“The experiences of WSU as a student was just fantastic,” she said. “That’s really what brought me back here … those memories and wanting to be a part of WSU.”

At WSU, she started as a human resource consultant and eventually moved to her current role. She has worked on different projects, including modernizing human resource processes through a new system called Workday. Elliot-Cheslek said the system will be implemented in January 2021.

“The system we use now throughout WSU is about 40 years old,” she said. “This is going to be a major shift for WSU to move into the 21st century.”

Within her roles, she hosted conferences and helped develop a learning framework for human resource professionals. The framework focuses on mastering skills that would make individuals competent in the human resources field, she said. These skills include recruitment, training, strategic development and team-building.

“How I was [an] HR person as a manager when I graduated in 1982 is totally different than how I manage and lead now, because you just learn so much through life,” Elliot-Cheslek said. “What I try to live by is just ‘Learn all the time.’”

In 2019, she received CUPA-HR’s Distinguished Service Award for the western region.

Bonnie Dennler, WSU employment services manager and member-at-large for CUPA-HR’s Washington chapter, said Elliot-Cheslek encouraged her to apply for CUPA-HR’s Emerging Leaders program, which she was selected for in 2019-2020. The program selects individuals who have contributed significantly to their institution’s human resources department.

“[Elliot-Cheslek] was so extremely proud and she was so ecstatic about me being selected,” Dennler said. “I think that that was really a great moment to feel so valuable and recognized for the contributions I have done.”

“With her serving in these different roles, she has really opened up the opportunities that our staff in WSU have to be able to engage [with CUPA-HR] and engage … with this human resource profession in general,” Dennler said.

Andy Brantley, CUPA-HR president and CEO, said Elliot-Cheslek will help oversee the strategy and overall work of the association with her new role. Some of her duties will include serving in CUPA-HR’s diversity, equity and inclusion work.

“[Elliot-Cheslek] is the epitome of leadership,” Brantley said. “She quickly catapulted from being a member of the board to being chair of the region and handled that, not only with incredible leadership, but incredible grace as is so typical for everything that she does.”