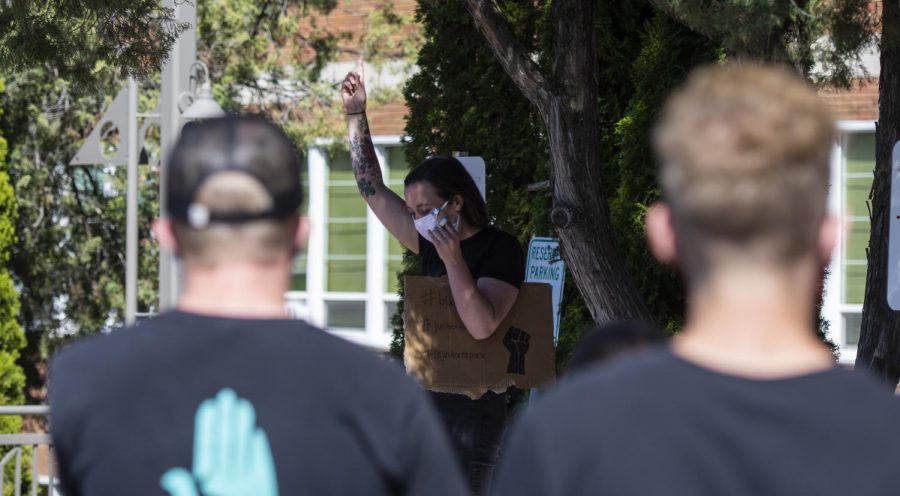 Samantha Fulgham, organizer of the march through Pullman on May 30, said organizing a demonstration is about building a safe, open platform.

Activists and city officials recommend demonstration organizers contact police if they are planning a demonstration.

Pullman Police Chief Gary Jenkins said the department wants to work with organizers to protect their right to protest and de-escalate tense situations should they arise.

“There’s nothing wrong with having a protest or a counter-protest,” he said. “The only problem happens when things get physical.”

People do not need to apply for any special permissions from police, Jenkins said, unless they plan on blocking streets or using amplified sound.

Debbie McNeil, organizer of the demonstration at Cougar Plaza on May 29, wrote in an email that she only spoke with Jenkins before the event and did not need to apply for a permit.

Jenkins said he could not recall a demonstration that turned violent throughout his 10 years in Pullman.

Samantha Fulgham, organizer of the march through Pullman on May 30, said she wanted the Black community in Pullman to see others were on their side, that they were not alone.

“Our town is not unlike any other town in America, with the same racial and bias issues that every town has,” she said.

Some people criticized Fulgham for contacting the police beforehand. She said she thinks reaching out is important, so officers can help keep demonstrations peaceful.

Advertising the march on social media helped get more people to show up, Fulgham said. Despite sharing the event on a few Pullman-focused social media pages, Fulgham said she wished she reached out to groups such as WSU’s Black Student Union.

She said this may have helped avoid mistakes such as the language she used to advertise the event.

“Black and POC,” Fulgham said. “Those are not interchangeable terms, the experiences of those two communities are similar in some ways but very different in others.”

She said organizing a demonstration is about building a safe, open platform, not drawing attention to oneself.

“If you’re trying to organize a protest because you want the limelight, then you’re doing it for the wrong reasons,” she said. “It’s not about you.”

Fulgham said she also recommends organizers make sure no other events are happening at the same time before they advertise their event.

Fulgham said she is planning another march 5 p.m. Friday at the Cougar Pride statue in front of Martin Stadium, which will end at City Hall.

“Know that you’re going to do some things wrong,” she said, “and be willing to accept the constructive criticism and learn and improve.”