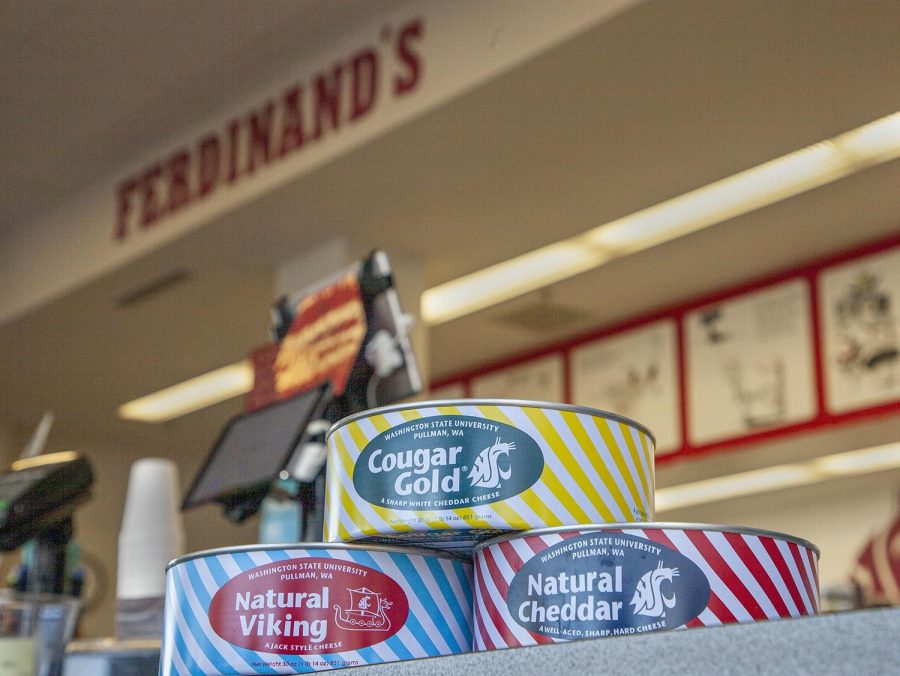 Cougar Gold Cheese is made by student workers at the WSU Creamery. Cheeses of all flavors come in tins.

If you ever wondered why Cougar Gold Cheese comes in a tin can, you first need to take a trip back to 1940.

“Not cause it’s gold, because it’s not, it’s white,” Haugen said.

Golding added a lactic starter culture — bacteria that is added to milk at specific temperatures — to make the unique flavor in Cougar Gold, he said.

“He put in another culture called an adjunct culture that doesn’t really produce acid, but having that extra culture in there produces a different flavor,” Haugen said.

In the 1940s,  plastic was not available as far as packing options, he said. The main packaging the creamery used was wax. Shortly after, tins became an essential method of storage for Cougar Gold.

“We’re probably one of the only people that [use cans for] cheese,” Parker Baker, student worker at WSU Creamery, said. “That itself is kind of unique.”

Haugen said throughout the years, the U.S. government and the American Can Company gave funds to WSU so it could keep the cheese in tins.

“They wanted to be able to get cheese to the troops more easily in World War II,” he said.

“We want people to come to WSU to get Cougar Gold,” he said. “The farther away from WSU it gets, the less connected it is.”

In order to make the cheese nutty and sharp, Haugen said it takes as long as an eight-hour day to produce one batch. In the morning, workers begin by pasteurizing the milk. The milk then goes into the cheese, which is when the culture is added as well.

“Each batch is made a lot more meticulously,” Baker said. “It’s made by students that are there to learn.”

About 90 percent of the employees at Ferdinand’s are student workers who are there to learn about food science and get work experience, Baker said. Cougar Gold is not made the same way as mass producers.

“We actually age it for a year before we even sell it,” Haugen said. “So the longer the cheese is aged, the sharper and stronger it is going to get.”