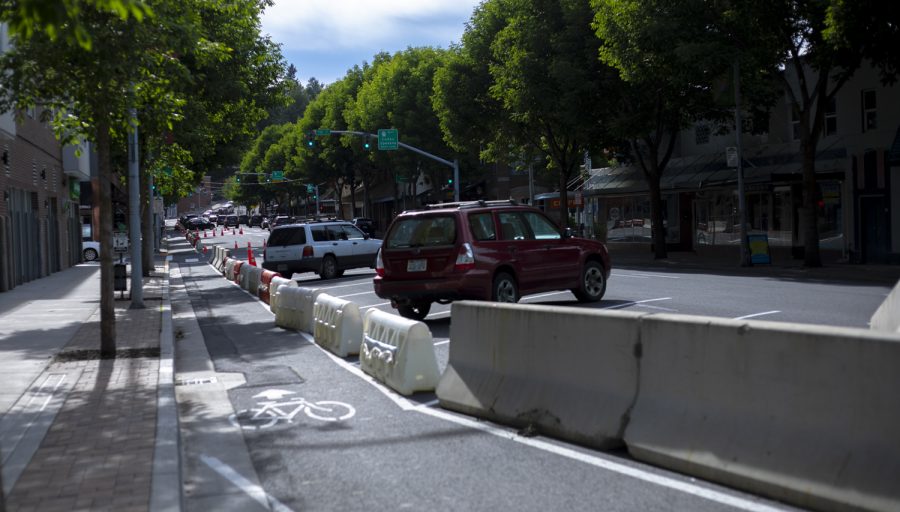 A temporary bike lane and back-in angled parking spots have been added to Main Street. The trial will continue until September.

Temporary pop-up trials of back-in angled parking spots and a bike lane are on Main Street until the end of September. The trial cost the city less than $5,000.

Clayton Forsmann, Pullman deputy public works director, said the city will keep the pop-up trial going as long as it is functioning without issues. The idea for the trials came from the city’s Central Business District master plan.

Public Works Director Kevin Gardes said the master plan aims to enhance the energy and the public spaces in downtown Pullman, like Pine Street and High Street Plaza, with streetscape.

The ideas proposed in the master plan included having bike lanes, back-in angled parking and reduced traffic lanes. The lanes will decrease from three to two, he said.

Forsmann said the city had to get approval from the Washington State Department of Transportation because Main Street is a state highway.

Pullman City Council approved the pop-up trials and there have also been conversations about the trials with downtown businesses, Gardes said.

Forsmann said WSDOT and the city worked together last month to develop plans for revisions on Main Street.

The three lanes on Main Street will be changed to two lanes of traffic, which will create more space, he said.

WSDOT and the city looked at the street’s traffic volumes, and based on that, Main Street should function adequately with two lanes, he said. The extra space will then be used to change the parallel parking that is on the south side of Main Street to back-in angled parking.

There will also be an addition of a bike lane, Forsmann said.

Gardes said consulting with BDS Planning and Urban Design and the city’s research led them to decide on back-in angled parking rather than pull-in parking because it is safer.

This also allows for an increase in seven additional parking spaces on Main Street, Gardes said. There will also be barriers to separate the bike lane from the parking spots.

This would provide equal accessibility for pedestrians, bikes and cars, he said.

Gardes said having the pop-up trials over the summer and early fall gives the city a sense of how the changes work with and without students present in Pullman.

“It’s a way to try out a bigger concept and get some really good feedback now without spending a whole lot of money,” he said.

Feedback can be sent to pwprojects@pullman-wa.gov.