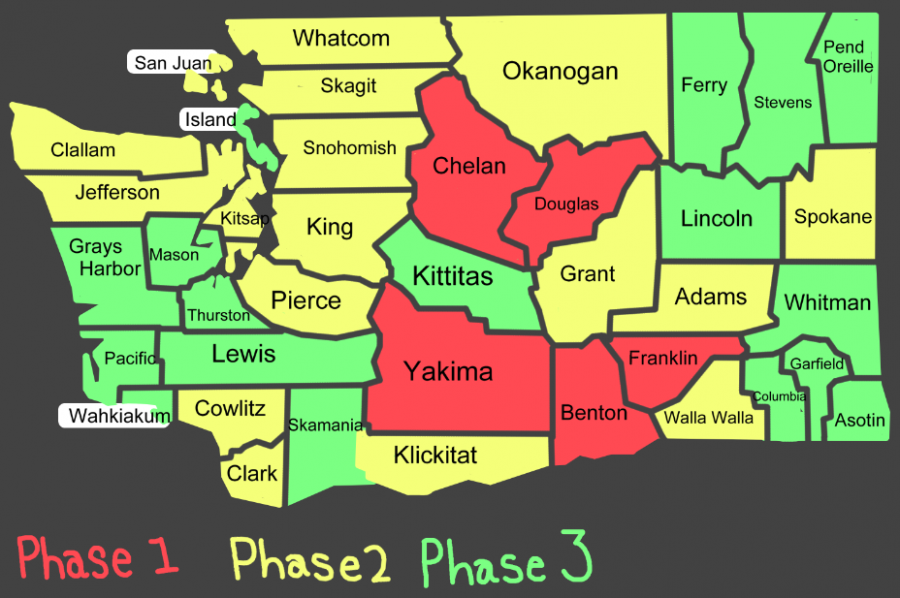 Gov. Jay Inslee and Secretary of Health John Wiesman announced that counties in Washington will not be allowed to move to Phase 4. However, the decision will not change much for Whitman County.

Statewide, there has been an increase in coronavirus cases, said Troy Henderson, Whitman County Public Health Director. He said he believes this is the reason for the decision.

While Whitman County has seen a slight increase in coronavirus cases within the last few weeks, he said, other Washington counties have also seen an increase.

There have been 41 positive cases in the county, according to the Whitman County Public Health website.

Officials in Whitman County were not considering applying for Phase 4 in the next few weeks, Henderson said.

“Currently at this time, it does not affect us in any way,” Henderson said.

People in states like California, Florida and Arizona were not taking the proper precautions, and with the increase in positive cases, they have been forced to take more precautions, said Pullman Mayor Glenn Johnson.

He understands the governor’s decision to pause the move to Phase 4 because of higher coronavirus case numbers in Washington. He said he realizes there is a need for caution.

“You see some of the people that are not wearing masks and not trying to do the best job they can to try to keep this contained,” Johnson said.

However, he said he has seen people taking safety measures in Pullman by wearing masks and social distancing.

Henderson said he would not have recommended Whitman County move to Phase 4 anytime soon even before the decision when counties could technically progress to Phase 4. Moving to a new phase is a collective decision and not Henderson’s decision alone.

“I would not have recommended that the Whitman County apply to Phase 4 prior to the [WSU] student body returning and us finding out how that affects the viral load within the county,” he said.

This increase in people accounts for 40 percent of Whitman County’s population and triples the density of Pullman, he said. This surge will occur in a short period of time.

The governor’s decision does not impact WSU all that much, said Phil Weiler, Vice President for Marketing and Communications.

He said he does not think it will change anything when students come back in August to Pullman because WSU, as a higher educational institution, is considered an essential service.

The university has five campuses as well as extension offices, research centers and educational facilities statewide. WSU will have to navigate different opening phases occurring all over the state, according to Inslee’s guidance for higher institutions.

Last week, Inslee provided a plan for universities to reopen in the fall.

WSU will be holding both in-person and online classes, Weiler said.

“We need to be flexible and understand that what works for one campus won’t necessarily work for another, and if things improve, and we can pivot to more face-to-face, that’s great,” Weiler said. “If things for some reason do get worse, we need to be able to very quickly shift from face-to-face to online if the situation requires it.”