Doctors performed brain surgery on HoneyBee last month; she is currently back home with family, her toys 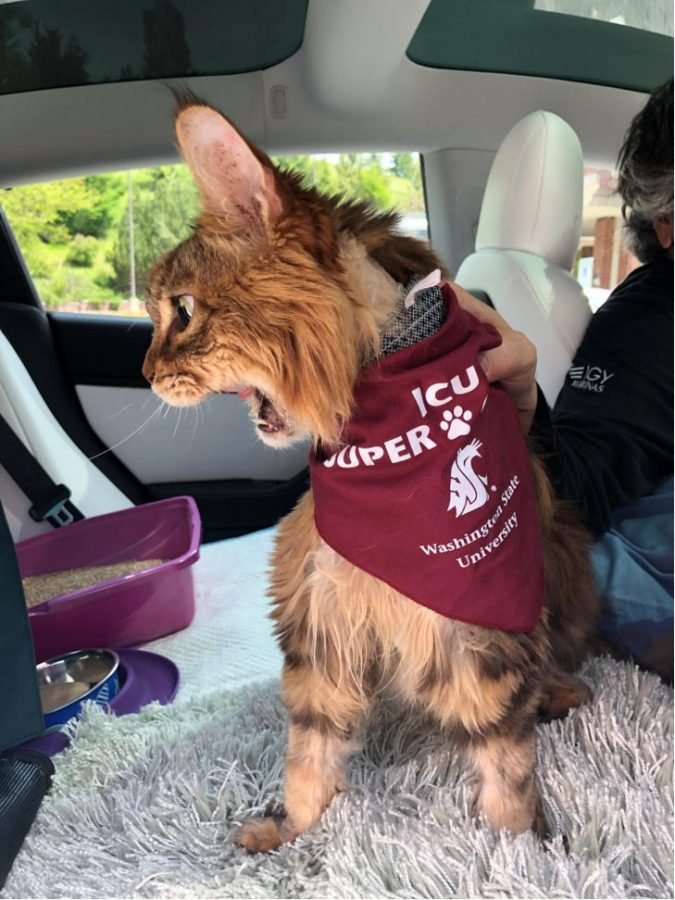 HoneyBee, a 10-year-old retired purebred Maine Coon show cat, sat comfortably in her owners’ car on June 11 with an “ICU SUPER COUG” bandana around her neck. This was the same day HoneyBee was discharged from WSU’s Veterinary Teaching Hospital after undergoing brain surgery, which she is now recovering from at home.

HoneyBee was born in Japan and moved to the U.S. at 4 months old to be a show cat. Mollie and Brian Mansfield, HoneyBee’s owners, said they met her December 2010 at a Seattle cat show. HoneyBee started living with them July 2011 after they adopted her.

“We held [HoneyBee] with her beautiful, silky fur, her wonderful personality,” Mollie said. “She kind of draped in our arms. We just fell in love with her.”

In November, HoneyBee’s health began to decline, Mollie said. She was losing hair and weight. She was also excessively drinking water and peeing.

HoneyBee was taken to Tumwater Veterinary Hospital where she was diagnosed with diabetes mellitus. This condition occurs when the body is unable to produce enough insulin to regulate high glucose or blood sugar levels.

Dr. Tina Owen, a clinical associate professor at WSU’s College of Veterinary Medicine, said the diabetes mellitus was secondary to the original problem HoneyBee had: a pituitary gland tumor, which is located at the base of the brain.

Owen said the tumor overproduces growth hormones, which causes the body to become insulin-resistant. It makes it difficult for the body to control the overproduction of glucose in the blood, which manifests itself as diabetes mellitus.

“With HoneyBee on death’s doorstep, we weren’t sure even a little later could she make that trip and go through an extensive surgery,” Mollie said.

HoneyBee’s owners admitted her to VTH on June 1.

On June 3, Owen removed the tumor from HoneyBee’s brain. Owen said this type of surgery is an open-mouth procedure that takes about four to six hours. The soft palate on the mouth’s roof is cut to gain access to the base of the skull where the pituitary gland lies.

The goal of the surgery was to decrease the need for insulin or to completely eliminate it, she said. With the removal of the tumor, HoneyBee is now taking two units of insulin per day.

“HoneyBee did incredibly well,” Owen said. “She recovered from the surgery quite readily and pretty rapidly.”

Owen has performed more than 75 pituitary surgeries, according to a WSU Insider article, and was one of the country’s first veterinarians to perform this type of surgery. It was her first time conducting the surgery on a Maine Coon.

HoneyBee’s anatomy is a little different due to having a larger skull than other cats. Owen said this made the surgical procedure interesting. Another fascinating component of HoneyBee’s condition is that a pituitary gland tumor is unusual for female cats, she said.

Mollie said neurology resident Dr. Hilary Wright spent a lot of time with HoneyBee during her 10-night stay at the hospital. HoneyBee would often accompany Wright in her office. Wright also sent a lot of pictures to the Mansfields to keep them updated on HoneyBee’s health.

“It looked to me like HoneyBee was having a good time, playing with her wand toys,” Mollie said. “I think they bonded — going around with [Wright] who carried her around and worked with her.”

Due to COVID-19 safety guidelines, the Mansfields were not able to visit HoneyBee during her stay in the hospital. Brian said this was a challenge for them, but they trusted the veterinary team to care for HoneyBee.

Brian said the staff kept them well informed of any updates on HoneyBee. The Mansfields also met with Owen via Zoom.

“They just are so amazing about keeping you right in the loop,” Mollie said.

Mollie credits HoneyBee’s personality for surviving the surgery. She said HoneyBee’s will to adapt began during her kitten years as a show cat.

“Just with her background of being shown as a kitten up and down the west coast, [HoneyBee] has a personality that is very adaptable to change,” Mollie said. “That really linked up with this WSU, six-hour drive to Pullman and her experiences at the hospital.”

Back at her home in Olympia, HoneyBee is spending a considerable amount of time napping. Her owners say she loves to sit near her food bowl. HoneyBee’s appetite improved, and she currently weighs 12 pounds.

“I see the sparkle, her alertness in her eyes, the jumping she loves to do, her stronger legs, her beautiful, silky fur coat,” Mollie said.

Although HoneyBee has stopped chasing objects around the house, she still loves to play with her owners.

“[HoneyBee] looks like the stock market,” Mollie said, “just going up and down.”