The compound BPA could be harming your children 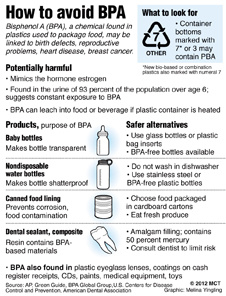 These endocrine disruptors, also known as phthalates, are plasticizers that are used in the plastic making process and are found in almost anything that is plastic, according to The Breast Cancer Fund (BCF), an organization that works to identify potentially harmful chemicals. Not only are they used in plastic but they are also used to line tin cans, including soda and soup.  Even your typical supermarket receipt is covered in phthalates.

The industrial chemical found in these compounds known as Bisphenol A or BPA should be banned from use in any food or water containers.

BPA is a synthetic carbon based compound belonging to the group of diphenylmethanes and bisphenols. About five million tons of this estrogen mimicking chemical was produced in 2008 and production is predicted to increase to six million tons by 2015, according to the BCF.  BPA has been proven to have hormone like properties that resemble estrogen.  While not as strong as estrogen, its effects are real.

According to the Breast Cancer fund, “BPA is a synthetic estrogen that can disrupt the hormone system, particularly when exposures occur while babies are still in the womb or in early life. Even miniscule exposures increase risks for breast cancer, prostate cancer, infertility, early puberty, metabolic disorders, and type-2 diabetes.”

The BCF also cites studies that say measurable amounts of BPA are being found in air, house dust and drinking water.

BPA can easily make its way into the human bloodstream by leaching out from the plastic food containers into the food. According to the BCF, “Because BPA is an unstable compound and is also lipophilic (fat-seeking), it can leach into food products, especially when heated.”

The BCF also published a study in the journal Environmental Health Perspectives, confirming that levels of BPA in the bloodstream rapidly increase with the consumption of food originating from containers that utilize BPA.

One of the most dangerous aspects of BPA is exposure for the duration of utero from the mother.  During utero, hormone balance is of upmost importance.  According to the National Geographic documentary “The Testosterone Factor,” levels of estrogen and testosterone during utero influence the type of development of the brain.

According to Science Daily, “The latest research from the University of Missouri shows that BPA causes male deer mice to become demasculinized and behave more like females in their spatial navigational abilities, leading scientists to conclude that exposure to BPA during human development could be damaging to behavioral and cognitive traits that are unique to each sex and important in reproduction.”

With all the controversy regarding this compound, the FDA has banned BPA from baby bottles and baby formula. The European Food Safety Authority and Health Canada have also done the same.

The general consensus among regulatory agencies is that BPA is safe below a certain threshold, but many groups claim that BPA has effects at any level, especially to unborn babies.

If they won’t ban the substance like they should, you can take steps to avoid exposure if you are concerned.  The first step is to stop drinking water out of all plastic containers, cups, and bottles.  The next time you go to the store, avoid touching your receipt as much as possible as receipts have massive amounts of BPA.  Avoid canned foods as much as possible as well.

According to the BCF, “Just a three-day period of limiting intake of packaged foods decreased the concentrations of BPA found in urine by an average 65 percent.”

While it is possible to limit exposure, completely avoiding BPA is almost impossible.  As human beings, we should have the right to not have endocrine disrupting chemicals in our food and water supply.

The FDA should move quickly to further ban this substance.

-Mitch Strang is a senior finance major from Bellevue. He can be contacted at 335-2290 or by opinion@dailyevergreen.com. The opinions expressed in this Column are not necessarily those of the staff of The Daily Evergreen or those of Student Publications.