‘I am Ana Karen Betancourt Macias, and I’m undocumented’ 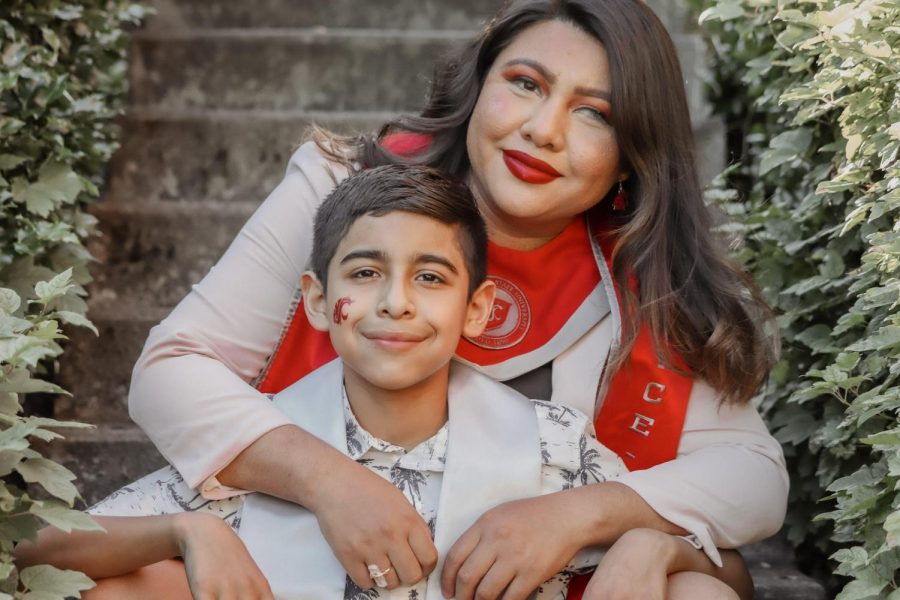 When Ana Karen Betancourt Macias introduces herself, she openly identifies herself as undocumented.

“I introduce myself all the time as ‘I am Ana Karen Betancourt Macias, and I’m undocumented.’” Betancourt Macias, WSU Vancouver graduating senior, said. “That was to make the people in the room feel uncomfortable, but also know that I was a force to reckon with.”

“I sometimes remember dream-like memories of mango trees and orange trees, and just climbing trees, being happy, laughing with my sisters,” she said. “But for some reason, I couldn’t remember.”

She said she went to therapy for a few months and learned that her traumatic experience of crossing the border blocked many of her childhood memories. She and her family were placed in detention centers twice.

“I do remember hearing ‘Oh, you know, a woman got raped last night’ while we were waiting in the middle of God knows where,” Betancourt Macias said. “I do remember when we were in the detention center [that] women [were] crying in the corners.”

Betancourt Macias remembers running for about two hours. They ended up at a Walmart and were taken to Phoenix, Arizona. They were picked up by her dad’s cousin who then drove them to Vancouver, Washington where her dad was working.

Betancourt Macias said language was a barrier she had to overcome when she moved to Vancouver. Her mom encouraged her and her sisters to play instruments and to focus on their education.

In 2007, Betancourt Macias graduated high school in her class’s top 10. It was around that time she found out she was undocumented, she said. A year later, the Great Recession occurred, so she had to focus on helping her family pay for bills rather than attending college.

Betancourt Macias gave birth to her son, Hector, in 2009 when she was 21 years old. At 27, she attended Clark College and received her women’s studies certificate. Betancourt Macias said she transferred to WSU Vancouver to ensure she was close to family and her son was cared for.

“Even though he was born here, I wanted to make sure he knows that his mom was given the opportunity to go to school,” she said. “I want to make sure that he knows that I tried my absolute hardest to give him the best life he could possibly have.”

During her first year at WSU Vancouver, Betancourt Macias served as ASWSUV director of legislative affairs. It was her first time in student government, she said. In that position, she helped lobby for the Washington College Grant, formerly known as the state-need grant.

Betancourt Macias also served as the 2019-2020 ASWSUV vice president. She and her team worked toward a campaign for a bill she started in her previous ASWSUV role.

Gov. Jay Inslee signed the bill, SB 6561, in April. The bill will take effect on July 1, 2021. The bill will provide financial support to undocumented students through low-interest loans, she said.

As part of their campaign for the bill, Betancourt Macias and her team created pins that had orange ribbons and butterflies on them. Those pins were created out of improvisation when they did not have any of the button materials they intended to use, she said.

“It has been the second proudest moment of my life seeing senators, representatives, just amazing humans wearing my pins that came out of desperation,” Betancourt Macias said. “They came out beautiful.”

Hagelganz said her friendship with Betancourt Macias motivated her to support undocumented students. Hagelganz was part of the team that helped craft the pins and lobby in Olympia for SB 6561.

“The bravery that [Betancourt Macias] shows as a woman of color, and not backing down from any obstacles, but really truly just believing that that passion can make a difference and change — seeing that inspired me,” she said.

As ASWSUV vice president, Betancourt Macias led a care package project to help students during the COVID-19 pandemic. The packages consisted of weekly food boxes, hygiene products and materials for children. She and her team served about 60 families per week for two months, Betancourt Macias said.

She said she confidently shares her story to help others feel accepted and empowered to embrace all their experiences.

Betancourt Macias will be graduating this summer from WSU Vancouver with a bachelor’s in sociology. She said she is planning to apply to Harvard University for her master’s degree. She is also considering law school.

“Back when I was 21, I wished I could have read a story like mine,” she said. “I want to make sure that I shared it to allow other single moms to see themselves in me and to fight for the right to education.”