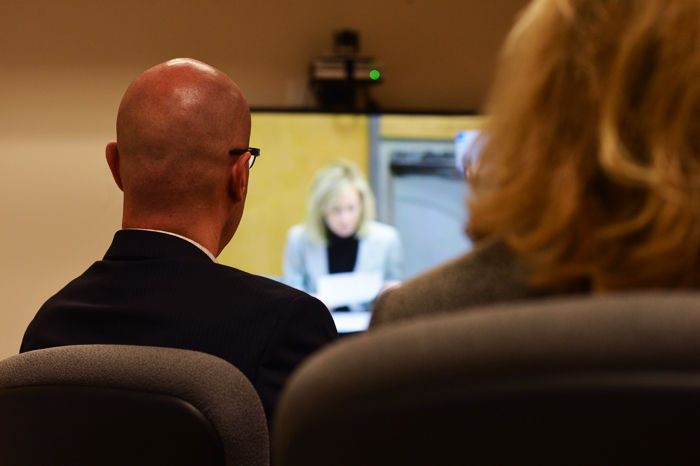 Live streaming of the Board of Regents meeting held Thursday in Tri Cities.

The Board of Regents’ live-stream meeting in Tri Cities Thursday addressed the possibility of naming a new university president today, as well as an award to be given to a deserving regent member.

The Board of Regents announced it is getting closer to narrowing down the search for the new university president.

Interim President Dan Bernardo said while they are keeping things quiet, they are taking care to follow all the rules while interviewing people for the job.

The board has recently faced scrutiny for its secretive search. It’s now possible the regents, pending a vote, could name the new president during their Friday meeting, also in Tri Cities.

Other major topics were communicated and reviewed during this meeting as well.

Bernardo said the Board of Regents will be awarding the Regents Distinguished Alumnus Award to a regent today, during their meeting Thursday afternoon.

“We have two candidates that we affectionately refer to as “F” and “W,” Bernardo said. “Both are highly qualified.”

The recipient of the award will be announced today in executive session.

The board also proposed naming the new cultural center being built after the late President Elson. S. Floyd.

“This project was one he was certainly very passionate about,” Bernardo said. “And with the increase in the diversity of the cultural awareness within all of WSU that president Floyd brought to our campuses, this is certainly a great way to recognize him.”

The Regents said this building will be a nonwestern and nontraditional type of building with the roundness of the roof representing a unity of the community. The location on campus will be in a prominent area.

Vice Provost for Academic Affairs, Erica Austin also discussed a few ways WSU could help retention rates at the university, which have remained the same for the last few years.

“One thing we’ve been doing is becoming more informed in how they succeed and how they fail,” she said.

A potential reason discussed as to why retention rates are staying the same is that students when they first come onto campus and begin school their first year are not always able to successfully navigate their way around the university.

Although the overall retention rates did not increase, low income and first generation students’ rates did.

Also during the meeting the Graduate and Professional Student Association constitution amendment was approved, it has not been revised in over 10 years and is now being amended and shortened.

GPSA is aiming for a more fluid structure of their constitution that can easily adapt.

They then discussed plans for the future of construction at WSU. They went over a capital planning and budgeting process document which listed the projects underway and other projects being planned for.

Among these projects are the Pullman Plant Sciences Building, Global Animal Building, and the ongoing STEM Teaching Labs and building upgrades.

The Board of Regents also elaborated on the discontinuation of several graduate programs. They will discontinue counseling psychology to pursue topics of higher priority.

They discussed several other topics, including the audit reports and investigation for the university.

Heather Lopez, WSU Pullman director of internal audit, said they had one planned audit report and two investigations to discuss for the past year.

“Every year we do our audit and risk assessment to decide the area, subjects and topics that are going to be included in that audit plan,” Lopez said. “There is usually some indicator or flag that has indicated that this is an area that needs to be viewed and audited.”

The flag raised in this case was at the Office of Student Media.

“This particular audit, the Office of Student Media, we first put it on our risk assessment at the end of spring of last year, and put it on the audit plan,” Lopez said. “There were certain indicators that there were some concerns with the administration and overall whole environment.”

She then went on to say by the time they actually went in to investigate there had been management changes and the issue was not significant.