Shay Connell's wish was granted, wanted to give back 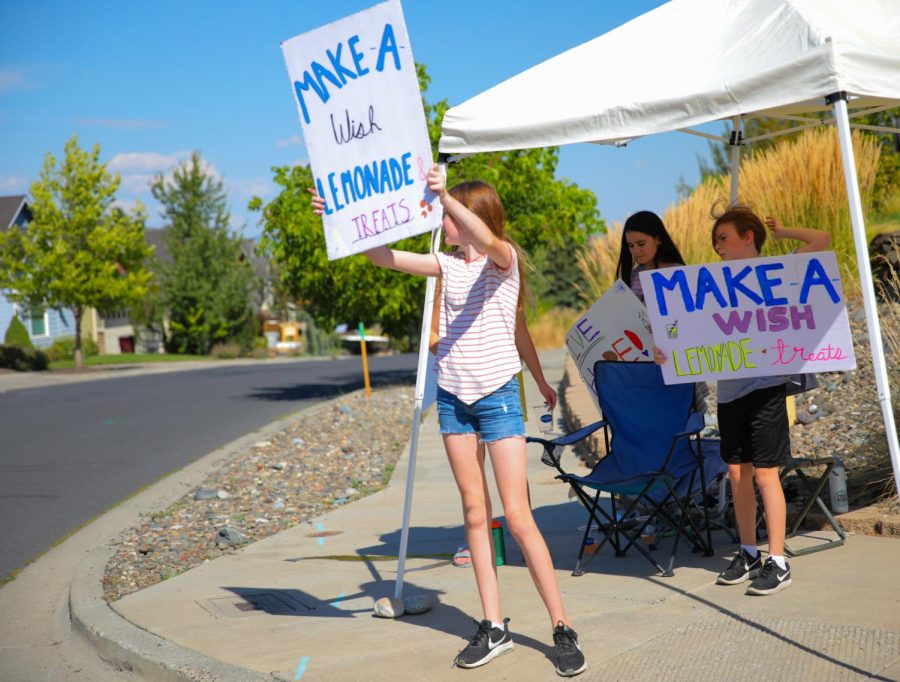 Pullman locals hold signs for their lemonade stand on Aug. 20. All of the proceeds were donated to Make-A-Wish.

For Shay Connell, it all started with a dream to meet a Disney actress. Three years and tens of thousands of dollars later, she is helping to make other children’s dreams come true, too.

Shay raised over $11,000 for Make-A-Wish through her third annual lemonade stand fundraiser Aug. 20.

Together with friends Jack and Marissa Carper, the group more than doubled their $5,000 goal.

Shay, now 11, said she started the stand three years ago as a way to give back after her wish was granted.

Born with half a heart — a single ventricle — Shay underwent four open-heart surgeries by the time she was 4 years old.

“We say her heart is mended. It’s not fixed — it’s not something that can truly be fixed. It’s a mended heart,” Shay’s mother, Colleen Welter, said.

Welter and her husband had not considered getting a wish for Shay until wish granter Kimberly Carper reached out to her.

Kimberly said she saw a story about Shay in the news, then again later on Facebook.

“I called Make-A-Wish and said ‘here’s this family and FYI I want to be one of their wish granters,’” Kimberly said.

Shay wished to meet her favorite actress, Dove Cameron, from the Disney Channel movie, “Descendants.” Her wish was granted around the premiere of the second movie, “Descendants 2.” Shay and her family were flown to Hollywood where she was able to meet the entire cast and sit in on the private premiere screening.

After getting back home, Shay asked her parents how she could get involved with Make-A-Wish.

Kimberly’s kids, Jack and Marissa — now Shay’s friends — hosted a small lemonade stand a few years before during a family garage sale and donated the proceeds to Make-A-Wish. The families decided to collaborate and make it bigger, and now it has become a community event, Welter said.

“We were really ambivalent and hesitant about ‘can we really have this?’” Welter said. “We had all these different phases of what this might look like, but we knew we wanted to do it because these kids have raised so much money for other kids to benefit from wishes.”

Marissa put together a website so those afraid to come in person could still donate online. Welter said $7,000 of the $11,000 raised came from online donations.

“I just think during COVID, everybody needs a bright spot in their life and in their world and in the community,” Welter said. “This kind of represents that to me, to us.”

They also adapted the stand to comply with COVID-19 regulations, requiring masks and requesting everyone to stand 6 feet apart.

“It was really fun to find a way to do this, even with all of COVID,” Jack said. “To make this safe and to keep this tradition.”