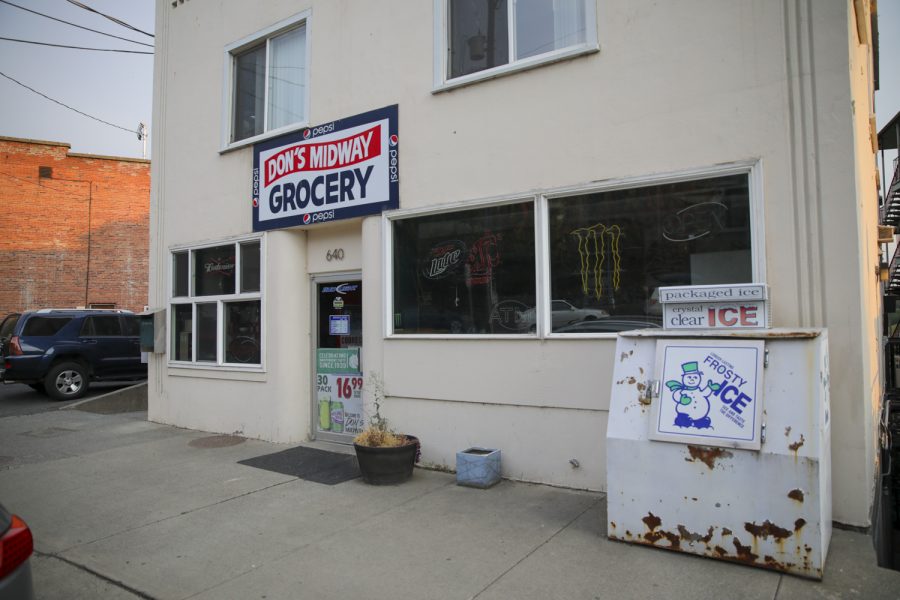 Don’s Midway Grocery plans to reopen when there are fewer COVID-19 cases.

Don’s Midway Grocery closed indefinitely, said co-owner David Molner. Molner said he worried that students would not follow social distancing, and the recent spike in cases confirmed his fears that opening would be unsafe.

“I can remember being 21, 22 years old and being bulletproof,” Molner, 70, said. “[Students] don’t worry too much about social distancing.”

Whitman County reported 30 new cases on Aug. 22, followed by 39 on Aug. 23, and 49 positive COVID-19 cases on Aug. 25. According to the press releases, the majority of positive cases are in college-age people.

The increase in cases is exclusive to Pullman, according to the Whitman County Department of Public Health on Aug. 24.

Don’s normally closes for the summer, Molner said, but this year, the grocery store took its annual break earlier than usual and closed March 9. Though the owners want to reopen, Molner said he did not want to put himself or his wife, co-owner Karen Molner, in harm’s way.

The Coug, a local bar and grill, also shut down indefinitely after an employee tested positive for the virus. The Coug declined to comment to the Evergreen about the decision, but wrote on its Twitter feed that the choice was “out of an abundance of caution.”

The Coug closed early today & will remain closed the rest of today. This is out of an abundance of caution. A staff member received a positive test result this afternoon.

The staff member in question last worked Saturday evening from 7PM to close. He followed all mask & glove protocols. He had no symptoms.

The staff member wore gloves, followed cleaning protocols and displayed no symptoms of the virus, according to The Coug’s Twitter post. The Coug closed in June for similar reasons.

Rico’s Pub also had an employee test positive for the virus more than one week ago, said Rico’s manager John Landers. This employee will not be allowed on the property until they follow the proper procedures to be cleared for work, he said.

All Rico’s employees were tested. The results showed that no other employee contracted the virus, Landers said.

Although the public house followed sanitation procedures and contact tracing, owner Tawny Szumlas said with the current spike in local cases, Rico’s will not be the last business to experience this.

“It’s not a Rico’s thing, it’s not a Coug thing,” she said. “We’re all at some point going to come in contact with someone who [tested positive].”

Managers and owners who want to keep businesses open should continue to enforce masks, social distancing and other recommendations from the state, he said. Staff in high-risk categories should stay home, he said.

“I have a tremendous amount of empathy for folks trying to maintain their business right now,” he said.

Karen Molner said Don’s did not have the opportunity to downsize its inventory when it closed in early March, leading to food waste and financial hardship for the business.

David Molner said he wants to reopen when cases plateau. He said he hopes this happens sometime in September.

“Now there’s no football, no Dad’s Weekend, no alumni coming back,” David Molner said. “That was a huge part of our fall semester.”

Henderson said those who want to support businesses need to practice safe measures both in and outside of them. Large parties violate both city and state ordinances even if everyone wears a mask, and he said people need to consider visiting with friends outdoors.

Szumlas said Rico’s can almost guarantee a clean environment, but businesses cannot control their employees outside of work. Gov. Jay Inslee announced in July that bars must stop serving alcohol after a certain time. While Rico’s will not serve alcohol past 11 p.m., hours of operation for dine-in remain the same, Szumlas said.

Rico’s Pub has curbside, takeout and delivery options available from 11 a.m. to 8 p.m. Landers said these choices exist for those who do not want to wear a mask or be in the pub, but anyone who does not wear a mask will have to leave the property.

“I don’t know if I can throw any more bleach down,” Szumlas said. “When it’s safe to [fully] reopen, we will reopen, but really that’s the best we can do.”