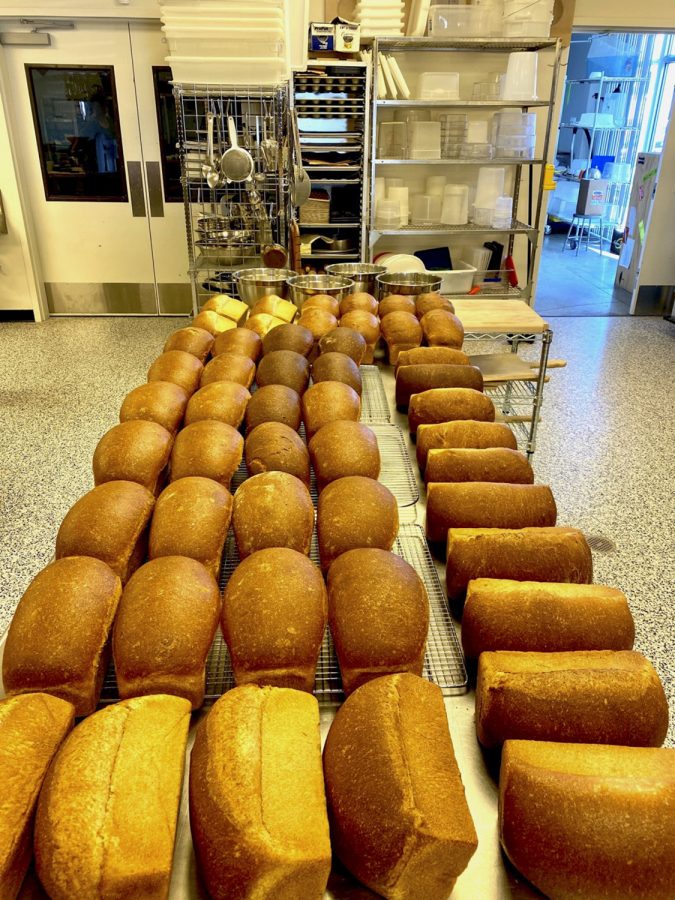 The WSU Bread Lab works with farmers and bakers. About 60 loaves are delivered monthly to the Skagit Friendship House.

For WSU Bread Lab staff, delivering free loaves of bread is a way to bake for good and feed those in need.

The Bread Lab – located in Burlington, Washington, north of Everett – is a nonprofit that conducts research on wheat breeding. The lab works with farmers to develop new varieties of wheat, rye and barley. It also works with bakers to create nutritious, high-quality food, said Bread Lab Director Stephen Jones.

Since March, Bread Lab staff have delivered more than 6,ooo loaves of bread to schools and food pantries in the Skagit Valley because of the COVID-19 pandemic. Jones said this effort is a partnership between the Bread Lab and its partner King Arthur Baking Company, which has a baking school at the lab.

He said King Arthur Baking Company decided to keep its teachers and bakers employed amid the COVID-19 pandemic, using that opportunity to bake for good.

“It’s inspiring to see a company like King Arthur say ‘We’re not laying off our bakers. We have zero income right now, but we’re going to bake for good,’” Jones said.

Schools, food banks and pantries in the community struggled to buy bread and ingredients like flour and yeast from April to May, he said.

“King Arthur was able to keep baking because they have the supplies,” Jones said. “With bread on short demand, they were able to fill that void.”

Jones and his team, which consists of four WSU doctoral students and three other staff members, facilitate bread deliveries to different groups in the Skagit Valley. Jones said he has delivered several loaves using his personal car.

“For me, it was quite emotional to see the change in these food pantries or the school system,” he said. “To see that occur and to realize that each of these families have a tremendous need is humbling.”

He said the program provides lunches to homeless individuals. It also feeds those who are staying in the organization’s shelters.

Hoffman said he heard a story about the struggle a father and son have with food insecurity.

“They were very grateful for the sack lunch program because they said ‘without it, we would be shoplifting at Walmart,’” he said.

Hoffman said about 60 loaves are delivered monthly to the Skagit Friendship House, depending on the availability of bread.

“As a chef providing food for people, I certainly feel honored to be able to provide this super high-quality bread that just smells so fantastic,” he said.

The donated loaves of bread have a soft texture, Jones said. They contain fewer than seven ingredients, including honey and a high percentage of wheat. The loaves are called approachable loaves.

He said the Bread Lab staff developed the approachable loaf after visiting a food pantry about four years ago. As scientists, the staff were interested in providing quality bread to the community.

“Part of our research was to develop that style of bread in a way that it would be approachable and accessible to all members of our community,” Jones said.

The loaves are sliced before they are delivered because some people do not have bread knives. As part of its operations, the Bread Lab uses its research to assist King Arthur Baking Company with the baking process, Jones said.

Jones said COVID-19 has not drastically impacted the Bread Lab’s operations. Staff are still able to conduct their wheat research in the fields. However, the lab is not open to the public anymore, which is a big change because they used to have bakers, millers and chefs visit the facility.

The Bread Lab’s efforts have not gone unnoticed, Jones said. The lab receives letters of appreciation from various community members.

“The appreciation you receive and the friendships you develop …  is quite inspirational for all of us and for King Arthur as well,” he said.