Petition for mural gained over 1,400 signatures; budget, location, design not yet finalized 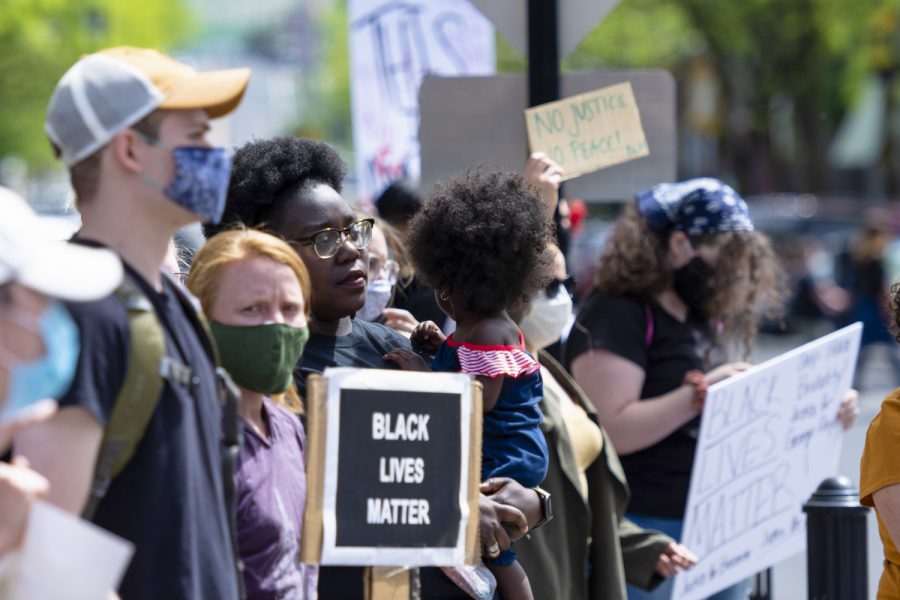 Demonstrators for Black Lives Matter protested the death of George Floyd, a Minnesota man killed by police, June 3 at the Friendship Square in Moscow.

The approval of a Black Lives Matter mural downtown is not the end goal for local activists, but a call for the City of Pullman to show support for people of color in the community.

“It feels a little performative, but a mural has a large impact,” she said.

The idea for the mural came from a group of WSU students and community members who have been organizing marches and attending bi-monthly meetings, Ndambuki said. The group proposed the idea to City Council in July and it was unanimously approved.

Over 1,400 signatures have been collected on a Change.org petition for the mural, Ndambuki said.

“A lot of people in Pullman are not ready to have the conversation about the reality of racism,” she said. “Art is a good way to open up dialogue.”

The City Council and Pullman Arts Commission will decide the budget, location and design at a later date, Ndambuki said.

Jason Kennedy, a Black Pullman resident, said he and other community members proposed the idea of the mural to City Council.

“I’m not a politician, I’m not a leader, I’m not the head of the group — this is something that’s not me,” Kennedy said. “I’m using my platform, my loudness and my personality to amplify a voice for a lot of people in this area that are scared to.”

While leading some of BLM demonstrations in town, Kennedy said he was always asked what was the next step. He said he saw the impact murals had in other cities and he wanted one in Pullman.

Kennedy and other activists have faced backlash for their participation in the BLM movement, he said.

“I’ve had people throw stuff at my truck in my driveway, water bottles were thrown at protesters, and I’ve been called slurs while driving down the road,” he said.

The mural is a way for Pullman to show its support for communities of color. Kennedy said the collaboration between Pullman and its community will set a precedent for itself and other surrounding cities.

“This is something that I’m trying to do for the next generation of kids and the generation after that,” he said. “I want them to know that when they come into downtown Pullman they know that, as a person of color, ‘You are welcome here, you are equal here.’”

Kennedy said the Pullman community is connected to WSU and the university’s mantra ‘Cougs help Cougs’ needs to continue within the community.