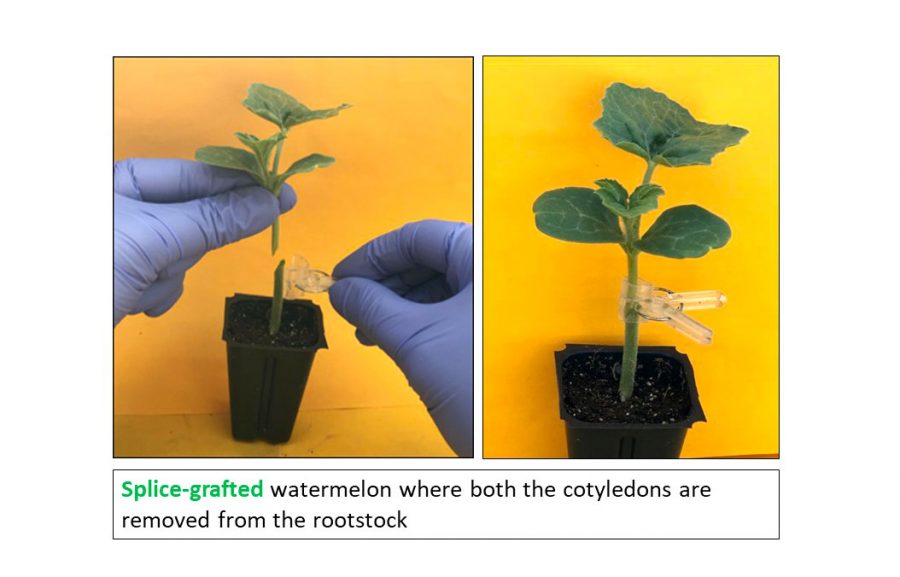 Splice grafting involves growers finding the most compatible rootstock and attaching its roots to a growing watermelon vine.

WSU researchers at the Department of Horticulture found that splice grafting, a centuries-old technique that attaches roots of other plants to a growing watermelon vine, could help watermelons build resistance to Verticillium wilt. This disease is caused by the fungus Verticillium dahliae.

“Watermelons have no resistance [to the disease], so there’s no amount of breeding you can do to build that resistance,” Miles said.

Splice grafting involves growers finding the most compatible rootstock for the plant in question. For this study, squash root became the perfect candidate.

“Inside plants, you have vessels like humans have veins,” Miles said. “When you cut the two plants together, if the veins are not aligned, then the nutrients and the water cannot run up and down.”

Pinki Devi, Miles’ graduate research student, said this process has been used since the 1930s in Japan when farmers found that splice grafting saved time and money.

“Small-scale growers can also use this technique,” Devi said. “We’re not using some high-scale technique.”

Miles said she wanted to ensure food quality did not decrease in the process of grafting the plants. When researchers compared dead, non-grafted watermelon plants to thriving splice-grafted plants, she said the answer was “pretty clear.”

“Watermelon grafting has a potential to increase the production of watermelon in the United States,” Devi said.

Another benefit extends beyond smaller farms and garden enthusiasts. Splice grafting as a way of preventing disease could help farmers avoid fumigating diseased crops, Miles said. This could have lasting positive environmental effects, she said.

“If you don’t need to fumigate, you’ve basically eliminated the chemical from the environment,” Miles said.

Problems with standardized grafting include cost and time, Devi said.

Miles said Devi is her fourth student to work on this research, which has been going on for nearly 14 years.

The study was funded by the U.S. Department of Agriculture through a crop research grant. Miles said researchers worked on this study on a national level. WSU collaborated with North Carolina State University and Oregon State University to help with their findings.

In the future, Devi said researchers want to learn why only certain plants can successfully graft while others cannot.

“Not all rootstock is compatible with all watermelon,” Miles said. “To me, academically, that’s interesting.”

Devi said she hopes growers can find better ways of growing watermelon in Washington with their findings and future research.

“Our goal is to help small-scale growers so that they can graft their own watermelon,” Devi said.