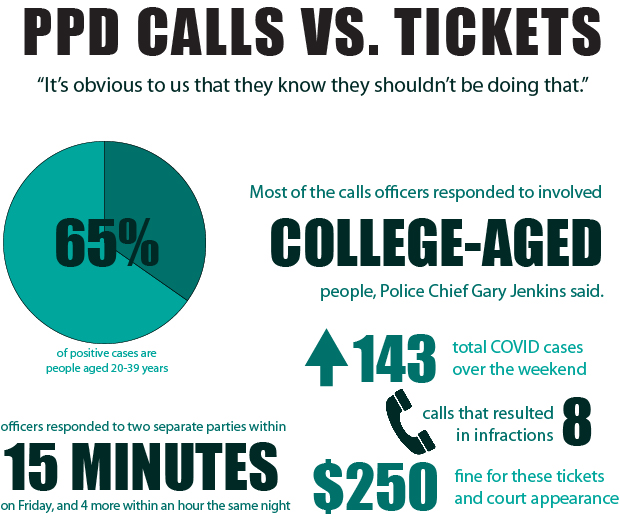 Of the 509 positive cases, 331 or 65 percent are reported in people aged 20-39 years, according to the Whitman County press release.

Pullman Police responded to at least 35 calls of social distancing and noise violations between Thursday and Sunday, according to police logs.

Police officers issued a total of eight tickets over this time, said Police Chief Gary Jenkins. The other calls were determined not to violate social distancing or mask ordinances.

“What we’ve been looking for is a nuisance party ordinance violation,” Jenkins said. “When we go to a party and if they have more than 10 people … if they’re not social distancing, if they’re not wearing masks, we’re issuing tickets to the hosts.”

“A few of the calls [officers] went on, as soon as they saw the officer, they left the area so the officer wouldn’t see them,” Jenkins said. “It’s obvious to us that they know they shouldn’t be doing that.”

Whitman County public health officials announced a running total of 509 cases after 24 more positive results came through on Monday, according to a press release from Whitman County Emergency Operations Center.

Jenkins said most of the calls officers responded to involved college-aged people, and the numbers seem to confirm this. Of the 509 positive cases, 331 or 65 percent are reported in people aged 20-39 years, according to the Whitman County press release.

Officers responded to several civil and noise violations that occurred near campus, according to the police logs. The officers responded multiple times to addresses on Crestview Street, C Street, Maple Street and Brandi Way, all of which have student housing complexes.

On Friday evening, officers responded to two separate parties within 15 minutes of each other, according to the police logs. As many as 30 people may have attended. The same night, four more calls came in within one hour of each other.

These were not all of the outbreak-related calls made on Saturday, which totaled 16. This does not include civil calls or code violations, both of which could have involved mask or social distancing complaints, though the logs do not specify.

While at least eight calls did result in infractions, the majority of calls did not show evidence of a city ordinance violation, according to the logs and Jenkins.

A caller on Saturday reported a gathering of about 13 people on a rooftop, but when officers responded, they were unable to locate the alleged violation. Another caller that night reported “a large party, no masks,” but officers found no violation occurred.

Jenkins said many Pullman residents are taking it upon themselves to hold neighbors accountable.

“They’re scared to go to the grocery store and gas station and other places in the community because they feel that students are not being respectful of the community,” Jenkins said.

He said police officers must respond to calls in order to stifle the increase in COVID-19 cases, and residents who follow guidelines should not fear getting a ticket.

Tickets issued for these violations can lead to a fine of up to $250, as well as a mandated court appearance after the second infraction.

Jenkins said this may seem harsh for younger students, but the other option is to charge people with misdemeanors for not wearing a mask, which carries a heavier punishment.

“We’re actually engaging in the least intrusive and lowest level of enforcement that we can,” Jenkins said.