The color of gold: #OscarsSOWhite and its racial reality 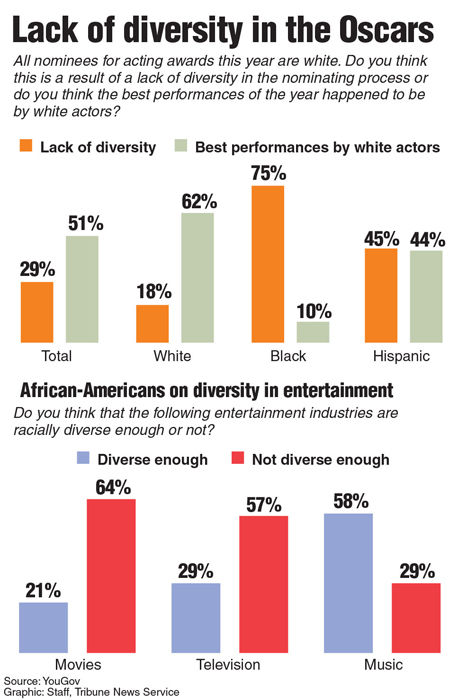 Poll asking Americans views on diversity in the Oscars.

How do you get all-white nominees in the 20 spots for lead and supporting actor roles for two years in a row?

I’ll explain how, why it is not good news and why it deserves to be discussed and critiqued.

What does it say when we are constantly seeing nuanced, fleshed-out roles of incredible depth allocated to white actors, while actors of color are made to play roles that are mere fractions of what their counterparts are being given?

The debate about the Oscars is so prevalent, even President Barack Obama weighed in, saying, “I think that when everyone’s story is told, then that makes for better art. It makes for better entertainment. It makes everybody feel part of one American family. So I think, as a whole, the industry should do what every other industry should do – which is to look for talent, provide opportunity to everybody… I think the Oscar debate is really just an expression of this broader issue. Are we making sure that everybody is getting a fair shot?”

The short answer is no.

However, what about films like “Star Wars: The Force Awakens”, which featured a nuanced character of color – Finn, played by John Boyega?

Unfortunately, “Star Wars” is “the kind of big-studio release that [has] been historically dismissed as popcorn fare. These days, critics… are less beholden to certain ideas about the divide between high art and mass art, but clearly a lot of folks in the Academy haven’t gotten that message,” said the New York Times’ chief film critic Manohla Dargis.

Now, with this disparity in the kinds of movies that are noticed by the Academy and the qualities of roles that are given, of course people of color are not going to be up as frequently and for as many awards as white actors are.

“In the Academy Awards’ 88-year history,” according to USA Today, “only 14 black actors have won acting Oscars… The winners’ pool is even shallower for other minorities. A mere five Latino actors have won prizes, as have just three actors of Asian descent.” And actors of indigenous identities? One.

So, with that in mind, want some examples of the kinds of limiting roles that are often given to people of color and effectively bar them from consideration by the Academy?

Well, here are some: the docile, submissive sex toy — I mean, Asian woman; the inherently violent black man; the Native American of few words who dies in 15 minutes or less of screen time; the angry black woman; the spicy Latina – they’re endless.

And the reason why there are endless stereotypes is because making hollow characters is easy and can make an ensured majority of the audience (you got it, white people) laugh or recoil in horror at the villain or enjoy the sexiness of a particular scene, at the cost of the dignity of the representations of people of color. These roles fill seats for the blockbuster movies and add “racial overtones” to the elite dramas, but those actors will not be receiving Oscars.

The problem is deeper than just who is on the ballot. It’s how they get there.

The elite crop of actors from which nominees are selected is overwhelmingly white and our media is full of those representations, because writers can say they are creating diversity when they are actually creating hollow roles and promoting hollow views of certain people that live in our country.

It can be argued that there is “diversity” in media, but it is currently not a diversity of the depth of humanity across racial lines.

It is, for now, a diversity of stereotypes and performances that play into the marginalization and humiliation of people of color.

And that is how you get all-white Oscar nominees for two years in a row.