The combative nature of politics in 2020 is horrible for public discourse, intelligent debate, reasonable conversations 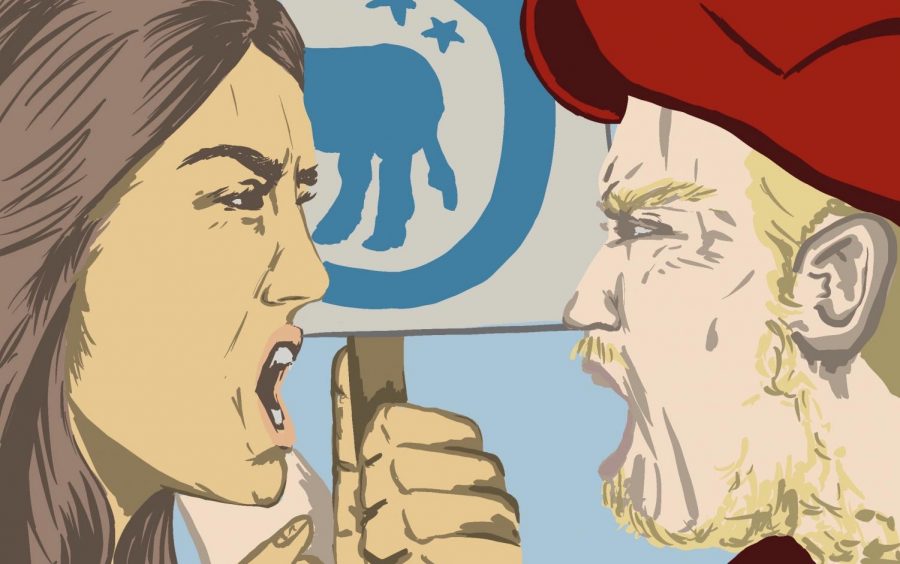 Whether it’s red or blue, there’s always a battle full of demoralizing, rude behavior. Politics in 2020 is tearing families, friends and countries apart.

The U.S. presidential election is less than 60 days away, and many are saying that Nov. 3 might be the most important day in this generation. At the same time, the country is in the middle of an identity crisis.

The sociopolitical climate of the United States seems to be at its most divided point in recent memory, and while the country has been divided on issues before, such as during the civil rights era, it’s significantly more obvious now.

“Partisan polarization is worse today than it has been in 100 years,” said Cornell Clayton, director of The Thomas S. Foley Institute for Public Policy and Public Service at WSU.

Clayton said in our country today, politics have now intertwined with how we define ourselves as individuals.

What we do politically is based on our cultural upbringing, our skin color, our religious beliefs and every other avenue of which we define ourselves.

This year has revealed quite a few things, one of those things being that Americans do not seem to agree on what America is. What one person says about their country may be completely different than their neighbor a few blocks down. One might hear someone say, “This isn’t the America I grew up in.” Unless everyone had grown up in the same context, that statement is met with an eye roll.

Issues regarding race relations and public health — with how far the country has come — should have easy solutions. However, because of how polar our politics have become and how much our politics have come to define who we are as individuals, we are at a standstill.

Who bears responsibility for these things? One might say that this division and unraveling of the social fabric of the U.S. is a collective effort.

“I think that collectively, society is to blame,” Ben White, sophomore elementary education major, said. “When people make snap decisions when they look at their ballots and vote [Republican or Democrat] without thinking about who is the best candidate for the job — I think that is what polarizes the country.”

It is concerning, to say the least, that people are willing to vote for a candidate whose only qualification is that they are not a member of the opposition. What is even more concerning is the growing contempt we have for people with opposing viewpoints because we consider them immoral.

We call each other names like scum and snowflakes, and political pundits fuel this behavior. The worst example I can think of is The Ben Shapiro Show, which advertises tumblers with the words “Liberal Tears” for each subscriber. Their profit is someone’s emotional pain.

In the minds of many Americans, someone’s loss is a win for the country. This is not the recipe for a society that wants to improve its standard of living or recover from a difficult period.

So then where is the country going? Well, as much as we can discuss how this happened and who was responsible, I suggest we look to the future. We can not say that America is dead, or that the country is a failed state because, in reality, this country has never been a finished product.

Generations of Americans in the past defined what America meant for them at that time, and we need to do the same for the present day. We have to come to terms with what America means for us. To do that, we must humble ourselves and acknowledge that we have different approaches. However, we all want the same thing, and that thing is a better country, not just for us as individuals but for our neighbors as well.