Humans are main cause of wildfires; residents encouraged to wear masks in smoky areas, especially if they have health conditions 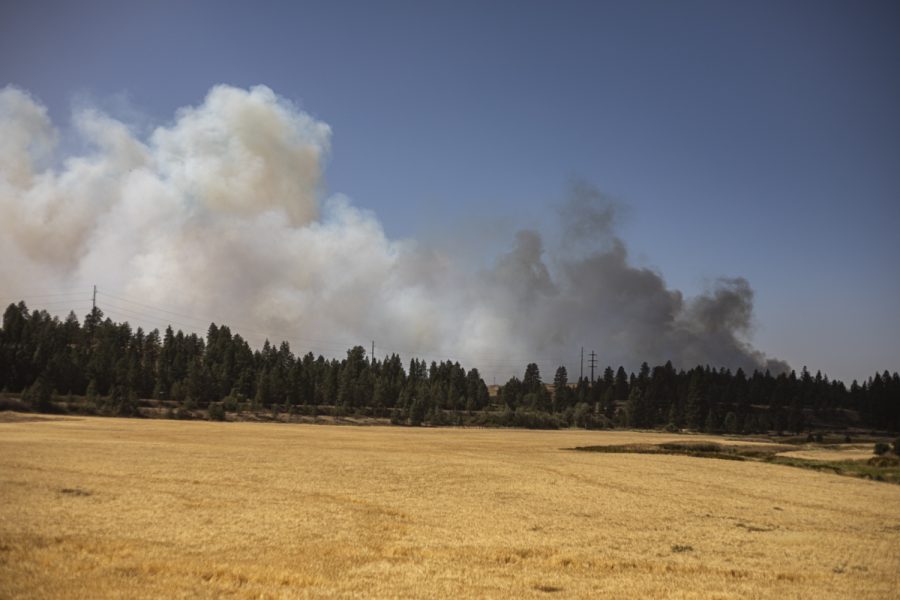 Smoke rises from a wildfire outside of Rosalia. This was one of multiple fires that started Monday around the Palouse.

The wildfire season can begin as early as April in eastern Washington and be much later in western Washington, said Russ Truman, fire manager for the Washington State Department of Natural Resources Pacific Cascade Region.

The majority of wildfires in Washington begin because of humans, he said. However, lighting is the second largest natural cause for fires.

Human-caused wildfires can occur in several ways, like having an outdoor fire pit or campfire where the fire’s embers are blown away, said Tony Nuttman, deputy fire marshal for the Pullman Fire Department.

Before starting a fire, people should make sure that burning a fire is allowed in their area, Truman said.

A good way to prevent future fires is ensuring controlled fires like a campfire are fully extinguished. People should put water on the fire, stir the coals and make sure the coals are wet and cold after they are done using the campfire or fire pit, Nuttman said.

Another way to prevent fires is by watering and mowing lawns during the season to help prevent the spread if a fire did occur, Nuttman said.

There are three levels of fire evacuation in the case that a fire occurs, he said. Level one requires notifying residents so that they are aware there is a fire evacuation. Level two requires that people be ready to leave, and level three requires people to leave an area immediately.

“Safety is the most important,” Nuttman said.

People who live in areas prone to fires should have a bag of personal items like clothes, birth certificates and social security cards ready to go, he said. Fires spread quickly and people might only have three or four minutes to get some of their belongings, he said.

If anyone with health conditions has to go outside in a smoky area, they should wear masks, Truman said. Masks that can be used to protect against smoke can be an N95 or regular disposable ones, Nuttman said.

When inside but near a smoky area, people should close their windows and turn on a fan so smoke does not get inside the house, he said.

If a fire is occurring, people should dial 911, Truman said.