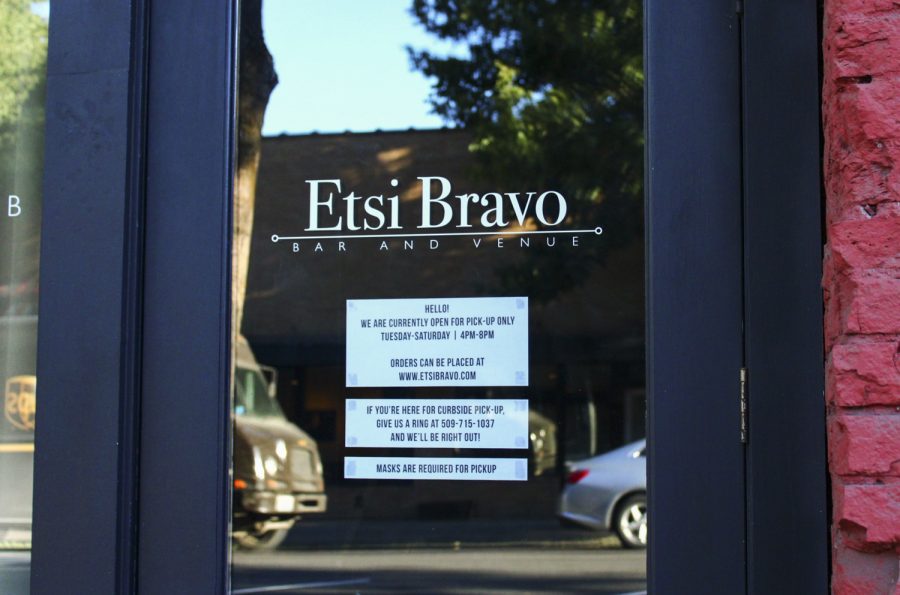 Etsi Bravo would usually serve food from the Black Cypress before the pandemic. The nightclub is back open with its restaurant license to serve to-go options and alcoholic drinks from 4-8 p.m. on Tuesday to Saturday.

Normally, Etsi Bravo is a hot spot for WSU students. It was a place filled with dancing, guest performers and comedy nights. However, due to COVID-19 restrictions, the nightclub almost completely shut down.

Etsi Bravo opened Aug. 28 for customers to order take out food after about six months of being closed with the exception of to-go drink cocktail mixers.

Gov. Jay Inslee gave restaurants the OK to open back up for takeout on May 4. However, many night clubs that did not have a restaurant license had to stay closed, according to the Washington State Department of Health.

Etsi Bravo had to remain closed longer than many Pullman bars because they only had a nightclub license and served food from Black Cypress. In Washington, having a nightclub license means that the business’ revenue has to come from entertainment and alcohol, Cory Preston, owner of Etsi Bravo, said.

“For us, we had to automatically shut down because of our license,” Preston said. “Having a nightclub license we didn’t have any leeway. We couldn’t do limited capacity, we just had to shut down.”

The nightclub’s owners decided to get their restaurant license and serve their own food to reopen, Preston said.

Etsi Bravo has been a popular nightclub in downtown Pullman for the last five years. They feature musicians, have a dance floor and serve specialty cocktails.

“Etsi Bravo is a pretty classy place, but there’s no pressure to act or dress a certain way there,” Lauren Prasanna, a previous customer of Etsi Bravo, said.

Their new menu has mac and cheese, salads and a variety of sandwiches, including $1 PB&J’s.

“We will continue being a restaurant, but we’re not planning on scraping everything we had before,” Preston said. “Basically you’ll still be able to come here and dance, but you’ll also get to have dinner beforehand.”

Since Etsi Bravo is now serving food, they are allowed to sell canned mixed drinks and other alcoholic drinks. The canned mix drinks have been one of the business’s main focus since they reopened to customers over the age of 21.

“I’ve been wanting them to have food,” Prasanna said. “Before when I went there, I used to always get hungry. They had like goldfish bowls, but a real menu would be a nice addition.”

The to-go service is offered from 4-8 p.m. Tuesday to Saturday.

“The response has been overwhelming so far, and we’re doing our best to keep up with it,” Preston said.