Over 80 percent of Malden has been destroyed by the Babbs Fire; it is unclear what started the fires 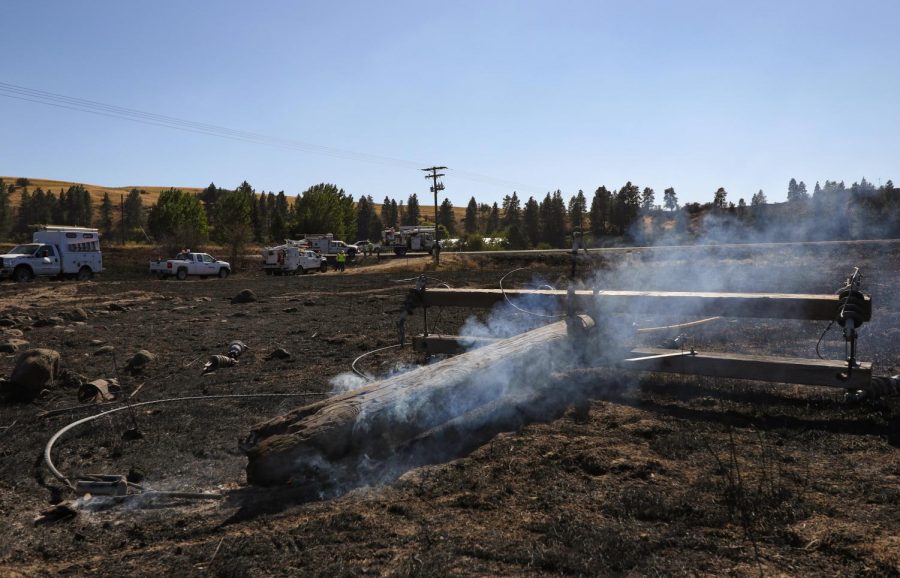 As of Tuesday afternoon, the town of Malden is still without power due to burned and downed power lines. The fire was unpreventable, the Whitman County sheriff says.

Three fires that started in Whitman County on Monday have covered over 12,000 acres, and two continue to burn.

The fire in Malden, known as the Babbs Road Fire for the road it started near, has covered an estimated 8,900 acres so far. As of Tuesday evening, it is zero percent contained, said Sydney McBride, public information officer trainee for the Southeast Washington Interagency team.

Over 80 percent of the town of Malden was destroyed by the fire, Whitman County Sheriff Brett Myers said.

The Manning Fire that affected Pine City has covered 3,100 acres and none of it had been contained as of Tuesday evening, McBride said.

The origin of the fires had not been confirmed on Tuesday evening, Myers said. There have been no reports of casualties due to the three fires.

“[They] left a trail of destruction several miles long and took everything in its path,” Myers said.

The Babbs Road Fire started before noon on Monday. It spurred county and state resources, including sheriffs’ offices and fire departments, to contain it, he said.

The fire was unpreventable due to high winds, standing timber, and other factors, Myers said.

Within two hours, the fire in Malden had burned through the town, sparing some houses and businesses but leveling others, he said. It destroyed business and residential buildings, as well as government structures, with the city hall, library and post office burnt down.

County authorities warned Malden residents to evacuate. County resources responded to the fire within 30 minutes of it arriving in town, Myers said. They were slower in their response to the fire due to other fires in Whitman County, such as the one in Colfax.

Some residents chose to stay and fight the fires while others evacuated, Myers said.

Myers said the sheriff’s office is asking people who have not heard from residents in Malden to contact the office so they will know if anyone is missing.

Malden is under a level three evacuation, McBride said, keeping outsiders from entering what remains of the town.

Pine City, which neighbors Malden, also suffered losses at the hands of the fires on Monday, with Pine City losing more than 50 percent of its buildings due to the fires, Myers said.

The Colfax fire has been completely contained and covered about 5 acres, McBride said.