People of the Palouse: John Rich 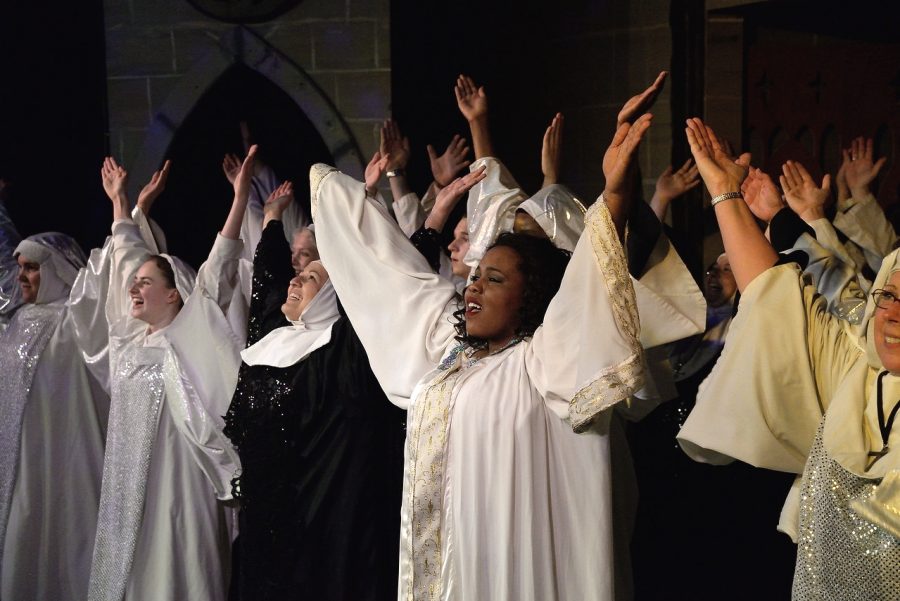 COURTESY OF THE REGIONAL THEATRE OF THE PALOUSE

2017's Sister Act is one of the many shows John Rich and the Regional Theatre of the Palouse have produced.

When John Rich came to visit his college friend Jim Sato in Pullman, he didn’t expect to stay — but he did. Then when he agreed to help out with the local theater scene, he set another ground rule.

“When I first got involved, I got talked into it,” Rich said, “and I said, ‘As long as it doesn’t take over my life.’ I was planning on retiring. But the theater and the arts on the Palouse definitely took over my life.”

Originally from the Los Angeles area, Rich spent his childhood acting in film and primarily theater productions. From the age of five, he worked with such stars as Betty Grable, Eddie Albert and John Raitt.

His love for theater, he said, began even earlier. His mother, an educator who later founded her own private school, took him and his twin sister to plays and other cultural events. He said a showing of “Peter Pan” convinced him to pursue acting.

Rich, a first-generation American with a Canadian mother and a Filipino father. He said his father in particular was sometimes skeptical of his career path, but supported him. He and his sister took academic lessons with a tutor and attended auditions, call-backs and late-night rehearsals.

He wouldn’t get home from those rehearsals until 11 or 12 at night throughout his childhood. Attending college at the University of Southern California, he said, was the first time he experienced formalized schooling.

Sato and Rich met there and both studied in the theater department. Rich’s emphasis was in directing and theater management, while Sato specialized in acting. Sato eventually returned to his hometown of Pullman after college, while Rich traveled around the country to different directing jobs.

Later, when he came to visit Sato in Pullman, he said he cultivated an interest in Pullman Civic Theatre, working as their artistic director for about seven years. But he wanted to do more.

When Rich started Regional Theatre of the Palouse in 2007, Sato was there as one of the founding members. Rich, who had worked as a director with actors like Barry Williams of “The Brady Bunch” fame, wanted to bring an air of professionalism to the local theater scene.

“Because this was my career, and passion, and my focus in life, we don’t play at theater,” he said. “We want to do the best work possible for the money we have.”

This included flying in professional actors for some of the local shows. For this past spring’s scheduled musical, “Thoroughly Modern Millie,” Rich planned to fly in actors from New York City and one from Georgia.

Sandrinne Edstrom, one of the New York-based professional actresses, said she was scheduled to play the lead in “Thoroughly Modern Millie.” Having met with Rich and Todd online in prior months, Edstrom flew out to Pullman in early March.

“Immediately it felt like home,” she said. “John is probably one of the sweetest people I have ever met.”

Edstrom began practices with Rich and Todd, with the other actors scheduled to arrive two weeks later. That changed with the arrival of COVID-19.

The musical was canceled, but Edstrom felt unsafe returning to New York. Rich and Sato continued housing Edstrom in Sato’s childhood home, where they had planned to house several of the traveling actors.

They went grocery shopping together every week, and Edstrom said they would call to check up on her every now and then. When she discovered flooding in the house due to a late-night rainstorm, Rich, Todd and Sato came over right away to fix it.

“It was good to know if anything went wrong, John and Jim and Michael were there for me,” Edstrom said.

With the arrival of COVID-19, Rich said he’s had to change some aspects of RTOP, but they’ve been just as busy. He said they’ve addressed some items on a long-standing to-do list, like renovating the brick walls of the building.

The theater has also been offering study groups, language lessons and summer acting camps, Rich said — all safely social-distanced and sanitized. Recently RTOP has introduced studios in the building where businesses can rent for less than a normal building space would cost.

Rich said the Palouse hasn’t always been the easiest crowd to break into anyway. With the local sports emphasis, he said, sometimes funding has been hard. Todd said it takes all kinds of support — whether it’s helping build sets, auditioning or taking part in workshops — to keep RTOP at its fullest potential.

“If we want the arts to thrive on the Palouse, we need people to be artists,” Todd said.

But Edstrom said Rich works hard to keep RTOP running and offering the best theater experience in the area.

“I feel like he’s a renaissance man in that he has so many skills he offers,” Edstrom said. “He directs and produces and does the costuming … usually that’s a job for five different people, but he does it all.”

Todd agreed, saying a lot of the work has fallen on Rich’s shoulders over the years. As associate director, he’s been taking charge of some productions, taking Rich’s influence and developing his own directorial style.

Under Rich’s tutelage, Todd said he’s on track to take some of the pressure off and continue his work at RTOP in the coming years.

“After founding RTOP in 2007, [Rich] has been working nonstop creating an artistic oasis in the wheat fields,” Todd said.

Rich said that working hard at theater is just what he’s always done.