People of the Palouse: Azzah Sultan 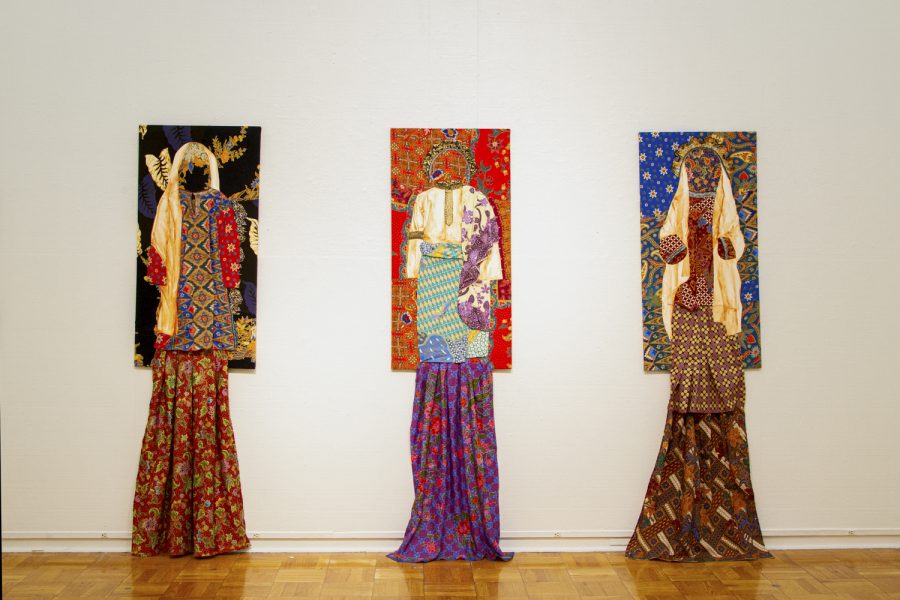 The name came from a pet name her mother called her as a child, and the exhibit was created through fabrics and spices from her hometown in Malaysia.  She said she made the pieces to specifically reflect the idea of a young, unmarried child in different forms. It left out her face and parts of the body, so the girl was only represented by fabrics and other items representing cultural identity.

“So in a way, it’s not necessarily focusing on the color of my skin, how I look, but mostly representing my identity through formal qualities of my culture through spices, food, sound, smells, colors [and textures.]”

Sultan said her experience as a brown Muslim woman drives her art, drawing upon interactions in the U.S. or family and cultural experience to make works like “Anak Dara.”

“Whenever I’m frustrated by what’s going on in the news or what has happened to me based on specific microaggressions or something that I have to go through, I sort of look at art as a way to express how I’m feeling,” Sultan said. “I think through there the work evolves by itself.”

Sultan has been practicing art her entire life, describing it as the “one thing that always made sense,” and often using it as a form of therapy.

Born in Abu Dhabi, Sultan grew up in Finland, Bahrain, Saudi Arabia and Malaysia. She moved to the U.S. in 2013 to study art at Parsons School of Design. After that, she attended WSU’s MFA program, which she graduated from last semester.

Professor Hallie Meredith, one of Sultan’s professors and served on her thesis committee, said Sultan was a confident yet poised student, with strong opinions yet still open to ideas and criticism. She also mentioned that Sultan came in as a painter, but due to the MFA program being interdisciplinary, she quickly adopted other styles, like the textiles she used in “Anak Dara.”

“She has a really strong sense of identity and when she is articulating it she makes it accessible to people from radically different backgrounds,” Meredith said. “I think this is not necessarily just because she has an international background, but because of the strengths she has as an artist.”

Sultan said she has received pushback, especially from her works regarding Islamophobia, but she said that will happen whenever artists of color deal with uncomfortable issues.

“So when you make art concerning [uncomfortable] topics people tend to see it as ‘Oh, you’re being negative’ or ‘You’re being aggressive about the matter’ but more, in fact, is it’s creating an open discussion and dialogue on matters people are super ignorant towards,” Sultan said. “Once you get to that stage where people are talking about something, that’s when a dialogue is being created and through dialogue, ignorance is being defeated and people are learning what their own biases are.”

Now, Sultan is working as the artistic director for Raise Karma, an artistic residency program centered around empowering art through spirituality and helping artists of color and women. Today, she opens her first solo exhibition with Trotter&Sholer in New York City, using many of the pieces from her thesis project.

Trotter&Sholey CEO Jenna Ferrey said she was introduced to Sultan and her art through a mutual friend, who was displaying a work of Sultan’s in his own exhibit. Ferrey said she fell in love with the work and had him introduce them.

“For me, the interesting thing about Azzah’s art is it’s very candid and very honest,” Ferrey said. “She knows what she wants to say and I think she channels that into her work in a way that you sort of instantly recognize the authenticity of the pieces.”

Ferrey said Sultan’s art allows people to experience cultures and perspectives outside their own, and that she is excited to work with her.

“In the times of a pandemic, she’s thriving,” Meredith said. “And I think she’s going to continue to go from strength to strength. It’s really been a pleasure working with her and I look forward to seeing how her work will continue to develop.”