Governor meets with university administration regarding COVID-19 spread, efforts to help Pullman and other college communities 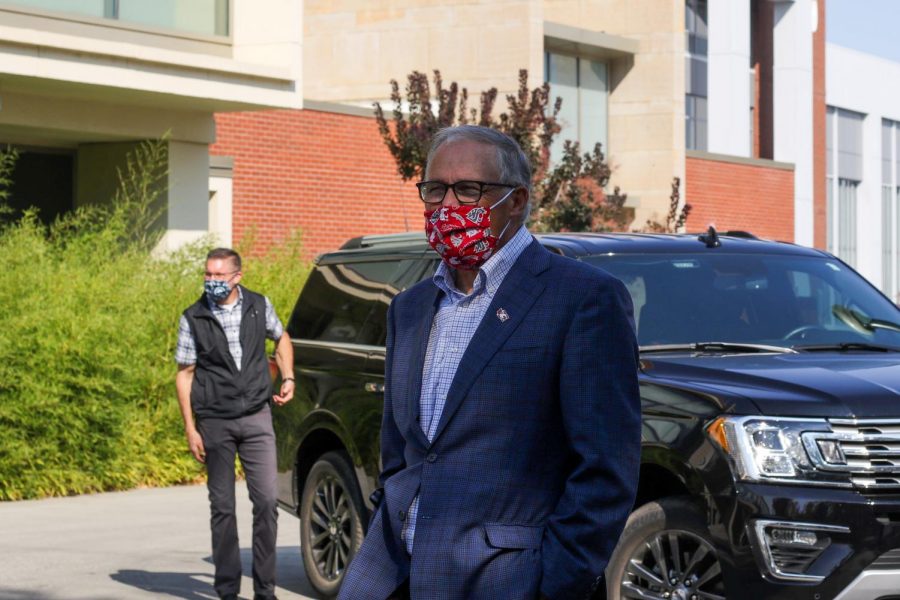 Gov. Jay Inslee walks out of the CUB following his meeting with WSU administration, including President Kirk Schulz, on Thursday.

WSU is learning lessons about how to operate during a pandemic that can be applied statewide, such as having accessible testing, Inslee said.

Students can show leadership in simple actions to prevent the spread of the virus, such as social distancing, avoiding large gatherings and wearing a mask in public spaces, Inslee said.

“You can be a leader to save people’s lives,” he said. “[These actions] can save your grandparents’ or parents’ lives — that’s a good day.”

Representatives from ASWSU, GPSA and other student organizations were present at the meeting, ASWSU President Curtis Cohen said.

“[Inslee] really wanted to get a student perspective from it,” Cohen said.

Inslee said he felt safe visiting WSU even with the increased cases because meeting attendees were social distancing, and he believes the campus has good hygiene.

University administrators want all students to get tested in the month of September, said Phil Weiler, WSU vice president for marketing and communications. Multiple locations are available so students without cars are still able to get a free test.

Pullman Police Department has had a positive experience working with individuals during the pandemic, Inslee said. The department’s goal is to get people’s attention by issuing tickets for COVID-19 violations rather than arresting people.

Officers have not faced pushback due to the nuisance party ordinance. Everyone has been compliant so far, said Pullman Police Chief Gary Jenkins.

Inslee was complimentary of the steps different institutions in Pullman are taking to combat COVID-19, he said.

WSU President Kirk Schulz, Pullman Mayor Glenn Johnson and Whitman County Public Health Director Troy Henderson, among other community leaders, were all present at the meeting, according to a press release.

JACQUI THOMASSON CONTRIBUTED TO THIS REPORT.