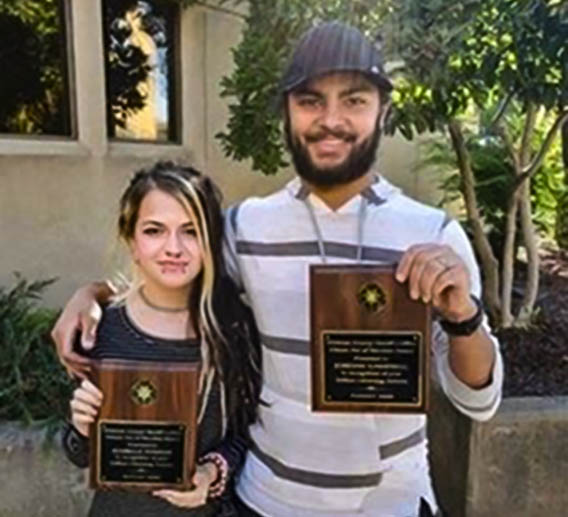 Local residents Isabelle Fowler and Jordan Campbell were awarded the Citizen Act of Bravery Award after helping a woman involved in a domestic abuse.

The Whitman County Sheriff’s Office recognized two citizens for taking action that saved a woman who was allegedly attacked by her boyfriend.

Isabelle Fowler, 19, said she and her boyfriend, Jordan Campbell, 20, witnessed a car swerving through the road while they were delivering Campbell’s paper route in an early August morning. The car eventually pulled over after making brief stops throughout the road, and the female passenger ran to Fowler and Campbell’s car.

At first, Fowler said she and Campbell were worried that the driver was drunk or was having health problems. In actuality, it was a violent dispute between the victim and her boyfriend.

“[The victim] ran to the car saying [the driver] was going to kill her and had a knife,” Fowler said.

“I was just concerned for her. I was kind of in shock,” she said. “I think I was on adrenaline, so I wasn’t scared for my life.”

Police showed up to the scene shortly after and took the victim to Pullman Regional Hospital where she has fully recovered since, according to the Moscow-Pullman Daily News. Chagollan-Flores is in police custody and is scheduled for trial Oct. 12.

Recently, Whitman County Sheriff Brett Myers awarded Fowler and Campbell with the Citizen Act of Bravery Award. Myers wanted to award the couple for their bravery because they could have just driven off, but their presence at the scene saved the woman’s life, he said. The sheriff does not hand out these awards often.

“It was clearly an act of courage,” Myers said.

Fowler was grateful to receive the award but saw their action as simply what had to be done in the situation, she said.

“It was nice to receive that recognition, but I don’t think it was necessary,” Fowler said. “I’m just glad everything went the way it did.”

Fowler also said she would do the same thing again if presented with a similar situation.