WSU student leads in, out of classroom 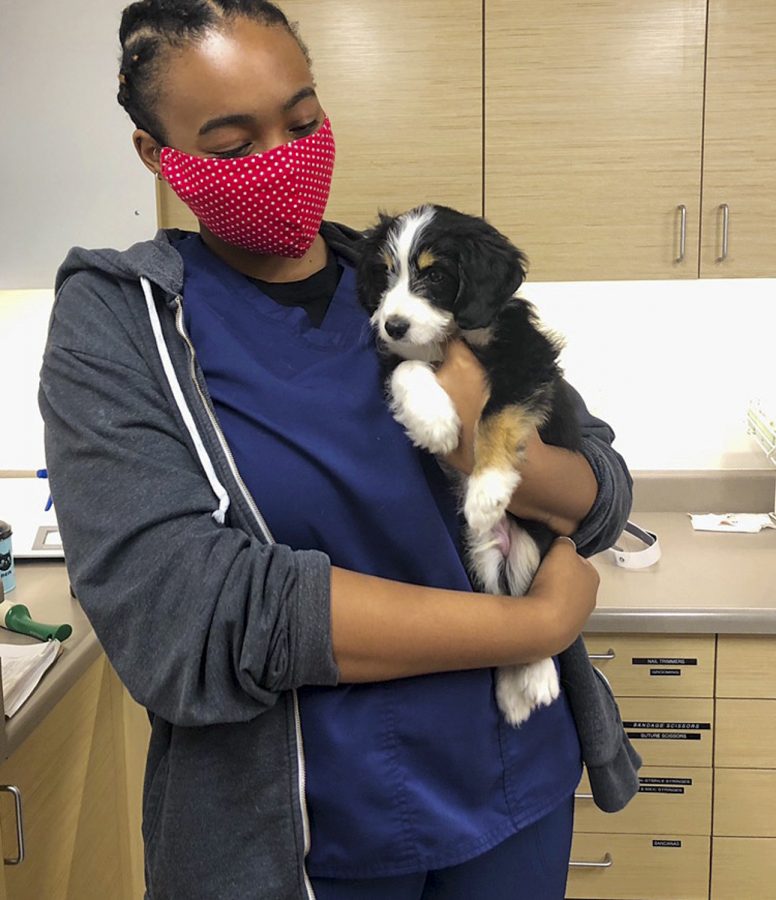 Shakirah Muhammad wrote in her second-grade journal that she wanted to be an “animal helper.” Now, more than 10 years later, she has spent her past two summers at a veterinary hospital working toward her dream.

Muhammad said she began working at Aurora Veterinary Hospital two years ago when the opportunity arose to shadow the veterinarians and gain more experience in the field.

“She has so much confidence, and she’s dedicated to her work here. Even as a full-time student, she has worked summers and even covered shifts from time to time,” Bernstein said. “She’s dedicated to learning as much as possible about the field, and it’s very admirable.”

Although new protocols make the care process longer, Muhammad is grateful for the possibility to continue to work with her colleagues and help take care of the animals.

Clients cannot wait inside with their pets. Muhammad and the other technicians meet the clients at their cars, then bring the pet inside, she said.

In addition to her full-time job, Muhammad is also a full-time student and a leader on campus. Previously, she was the treasurer of the Black Student Union. Now, she is a mentor for Multicultural Student Services.

Muhammad said mentors work with incoming freshmen who are people of color or first-generation college students. The goal of the Multicultural Student Mentoring Program is to help students become acclimated with WSU.

“My favorite part about working with the students is the connections I get to build with them,” Muhammad said. “There are usually people that feel scared or unsure of what they’re doing as freshmen, so for me, it feels good to bring a more positive experience to them.”

Arnold said her previous experience working with Muhammad and other leaders of BSU proved Muhammad’s dedication to helping others.

“We’re really honored to have her as a mentor this year because we know she’ll be efficient at everything she does,” Arnold said. “She’s a delightful young lady and a dedicated student. Even though her schedule is very demanding, she stays on top of everything that comes her way.”

Nancy Irlbeck, one of Muhammad’s professors, said she admires the passion Muhammad has for her field of work.

“She has so much tenacity, she never gives up,” Irlbeck said. “She does things early, and there’s no ‘halfway’ for her. She excels in class every day.”

“She may not have known the specific path when she was so young, but all these years later, she’s in the same field,” Manning said.

Manning said she is excited to celebrate Shakirah’s graduation this year.

“I completed my grad school at WSU, and it was really special having Shakirah attend my graduation last year,” she said. “I just kept thinking, ‘Wow, this will be her next year,’ and I can’t wait to see where she goes from here.”