‘It all happened within a matter of 10 minutes’ 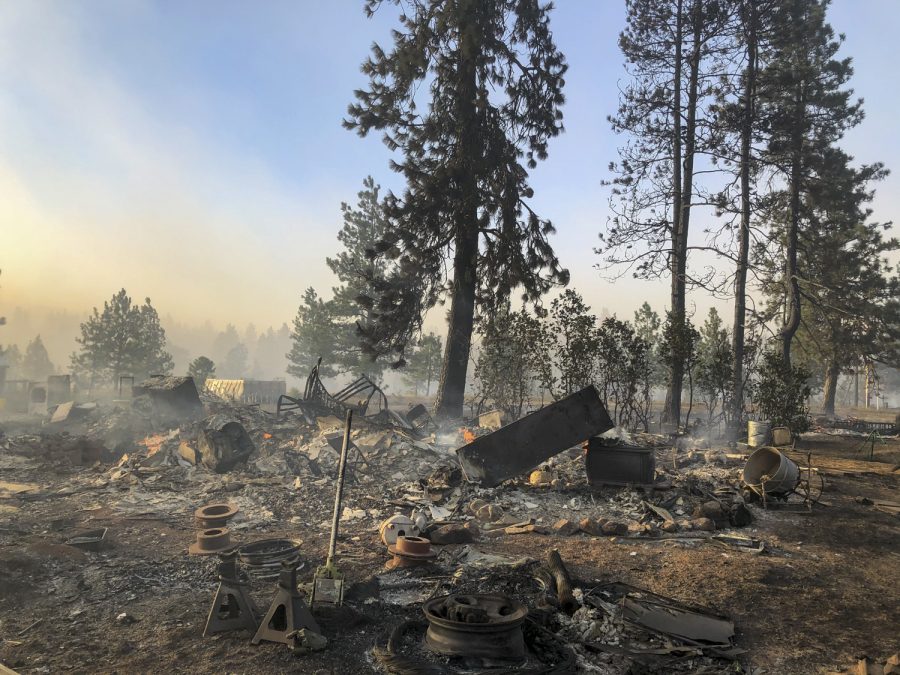 About 80 percent of the homes in Malden were lost due to a fire that started on Babb Road.

For Hannah Smith, her house in Malden was everything.

Her family not only collected antiques and thrifted items that had hundreds of years of history behind them, but sometimes sold them to make a living.

When the Malden fire on Labor Day burned the Smith family home to the ground, those antiques – opals, crystals, rocks and trinkets – were gone.

Fires and smoke are normal in the area. When Smith woke to the sound of her latched door opening and shutting around 11 a.m. that morning, she didn’t think too hard about it. She and her husband rolled over and went back to sleep.

Then her grandfather came into the room and casually mentioned they may have to evacuate. Again, Smith did not think about the danger of the smoke or fire – it was a normal occurrence this time of year.

Within 15 minutes, she noticed the smoke permeated through their house, a dusty haze settling on furniture and in each room. Smith realized it would likely catch on fire.

Without time to think, Smith gathered her animals and her 2-year-old daughter and started driving toward Rosalia. A line of cars snaked around the one highway out of Malden. Smith couldn’t see the taillights of the car in front of her.

Looking over at her daughter, Ember, she saw the toddler breathing out smoke. She said it was a surreal experience.

Smith has yet to truly process the fire that destroyed her family home, and she said she has no idea what to tell Ember about the loss.

“She keeps asking to go home, and I have to keep telling her, ‘We don’t have a home, baby,’” Smith said.

For the Place family, they went through one of the most devastating experiences of their life when their entire house burned down in the Malden fire.

The Place family started their morning like any typical Monday. At 1 p.m., they were told by a friend that there was a quick-spreading fire nearby, but they did not think much of it, Chloe Place, the eldest daughter of the family, said.

At 1:30 p.m., Chloe’s parents drove to the end of town to see how bad the fire had gotten. When they returned they quickly started telling all their neighbors that the fire was bad and they needed to evacuate, Place said.

The Place family didn’t have much time to grab anything, except for a few family albums, ashes of passed family members, and maybe an outfit or two, Place said.

“We were really more focused on other people than really ourselves at that point,” Place said. “We didn’t have time to grab really anything.”

The whole family piled into their cars and were told by officials they had to evacuate. The family drove up to Rosalia with their travel trailer and have been staying there since, Place said.

“It all happened within a matter of 10 minutes,” she said.

All of the Place family managed to get to safety and even their animals they had to leave behind managed to escape and survive the fire.

“The main thing we learned from this is don’t be sad about what you lost, but be happy for what you still have,” Place said.

A few days after the fire, Place returned to the land where her house once stood. All that was left was debris from the structure, nothing left to salvage.

“It was a really lost feeling,” she said. “It was very difficult to see the house again because there was literally nothing left.”

Smith said Malden never made the news before the fire. She said having Gov. Jay Inslee visit, and seeing coverage of the fire in major news outlets, such as The New York Times and Seattle Times, only added to the surreality of the attention for a town of 200 people.

“We don’t even get mentioned on the weather list, so it’s like, wow, they care about us,” Smith said.

The residents now look to rebuild. Donations from United Way and other entities across the country have helped, but Smith must cope with the loss of collectibles that took years, generations, to acquire. Inslee came to Malden to address the fire, but Smith said the visit did little to comfort the affected residents.

Smith said the entire event still feels like a dream. A town like Malden never seemed to have drama, and “there’s never any bad stuff going on,” she said.

“It was really weird, because, I don’t know, they’ve never seen anything like this before,” Smith said. “The whole town is gone, it’s really weird.