Former WSU running back Rueben Mayes, came back to Pullman after NFL career 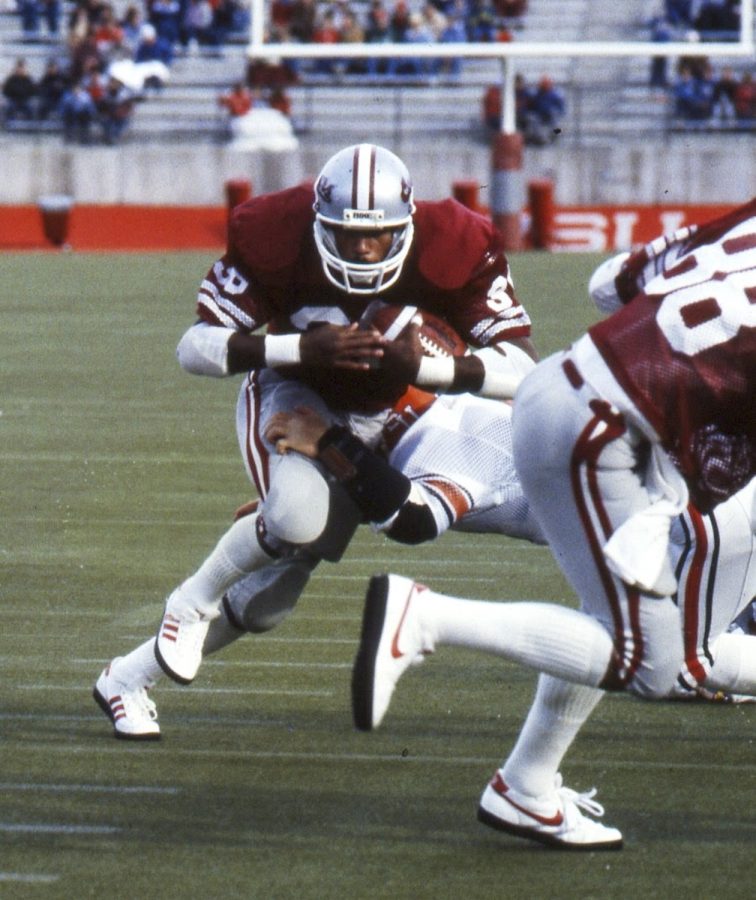 Mayes compiled over 4,200 yards from scrimmage and 26 total touchdowns during his four-year career at WSU.

Rueben Mayes, Washington State Athletics Hall of Famer, is arguably one of the greatest football players to ever come through WSU. His love and support for the Pullman community did not stop when his time on the field came to end.

Mayes is the Chief Development Officer for the Pullman Regional Hospital Foundation as well as a member of the administrative team. In his eighth year at PRH, his main responsibility is overseeing a team that obtains donors and fundraising for the hospital.

Mayes is a well-respected community member, as he’s involved in organizations such as Lions Club and helps out with local programs such as Meals on Wheels.

“He’s a community member through and through,” said Alison Weigley, assistant director of development at the PRH Foundation. “He really embodies what it is to be a generous person and to give back.”

The Canadian-born running back had four sensational years at WSU, as he earned himself a spot in the WSU Hall of Fame and earned the Pac-10 Offensive Player of the Year award in both 1984 and 1985.

In his four seasons, he scored 26 total touchdowns and ran for over 4,200 yards from scrimmage. His 1984 season included him rushing for over 1,600 yards and finishing 10th in Heisman voting.

His favorite memory as a Coug came in the 1984 season when he rushed for 537 yards and five touchdowns in back-to-back games against Stanford and Oregon. Mayes set multiple WSU, Pac-10 and NCAA records during this two-game tear.

“One of the best parts was coming back after the two games and all the students were so excited,” Mayes said. “That was quite the experience for me and one I remember quite vividly.”

He was awarded the Harry Jerome Award in 1985, which is given to African Canadian leaders for their contribution in athletics, community service, academics and creative arts, according to WSU Athletics.

Mayes came out of college as one of the best running backs in the country. He was told that he had a chance to be drafted late in the first round but didn’t really know for sure.

“There was a lot of ambiguity, I just didn’t know where I was going to end up,” Mayes said.

Mayes waited for his phone call as he watched two rounds go by but was finally drafted by the New Orleans Saints in the third round of the 1986 NFL Draft as the 57th overall pick.

Mayes didn’t miss a beat, as he won Offensive Rookie of the Year and made the Pro Bowl twice in his first two seasons in the NFL. He rushed for 1,353 yards in his rookie season and followed it with 917 yards in the 1987 season, which was shortened due to a player strike in weeks four through six.

Mayes missed the entire 1989 season after injuring his Achilles tendon, and unfortunately was never the same after having multiple surgeries. Mayes mentioned that he mostly relied on advice from his wife, Marie Mayes, while going through these difficult times.

“My advice to Rueben during his playing career was encouragement to persevere through injuries and challenges,” Marie said.

Marie is currently the Director of the Center of Entrepreneurial Studies at WSU. She manages a team that provides various services to students in order to help their ideas come to life. She also works as a clinical associate professor in the Carson College, teaching two entrepreneurial-based classes and promotes the entrepreneurship minor.

Following his injury in 1989, Mayes returned to the Saints to play the 1990 season, but retired in 1991. Mayes said at that point in his career he was just tired.

After a season off, Mayes wanted to come back and give it another go. He was traded to the Seattle Seahawks in 1992 and played two seasons before retiring for good.

After the NFL, Mayes returned to WSU and obtained his master’s degree in business administration in 2000.

Mayes is forever grateful for his time in the NFL, and said that getting to know legends like Ronnie Lott, Lawrence Taylor, Jerry Rice and Mike Singletary was an unforgettable experience.

“They’re the best of best,” Mayes said. “I consider it a privilege to get to meet these people and get to know them a little bit.”

Mayes credits a lot of his success to great mentors he’s met throughout his playing career, but most notably his North Battleford Comprehensive High School coach Don Hodgins. Mayes credits Hodgins for getting him a scholarship at WSU and allowing him to advance his football career.

Mayes has been inscribed in the WSU, College Football and New Orleans Saints Hall of Fames in 1993, 2008 and 2004, respectively.

In 2012, a practice field in Mayes’ hometown of North Battleford, Saskatchewan, Canada was renamed Rueben Mayes Field in honor of his three tremendous years with the NBCHS Vikings.

Mayes and his wife Marie, who met at WSU and got married while he was in the NFL, have two sons together, Logan and Kellen.

“He’s one of the hardest workers I’ve ever met,” Weigley said. “It’s really inspiring to work with somebody who has such positive energy.”