WSU students’ attempt to return to normal is ‘fueling the epidemic’ 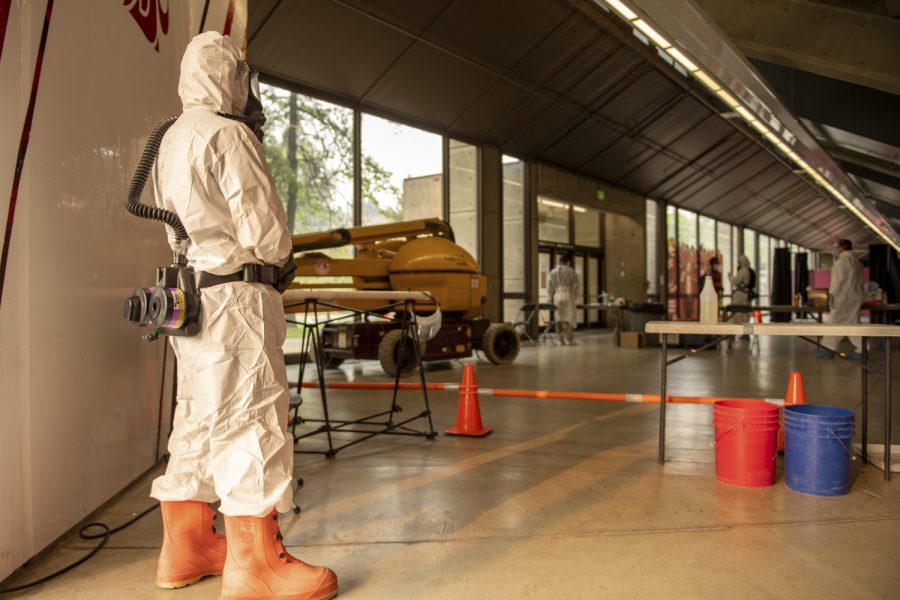 WSU’S COVID-19 testing sites moved to the entrance of Beasley Coliseum due to wildfire smoke on campus Tuesday. The testing at Beasley is being conducted by the National Guard and is free for all WSU students. Testing is available on site 12-6 p.m. through Friday.

Despite local restrictions on social gatherings and WSU’s switch to distance learning, Pullman currently has the second greatest daily COVID-19 case average by population in the U.S.

In the last 26 days, 924 cases were confirmed within Whitman County. Before that, there were 142 confirmed positive cases over an approximately five-month period, according to the Whitman County Health Department website. Nearly all recent cases have been identified as college-aged individuals.

“More students chose to move back into their apartments and houses in and around Pullman than we had hoped,” said Phil Weiler, WSU Vice President for Marketing and Communications. “Unfortunately, when that happened, they brought the COVID-19 virus with them.”

Many students returned to Pullman because they already had leases. WSU tried to work with local landlords so students would not be compelled to return, he said, but there was not a lot of flexibility.

“Had we been able to peer into a crystal ball and know what fall was going to look like, we might have been able to make a decision early enough before students signed their leases,” Weiler said.

Moving classes online and increasing testing capacity on campus were WSU’s most important steps for preventing an outbreak, he said. However, the university cannot control whether students return to campus and follow restrictions.

Eric Lofgren, assistant professor in the WSU Paul G. Allen School for Global Animal Health, uses computer models to study the spread of diseases, including COVID-19. There is no model to predict what happens if people return to a community and do not properly social distance, he said.

While closing campus and testing students are both important, individuals need to change their behavior in order to control the outbreak, he said.

“The desire to get back to as close to a normal campus life as possible is actually extending our inability to get back to that by fueling the epidemic,” Lofgren said.

COVID-19 has the potential to spread through the community rapidly, he said. This is a concern because the problem will not be solved if everyone, or a large portion of the population, gets infected.

Herd immunity occurs when a significant percentage of the population has immunity to an illness, either through vaccination or natural immunity from being infected, he said.

“If we reach [herd immunity] naturally, we have failed,” Lofgren said. “That’s a little bit like asking … when will a forest fire be done because it has simply combusted everything it can combust?”

With COVID-19, herd immunity is estimated to be around 60 percent, he said. However, this number could be different in a college-aged population.

“That herd immunity number is what it takes to have an infection introduced and have it not become an epidemic,” Lofgren said. “If you have an epidemic that’s already headed to herd immunity, it’s going to overshoot that threshold … you don’t hit 60 percent and now we’re done with COVID.”

COVID-19 is likely something WSU will face until there is a widely available vaccine, he said.

If the outbreak spreads beyond WSU and the Pullman area, Whitman County could move back to previous phases of reopening in order to break the chain of transmission, said Troy Henderson, director of Whitman County Public Health.

As of Tuesday, 1,246 students had been tested at on-campus sites, Weiler said. Administrators want every student in Pullman to be tested during September.

Test sites were closed Friday afternoon and Saturday due to air quality concerns, he said.

Pullman’s healthcare facilities, including Pullman Regional Hospital and Palouse Medical, have not been overwhelmed by COVID-19 hospitalizations, Weiler said. However, they were overwhelmed by students seeking tests before WSU increased its testing capacity.

Weiler said there is currently a 16 percent positivity rate for tests at WSU, meaning 16 percent of individuals tested receive a positive COVID-19 result.

As testing increases and the virus becomes less prevalent in the community, the positivity rate will decrease. Henderson said the ideal positivity rate is below five percent.

Weiler said the National Guard will likely stay in Pullman until the positivity rate has dropped below five percent.

The University of Idaho confirmed a total of 99 positive cases after testing 8,500 students on campus, which is a positivity rate around one percent, according to U of I’s COVID-19 website. U of I is offering in-person instruction this fall.

The Pullman Police Department is issuing fines to students and community members who violate restrictions on social gatherings. The department initially tried to educate the public about regulations, but is now focusing on enforcement, said Pullman Police Cmdr. Jake Opgenorth.

Officers have issued 22 citations for parties over the last three weekends, he said. All but two were in the College Hill area.

Opgenorth said officers will now fine partygoers and not just party hosts. Party hosts were collecting donations to pay their fines, so this tactic was not working.

The spike of cases in Pullman prevented Pullman Public Schools from reopening for in-person classes this fall, Opgenorth said.

Individuals need to be considerate and realize how their actions can affect others, he said.

Stephanie Sikavitsas Johnson, contract tracer and graduate student in the Paul G. Allen School for Global Animal Health, said it is important for students to respond to contact tracers and answer questions honestly if they are contacted.

“[Contact tracers] are not going to get anybody in trouble if you tell us you were at a party,” Sikavitsas Johnson said.

Pullman residents are upset students have returned despite there being no in-person classes, Weiler said.

Flu shots are particularly important this year because COVID-19 and influenza have similar symptoms, Henderson said. It is also possible to be sick with COVID-19 and the flu at the same time.

Lofgren said it is unknown if COVID-19 will change with the seasons, but it is possible the outbreak could become much worse in the winter.

“It would be incredibly detrimental and challenging to be dealing with a COVID-19 outbreak and a seasonal flu outbreak at the same time,” Henderson said. “It adds a layer of complexity.”