‘Three back and two over’ 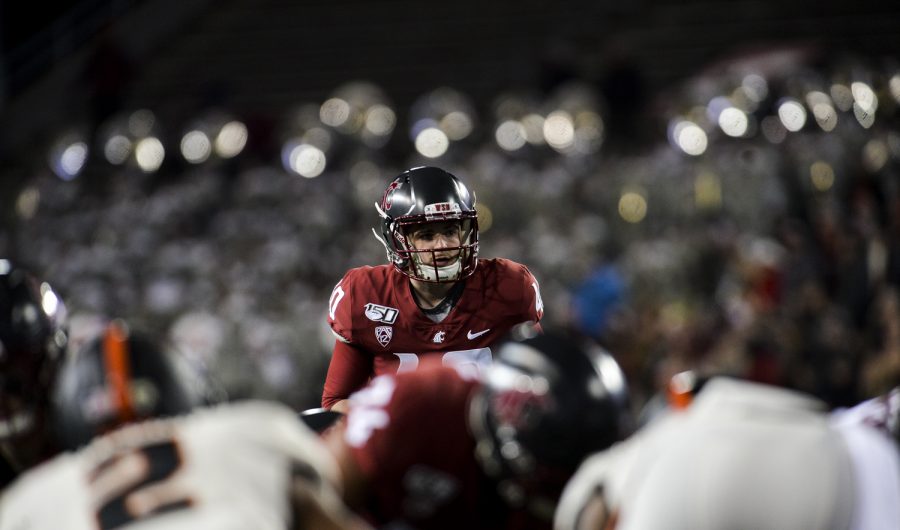 WSU kicker Blake Mazza has made 30 of 36 field goals and 115 of 120 extra points throughout his two-career at WSU.

WSU redshirt junior kicker Blake Mazza has been kicking footballs since he was in elementary school, but not always on a football field.

“I remember the first time I took him out to an empty field and we used to kick over trees. There weren’t even uprights on this field,” Blake’s dad, Matt Mazza, said.

Blake has come a long way from the trees in the empty field in North Texas. He has been kicking through the uprights at Martin Stadium for two years, making 30 of his 36 field goals and 115 of his 120 extra points.

Kicking runs in the family for Blake. His dad and grandfather were both kickers, and they encouraged Blake to give it a try.

“Those two men, my grandfather and my dad, were people who I wanted to please and I looked up to them as my role models,” Blake said. “[I] just wanted to be just like them.”

Blake’s grandfather was especially influential to him growing up. He said he remembers reading old black and white newspaper articles from when his grandfather kicked in high school in New Jersey. One read, ‘Mazza kicks game-winner.”

“When he said he thought he could be something special, I think Blake grabbed a hold of that,” Matt said.

Matt knew his son was going to be a special kicker when he was in middle school. He did not let Blake play football until sixth grade, but when he was on the field, he looked better than the other kids attempting to kick the ball.

Blake’s kicking coach, Scott Blanton, also saw something special in him. He said he met Blake when he was a freshman in high school.

“He was on the tiny side, but he had really good pop on his leg and he really stood out,” Blanton said.

Blake grew into his leg and got stronger as he grew older. Blanton said he knew he could be a division one kicker in his junior year of high school. He said it was the mental aspect of the game that set Blake apart.

“He’s got the fortitude and the work ethic to go as far as he wants,” Blanton said.

Blake had a very successful high school career. He made 17 of his 23 career field goal attempts and was an all-district first-teamer as a kicker and punter. He was graded as a five-star prospect and the 12th best kicker in the country by Chris Sailer Kicking in 2017.

That success earned Blake a scholarship to the University of Arkansas, where he was the backup kicker his freshman year.

He planned on redshirting that year, but the starting kicker was benched at halftime of the second game of the season, making Blake the starter.

“We never got in the red zone or anything, so I never kicked,” he said. “So, I saved my eligibility from not kicking in that.”

Blake said he lost the starting job during a kicking competition against the player handling the team’s kickoffs the following week, so he redshirted. The Arkansas coaching staff was fired at the end of the season, so Blake decided to transfer.

Blanton said Blake’s experience at Arkansas was a testament to his strength and confidence in himself. He said most players would not react the way he did, wanting to find the next opportunity right away.

“When he got knocked back down, you couldn’t even tell he got knocked down,” Blanton said. “He just kept rocking and rolling because he has his goals, and he’s moving forward.”

Blake said he got in contact with the coaching staff at WSU who told him their senior kicker was leaving. Blake said he knew he would be able to compete for the starting job, so he committed to the Cougars before even visiting.

Blake found himself in Pullman, Washington, which is almost 2,000 miles away from home. Blake said his high school football stadium held over 20,000 fans; Martin Stadium holds over 32,000 fans.

Blake won the starting kicking job as a true freshman and had an immediate impact on the field. He went two for two in his first game and even hit a 50-yard field goal at USC in his fourth game.

“For me, that wasn’t anything big because I knew the talent I had and I was confident in myself but I was like ‘In order to gain the respect of people on my team and in the locker room, I’m going to have to perform,’” he said.

His biggest performance would come over a month later. The Cougars were ranked No. 14 in the country when they went to Stanford to play the 24th-ranked Cardinal.

The game was tied at 38 points apiece with 23 seconds left in the game when Blake took the field. He put the ball through the uprights, giving WSU a three-point lead and, later, the win.

Matt said he and his wife Kristen were at that game, but she was too nervous to watch Blake’s kick.

“She didn’t actually see the kick,” he said. “She saw it the first time on ESPN after the game was over.”

Matt said being the parents of the kicker is nerve-racking. He said they have learned to deal with the stress. Knowing that Blake is handling the nerves much better puts them at ease.

Blake said he likes the pressure and big moments, and he thrives off the crowd noise during away games.

Blanton said he recognizes Blake’s confidence. He said Blake is not cocky but he has swagger, and when he lines up for a field goal, he knows he is not going to miss.

“He’s very confident when he goes three back and two over,” Blanton said.

That confidence is one of the reasons Blake was a top kicker in the nation in 2019. He was named a finalist for the Lou Groza Award, given to the nation’s top kicker each year.

WSU played Oregon State in the game before Blake found out he was a finalist for the award, where he missed his first field goal of the season.

He said the next day he was called in to head coach Mike Leach’s office by the special teams coach and found out he was named a finalist for the award.

Matt said he remembered when Blake called him after getting the news and that it was such a relief for him.

“He FaceTimed me and he said, ‘Dad can you talk for a second?’ and I said yes,” Matt said. “There were tears running down his face, and I thought something had happened. I didn’t know if something bad had happened, and he said, ‘I’ve been named a finalist.’”

Blake went to Atlanta, Georgia, for the award show, which was held at the College Football Hall of Fame. Although he did not win the award, he said it was a humbling experience.

Matt said when they were walking out of the award ceremony, Blake looked at him and said he has work to do and he is going to win the award next year.

“Your mind flashes back to that fifth-grader trying to kick a football over a tree in a field and you kind of see how far he’s come,” Matt said. “It was pretty overwhelming, the entire experience.”