Controlled burns, better wildfire policies are crucial for the safety of Washington’s millions of residents 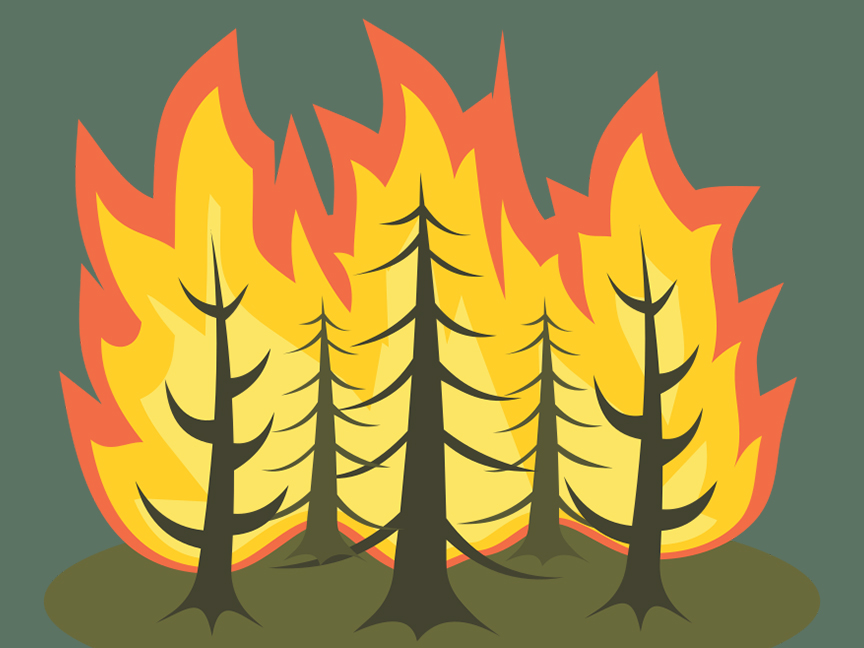 The west coast wildfires are indicative of a poorly constructed environmental policy, which we need to fix.

The recent intense, historically large wildfires that have swept large areas of the Pacific Northwest have brought calls from natural resources experts to reassess how we manage fire and forest landscapes.

Our decision to constantly “restrain” naturally occurring fires has had consequences that we are seeing now on the news and in our communities.

Some may consider these hard decisions regarding active management and use of fire in forest landscapes to be a “rude awakening” for modern civilization. We have been taught that though fire serves many purposes, wildfires are a destructive nuisance. This is where some context and scientific understanding will help us comprehend the productive “next steps” in dealing with wildfires.

Significant events in history led to a more suppressive approach towards fire in the forest landscape, according to three experts in different areas of the field of forest management.

Mark Swanson, associate professor in WSU’s School of the Environment, said that along with rising average temperatures, the fuel beds for potential fires have continued to grow and feed these fires, thus increasing the size, severity, heat output and the length of time these fires burn.

“The fact that we have suppressed fire for over a hundred years throughout most of the western United States has allowed fuels to accumulate in many of our dry forests,” he said. “They’re going to burn at higher severity because of these accumulated fuels that would not have accumulated under the historic disturbance regime of more low-severity frequent fires.”

This highlights the importance of a more ancient approach that involves the Native American custom of strategic burning of forests and other ecosystems, which supports the constant, natural evolution of forest ecosystems, Swanson said.

Landscapes managed in this manner happened to have a patchy structure that decreased fire spread and severity. All this is to say that there is more than a single driving factor of these surging “megafires,” and climate change is not the only one.

Wildfires can be ramifications of our negative perspective towards fire, including the deliberate use of fire as a land management tool.

Paul Hessburg, a research landscape ecologist, questions in a TED Talk the societal approach toward wildfires to demonstrate how our actions allow for modern wildfires to grow in magnitude on a year-to-year basis.

In his speech, he refers to a more up-to-date image of Thorp Mountain, near Easton, Washington, where the forest is dense, a perceivably unproblematic image. Hessburg then flips to an image of the mountain in the 1930s where it appeared relatively patchy.

It may seem like there is no issue with a denser forest because that means more oxygen, no sign of deforestation and perhaps an overall more beautiful landscape to most observers.

However, comparing the “patchier” forested area from the ’30s shows how the patchwork, or landscape mosaic, as it’s also called, served a purpose. There was more variability among areas of open and closed canopies that would harvest a diversity of habitats and fuel loads within the ecosystem while limiting extreme fire behavior in that system.

Hessburg said in the TED Talk that the open patch mosaic would indicate the presence of fires that were presumed to be relatively short-lived and small in the extent to today’s standards. Because of these meadows and the overall topography of forested areas, the fires that occurred were low in severity. These factors would work together to create what he called a natural mechanism meant to “resist the spread of future fires.”

Matthew Carroll, professor and resource sociologist in WSU’s School of the Environment, said the fire exclusion policy was adopted following the “Big Burn” of 1910, which stretched across northern Idaho, eastern Washington and western Montana.

Occurring during the formative early days of the U.S. Forest Service, it burned approximately three million acres and claimed 87 lives.

Following the catastrophic event, the U.S. Forest Service, with the support of Congress and the presidential administration, adopted the fire exclusion policy that would opt for fires being extinguished immediately using fire suppression techniques taught by European-trained foresters.

Carroll said during that time, not many foresters would question whether the fire was part of the system, and should, perhaps, not be completely excluded.

Fire suppression, with notable exceptions, seemed to work for several decades.  However, during the 1970s, the acreage subjected to wildfires began to increase, leading to what we know today as the era of megafires.

Now to put this information into context: climate change and fire suppression are two major drivers of the massive fires we have experienced recently. But there is still another major factor to be considered. For years, this country has been expanding in population, giving people the liberty to move towards employment opportunities, seclusion in rural areas or toward the amenities of metropolitan areas.

Carroll said the part of the expansion that may influence the occurrence and impact of fires is the possibility of ignorance of the type of environment to which one moves or the lack of desire to prevent fire damage to their property in the name of individuality.

For example, homeowners migrating from an urban area to a drier, rural area that has a consistent wildfire season need to be familiar with the local flora. Cheatgrass – a flammable invasive grass species – dry and dead plant material and a hot summer could be some of your worst enemies.

As a property owner, you have the choice to either adhere to land management guidelines or face a rather expensive fine. By not acting to prevent the rapid spread of wildfire on one’s own property, they are modeling what is currently occurring with wildfires. Dry, dead trees and plant material exist to fuel these megafires in small settings like somebody’s yard, or in a much larger setting like that of a forest.

Swanson said immediate actions that can be taken begins with the role of land management. These include training land managers to use prescribed fires when weather permits, the establishment of defensible space such as fuel breaks, and mechanical thinning of currently dense forests.

There are contributions we can make to restore the relationship between wildfires and forests.  We can be equipped with knowledge of fire safety and knowledge about the environment we are living in. We can also adhere to land management guidelines and recommendations, and understand just how vulnerable our western landscapes are to fire.

Carroll said in terms of policy, there is much to do in the long-term with the purpose of restoring fire to its historical backcountry. We would not be able to accomplish this until we make human communities in the wildland-urban interface more resilient through means of fuel management in and around human infrastructure.

Swanson said we cannot avoid fire, as recent events have shown because the landscape will burn at some point. An ultimate solution is to give that fire a landscape that causes less severity and destruction.