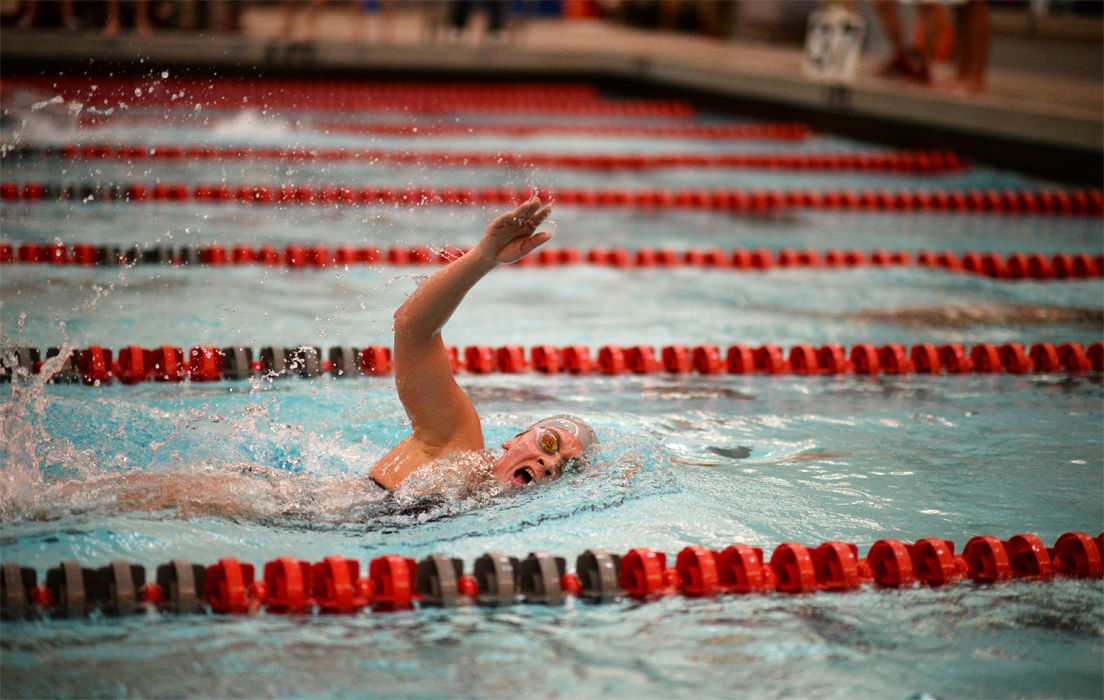 A WSU swimmer races during a meet against the University of Nebraska at Gibb Pool on Jan. 29.

Endings are never easy, but they feel better when they’re victorious ones. They’re also better when after you’re gone, your name remains.

Over the chants of “We are WAZZU” and “Let’s go Cougs” the WSU swimming team claimed a win over the University of Nebraska this weekend with a 266-106 final score.

It was also the last time the seniors on the team competed in Gibb Pool.

The team dominated day one of competition, finishing the day at 108-40. Last year, when the Cougars competed against the Cornhuskers, they finished day one at a complete tie. Among the wins on Friday was one by senior Presley Wetterstrom in the 200-meter breaststroke, the same race that put her name on the Team Records board overlooking the pool.

The seniors also celebrated their Senior Day and were walked out by parents or friends as their favorite memories over the years were announced. The walls behind the swimmers were decorated with posters covered in photos of the four seniors.

Senior Michelle Berry claimed a fourth place finish in the 200 butterfly with a final time of 2:11.39.

The Cougars ended the day with another win in the 400 freestyle relay, which included juniors Addisynn Bursch and Haley Rose Love.

The Cougars didn’t let up on day two.

The day opened with a WSU win in the 200 medley relay with senior Frederikke Hall on the winning team among Love and Bursch.

“We had each other’s back,” Hall said, “When one person swims fast it affects the whole team.”

The winning streak continued as WSU took the next six events. The 100-meter breaststroke brought an exciting battle among teammates as Hall and Wetterstrom battled for the lead.

“They love racing each other,” said Head Coach Tom Jager.

Hall ended up touching the wall first only .16 seconds ahead of Wetterstrom.

“It was a really close meet last year and after that first day coming out so far ahead it just gave us that drive the second day to have more intensity.” Olson said.

The crowds cheering was loud enough to leave ringing in ones ears as sophomore Anna Brolin combated Nebraska sophomore Erin Oeltjen ultimately claiming the win only .36 seconds over Oeltjen.

“This meet pumped us up so we are ready to do that in Utah and carry that into Pac’s.” Berry said referring to the upcoming Pac 12 championships.

Once again the Cougars finished the day with a win, this time in the 200 freestyle relay.

The swimmers were all smiles and laughs as they celebrated their win and the end of the seniors’ time competing at Gibb.

The Cougars will compete in two weeks at Salt Lake City, Utah, at 10 a.m.