‘If you keep your head up, anything can happen’ 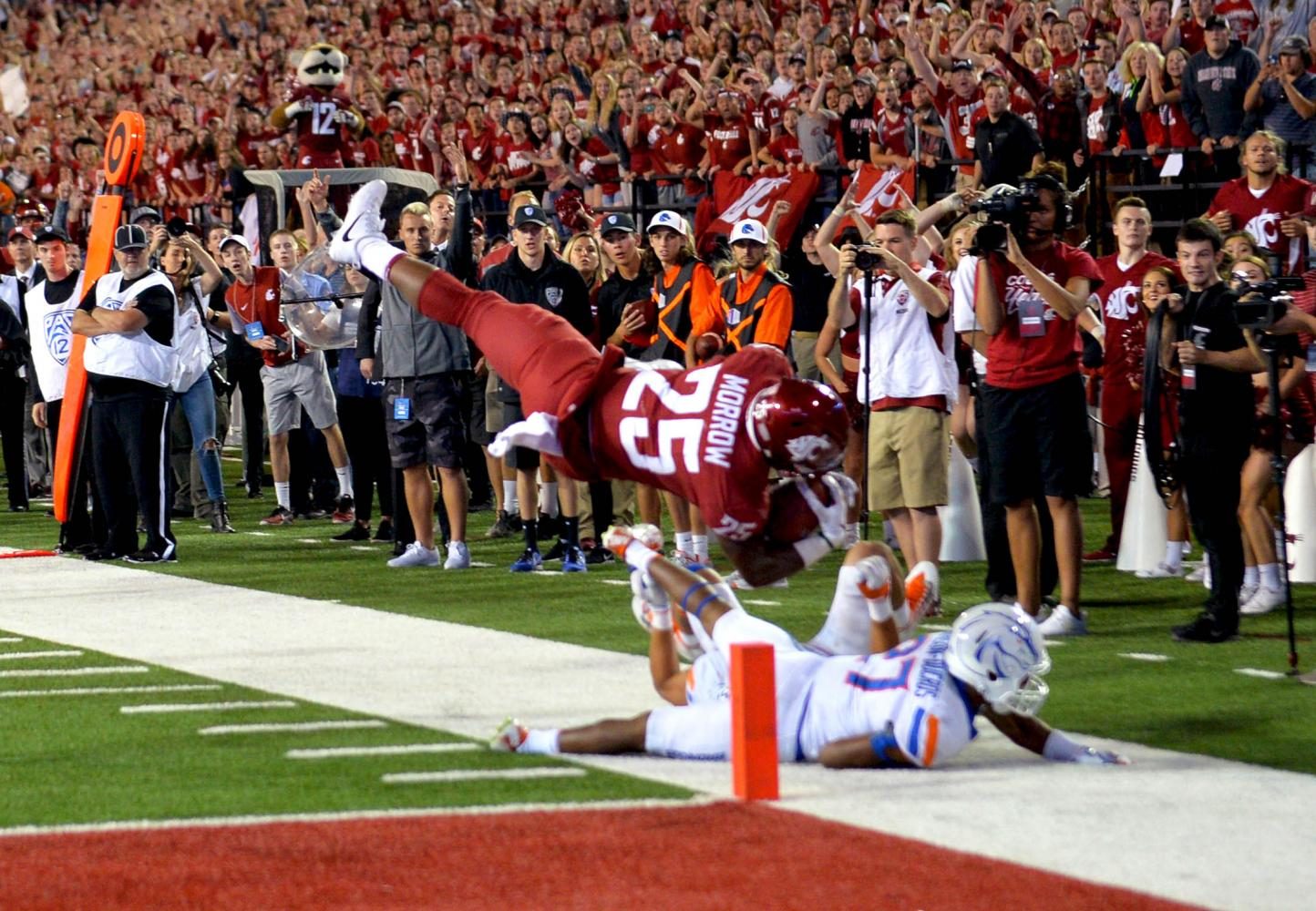 Redshirt senior Jamal Morrow scores his second recieving touchdown of the game to secure a 47-44 win in triple overtime vs Boise State.

The WSU football team trailed by 21 points early in the fourth quarter against Boise State on Sept. 9, 2017, but then-freshman wide receiver Jamire Calvin knew the Cougars were destined for a legendary comeback.

“We were down 21 and Jamire looks at me and says we’re going to win this game,” former WSU running back Jamal Morrow said. “I’ll never forget that moment.”

Calvin said he preaches the importance of confidence. He never lets his emotions sway his performance or alter his focus.

“My mentality walking into every game has been ‘If there’s time left, we can always make something happen,’” Calvin said.

The Cougars never counted themselves out that night, and the reward was one of the greatest moments in the football program’s history. Anytime that team went down, they always had faith they would come back, former WSU linebacker Peyton Pelluer said.

“We always knew when to get into gear and do what we do best,” Pelluer said. “The only time you’re going to win a game is in the fourth quarter.”

The Cougs’ mentality came down to being resilient and understanding that there are no guarantees in sports.

“It’s the next play mentality — always giving 100 percent no matter what,” Morrow said. “If you keep your head up, anything can happen.”

Calvin, Pelluer and Morrow were all responsible for a touchdown in that fourth-quarter comeback.

Calvin ignited the resurgence with a 17-yard touchdown catch from late, redshirt-sophomore quarterback Tyler Hilinski. The touchdown put the Cougars within two scores with eight minutes left in the contest. It was Calvin’s first collegiate touchdown in the second game of his WSU career.

Just two minutes later, Pelluer made a game-changing play on the defensive side of the ball. Redshirt-sophomore defensive lineman Nnamdi Oguayo put pressure on the Boise State quarterback, forcing a rushed throw and Pelluer capitalized.

A 36-yard pick-six by Pelluer with six minutes left had Martin Stadium going crazy and revived all hope for Coug fans that the comeback could actually happen.

“Housing that pick-six was one of the coolest moments of my life so far,” Pelluer said. “I’ll never forget celebrating with my boys after that play.”

A punt by redshirt-senior Erik Powell was fumbled by the Broncos punt returner Reid Harrison-Ducros. Redshirt-freshman linebacker Dillon Sherman recovered the fumble with 2:51 left on the game clock.

Morrow caught a six-yard touchdown pass from Hilinski with 1:44 left in the fourth quarter. The game was all knotted up at 31 as students who left the game early attempted to make their way back into Martin Stadium.

The game went into overtime after the defense was able to stop the Broncos on their last push to end the game in regulation.

The contest managed to make its way into a third overtime where the Cougar defense was able to hold the Broncos offense to just a field goal, giving the WSU offense the opportunity to complete the comeback with a touchdown.

On the second play of the third overtime, Hilinski dropped back and hit Morrow out of the backfield. Morrow made the cornerback miss and the rest was history. He dove into the end zone over two Boise State defenders and the comeback was complete.

Morrow said the opportunity to be put into that position was something he had dreamt of since he was a kid.

“Being a part of a legendary comeback and scoring the game-winning touchdown was surreal,” Murrow said. “I couldn’t believe it.”

After Morrow’s touchdown, the celebration began. Fans at the game jumped the fence and ran onto the field to celebrate the victory with the athletes and their community.

Morrow cherished this triumphant moment in the corner of the stadium and watched fans run out onto the field.

“It’s an amazing feeling getting to celebrate with the fans, people you know and pretty much your entire community,” Morrow said.

Pelluer felt the moment when the whole field was covered in fans was when the school was most unified.

“It doesn’t get more unifying or Cougar-esque than the fans storming the field,” Pelluer said.

Calvin compared a stormed Martin Stadium to something people would see in a movie. Something so special that it almost doesn’t feel real in the moment.

Pelluer finished the game with 14 tackles, an interception and a touchdown. He was named Pac-12 Defensive Player of the Week for his performance.

Morrow caught two touchdowns in this game, and Hilinski rose to the occasion to throw for 240 yards and three scores.

The chances were slim that night, but the resiliency from this Cougar team showcased that anything is possible if people keep their heads up and remain confident.

In loving memory of Tyler Hilinski, people can donate to the Hilinski’s Hope Foundation at https://www.hilinskishope.org/donate.