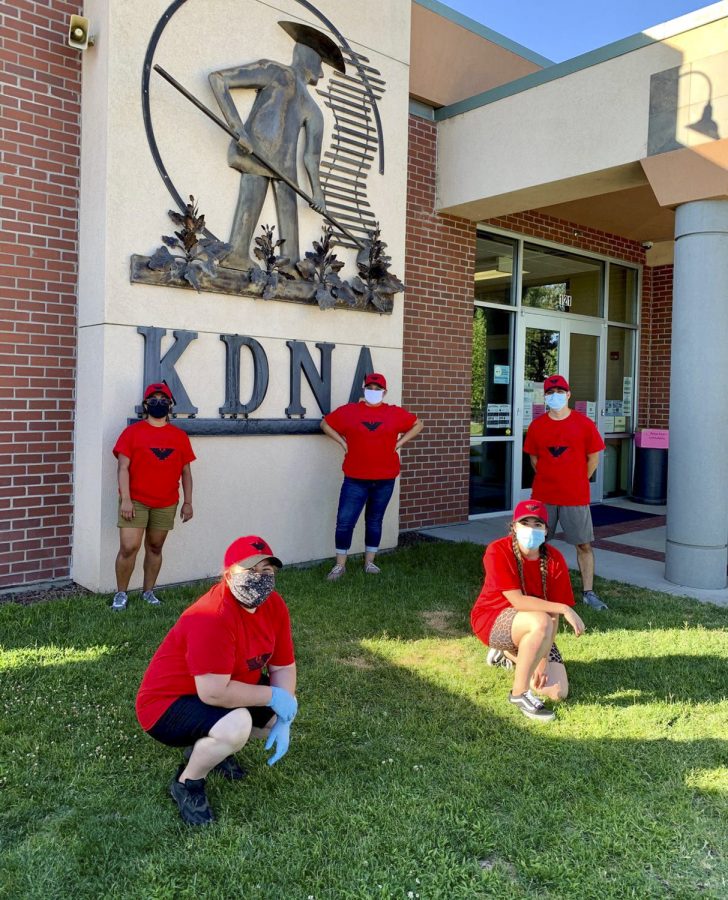 Members of the United Farm Workers Foundation stand in front of a building at a mask distribution event. The UFW Foundation has been highly involved in activism for farm workers’ rights.

The Multicultural Student Center and Chicanx/Latinx Student Center highlighted the victories of farmworkers who battled for equity in the workforce during Wednesday’s virtual presentation by WSU alumnus Jerry Martinez.

Washington grows several popular crops, occupying a spot as the top grower of apples, cherries, red raspberries and pears amongst many others, Martinez said. Over 15 million acres span 39,000 farms in the state.

“Roughly 25 percent of Washington land is farmland,” he said.

This farmland employs about 150,000 workers, Martinez said, a growing number of whom are H-2A workers, meaning they sign a temporary working contract with the U.S. government.

“This is a growing population of workers in our state, and they come with their own set of struggles,” Martinez said.

The majority of those farmworkers in Washington identify as Latinx, Martinez said. In the 20th century, with the demand for farm labor came a separate legal battle to gain rights as valuable employees.

Martin’s efforts against the vineyard, which did not provide sustainable living wages or allow its workers to unionize, caused a state-wide boycott from both workers and their allies, Martinez said.

“If you’re a winery serving CSM wine, protestors would come and disrupt and make a scene, and let people know, we support the workers at CSM,” he said.

Although news media, companies and lawmakers would portray these activists as “troublemakers,” Martinez said, the movement worked. It became a milestone for securing benefits.

The first union contract for Washington farmworkers was finalized on Dec. 5, 1995, he said.

Ana, a woman working with Mensonides Dairy, was fired after taking a sick day despite her manager telling her she would not be allowed to do so, Martinez said.

“This is how hard management pressed the workers to work,” he said.

She went to a local law firm to pursue legal action, and then connected with her colleagues on how best to organize, Martinez said.

The protests worked — the push for a government analysis found that Mensonides Dairy owed more than $1 million to its workers to make up for lack of lunch breaks and other unpaid labor, he said.

The fight for change did not end there, however, as Mensonides filed for bankruptcy and delayed the owed payments to its employees by at least a year, Martinez said. Ana continued her activism until workers were compensated for their time.

Martin’s fight also continued even after he won his battle with CSM, Martinez said.

While working at a different farm in Washington, Martin noticed that the use of pesticides was causing his dizziness and physical exhaustion.

He learned that a protective enzyme in his system had been depleted, and the cause was attributed to pesticide chemicals. Once again, Martin rallied with his coworkers and fought the system, Martinez said.

“This is something they really strongly got behind and advocated for,” Martinez said.

So began Rios versus Washington State Department of  Labor and Industries, a case that resulted in requirements for farms to provide better personal protective wear for their workers or to get rid of the chemical altogether, he said.

Farms also must require blood tests for their employees who are in close proximity to the chemicals, Martinez said.

The united farmworker movement spanned generations, Martinez said. The 1933 Battle at Congdon Orchards led largely by Filipino farmworkers, for example, paved the way for workers to protest peacefully without fear of jail time or brutality, he said.

“It showed us future farmworkers that, one, organizing and demanding something you deserve isn’t illegal by any means,” Martinez said, “and two, no one can detain you for that, no one can beat you up for that, that isn’t right.”