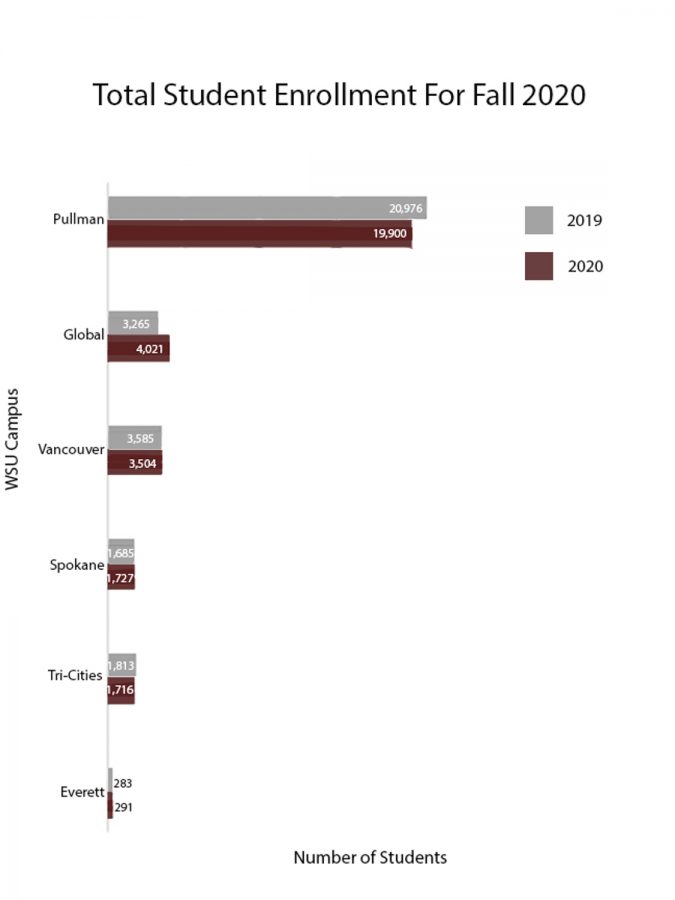 While WSU's enrollment decreased 1.4 percent, there were nationwide predictions that college enrollment might decrease by 20 percent.

As classrooms across the nation move to online learning, WSU — like other universities — saw a slight dip in fall 2020 enrollment.

“We really defied the predictions we were seeing over the summer,” said Phil Weiler, WSU vice president for marketing and communications. “There were lots of editorials being written that colleges and universities across the United States would see 20 percent reductions in enrollment.”

The Spokane campus had a 2.5 percent increase in enrollment while the Everett campus had a 2.8 increase, according to the website. Enrollment in both Tri-Cities and Vancouver campuses decreased by 5.4 and 2.3 percent, respectively.

The 1.4 percent dip is a “negligible amount,” Weiler said, considering the prediction was 20 percent. WSU has been seeing “record high” enrollments for the last couple of years, and the slight dip in enrollment this year meant that students wanted to come back to WSU.

“It was very much a hold your breath and see what students really chose to do,” he said. “I think they’re voting with their feet and decided to come back, which is great.”

If the 20 percent prediction occurred, Weiler said it would have caused financial difficulties. The university is primarily funded through contributions from the state and funds collected from students’ tuition.

Manuel Acevedo, director of mentoring programs and assessment for The Office of Multicultural Student Services, said he is pleasantly surprised that the decrease in enrollment is not higher than 1.4 percent, considering the circumstances.

“I know this is very difficult, difficult times,” Acevedo said.

Acevedo said MSS, like other organizations, had to make serious adjustments with the work it usually provides in person. MSS has been working with its student mentors to be creative with their virtual mentoring hours.

“It is challenging because … the core of mentoring is building the connection — the human connection,” he said. “I think it is more complicated to do that in a virtual environment than when we are face-to-face.”

Taking time out from school would extend the time to get one’s degree, Weiler said. Students may also find it difficult to get back to the mindset of being a student.

“I personally don’t think that would have been a smart choice,” he said.

Corissa Cruzen, WSU Panhellenic vice president of membership recruitment, said the Panhellenic executive council noticed a lot of students deferred their enrollment to spring and fall 2021. This — to the council — meant students would not be able to join the Panhellenic community until then.

“Overall, we had lower numbers of potential new members going through primary recruitment compared to years before,” she said.

However, Cruzen said she is sure more students will participate in spring. Panhellenic offers Continuous Open Bidding, which means students can still try to join in the spring if they do not get a chance in the fall.

“This is definitely the first dip that we’ve seen in quite a few years,” she said. “Our community has continually gone up in numbers just as enrollment has.”