Splitting water with electricity produces hydrogen and oxygen; drone has military, other applications 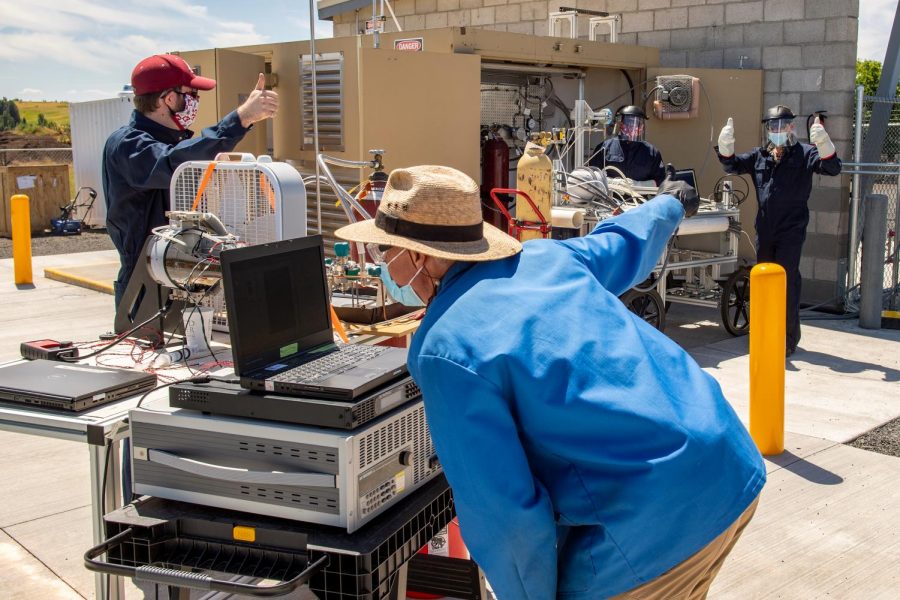 Researchers used liquid hydrogen as a green fuel source for drones. Fueling the drone only requires a few gallons.

A WSU lab is the first university lab in the country to successfully test liquid hydrogen as a green fuel source for unmanned aerial vehicles.

The drone primarily has military applications, Richardson said, but can also be used to assess the damage caused by wildfires and hurricanes, as well as inspect utility and rail lines.

Electric motors, such as ones running on liquid hydrogen, are more reliable and have a longer lifetime than traditional gasoline-powered engines, which require a lot of maintenance, said Patrick Adam, postdoctoral project researcher in the WSU School of Mechanical and Materials Engineering. Electric motors are also quieter, which is important for military missions.

Liquid hydrogen is sold in very large volumes, but fueling the drone only requires a few gallons, Richardson said. Because of this, the researchers had to make their own liquid hydrogen for the project.

“A fuel cell takes hydrogen gas and combines it with oxygen from the air, and produces water and electricity as part of that process,” Richardson said. “You’re either splitting water apart or putting water back together.”

The process for making liquid hydrogen can be completely green if the electricity comes from a renewable source, like wind, solar or tidal energy, he said.

“I think a lot of people are expecting to see a silver bullet … that may or may not exist,” Adam said. “But hydrogen is certainly going to become a part of the energy portfolio.”

Liquid hydrogen can fuel any vehicle that is continuously running, Adam said. It is not ideal for cars but can be used in trains, ships and aircrafts.

The research team designed and 3D printed a special storage tank to keep hydrogen at or below -423 degrees Fahrenheit, he said. Above that temperature, it would be in the gas state. They also created a refueling station to supply the drone with more liquid hydrogen after a flight.

Researchers hope to install the storage tank in the drone and complete a test flight later this fall, he said.

Richardson and Adam have been working with associate professor Jacob Leachman on this project since 2013, Adam said.