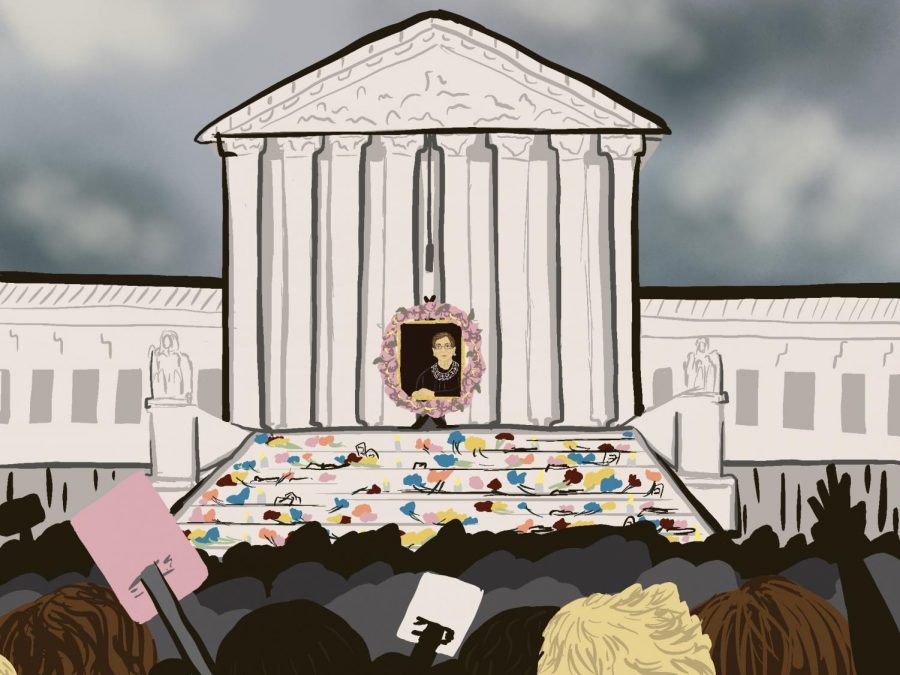 With RBG's death, the Supreme Court has been thrown into turmoil.

In the midst of the current political climate, no matter what party you stand for, it is undeniable just how much of an impact a historical figure like the late Justice Ruth Bader Ginsburg made. Her name will always be accredited to the advancement of several different progressive movements.

Aside from the power move of attending two major law schools during a time where it was perceived as “taking the place of a man,” she has several more accolades to add to her resume.

Ginsburg was known to push towards decisions that were meant to improve the quality of life of marginalized and underrepresented groups, even though she was nominated for her moderation and abilities as a “consensus builder.”

Michael Salamone, associate professor of political science, wrote in an email that a more prominent example of Ginsburg’s achievements was her work on achieving gender equality in the law by founding the American Civil Liberties Union’s (ACLU) Women’s Rights Project. Her effort and arguments persuaded the justices to strengthen the level of legal scrutiny in cases involving gender discrimination.

She was not planning on letting cancer put an end to her perception of justice. However, in addition to honoring her memory, there are numerous repercussions that follow her unfortunate death. Her haunting last wish, during one of the most globally eventful years in modern history, foreshadows just how much rides on the outcome of this year’s general election.

About 40 days before a long-awaited election for many citizens, the Supreme Court now has a seat to fill. Along with the duty of filling that seat comes many possible consequences that may follow after whoever is seated as the president picks the nominee. The United States will either continue towards a progressive path or toward a counter direction.

In accordance with the president’s second-term agenda, he includes several objectives revolving around the job market and the economy, foreign policy and the current pandemic. Along with this half of the agenda, President Trump also includes a half that illustrates what his presidential candidacy and general presidency has been like for many Americans for the past four years.

A few examples of this include teaching American Exceptionalism in schools, ending sanctuary cities in terms of immigration protections, and advocating the traditional anti-abortion rhetoric that the Republican Party is known for. Though there are several arguments to make all around the president’s goals if elected for a second term, a rather rational question arises during the prevalence of these events: if President Trump is allowed to nominate an individual to fill Ginsburg’s seat, what changes could this lead to whether or not the current president is re-elected?

In this theoretical situation, two political scientists analyze the possibilities a Trump-nominated justice could bring to the table.

Cornell Clayton, director of The Thomas S. Foley Institute for Public Policy and Public Service at WSU, said if President Trump is able to get another nominee on the court, that could shift the balance of power between liberals and conservatives. Clayton said the balance was 5-4 during Justice Ginsburg’s tenure — with the exception of Justice Roberts, who tends to side with the liberal wing in cases where there is precedent.

In terms of court decisions, Roe v. Wade is a perfect example of a case that conservatives disapprove of but have been unwilling to overturn completely because there is precedent.

“[Analysts] assume that one of the major factors President Trump is looking at when nominating an individual is whether they would be willing to overturn Roe v. Wade because it has been a central focus for electoral politics on the Republican side for at least forty years now,” Clayton said.

Clayton said replacing Ginsburg would allow for a new contact point for conservatives in the Supreme Court, which would theoretically shift the original numbers from 5-4 to 6-3, with an increased probability of overturning a major case such as Roe v. Wade. This connects with one of the president’s objectives while appealing to the Republican Party itself.

A much similar situation occurred three and a half years ago when Justice Scalia passed away in February 2016, during the last year of the Obama administration. This called for an evaluation, by the Senate, to justify the former president filling the seat or waiting until the elected president is sworn in to make the nomination.

The result of the dispute, as many can recollect, ended with the Obama Administration being barred from the confirmation process prior to the upcoming election by Senate Republican leader Mitch McConnell.

Now, the reason this raises concerns in present times is because there have not been many signs pointing towards a repetition of this action by McConnell. Now, they have a Republican in office who would most definitely nominate an individual with similar conservative values.

Clayton said this should be a concern because if Democrats were to win both the presidency and the Senate, and the Republicans managed to appoint a conservative justice prior to that succession, there would be tremendous amounts of pressure for the Democrats to change the size of the Supreme Court — thus jeopardizing our fundamental institutional structures and their independence.

Speaking on a more current note, the president has selected Amy Coney Barrett to fill Ginsburg’s seat in the Supreme Court as of Sept. 25.

Salamone wrote there could be different possible effects of an additional conservative justice. Amy Coney Barrett is a conservative in the style of the late Justice Scalia and Justice Thomas. She would indeed expand the conservative majority to 6-3 but would not greatly affect the results of divisive opinions that are usually decided upon partisan and ideological lines.

“There are several instances from the past several years where a single Chief Justice has gone against ideological expectations,” Salamone wrote.

Salamone referred to when Justice John Roberts sided with liberals in Department of Homeland Security v. Regents of the University of California to stop the president from immediately ending DACA.

Salamone wrote by replacing Ginsburg with Barrett, it would make it less likely for the Supreme Court to stray from a conservative position because justices continually see the world through the lenses of their ideological leanings, more so on these politically divisive issues.

Salamone wrote some political scientists might say the Supreme Court Justices make their decisions based on ideological attitudes, and their legal opinions are rationalizations and motivated reasoning. Others believe the justices do approach the law in a solemn manner, but their interpretation of the law is tangled with their political ideology.

Nevertheless, a concerning matter to some of the justices is the possibility that striking down a popular law may damage the Supreme Court’s legitimacy and feasibly lose the trust of the public.

It may be concluded that this tangle of events could lead to immense changes in the structure of the current judicial system or lead to stagnancy. Despite who is elected for president or Senate, this appointment to the Supreme Court could impact either side of the American political spectrum.