OPINION: Countdown to the 3rd: Grin and Barrett

Ginsburg's replacement is met with partisan conflict; the GOP gains the political advantage 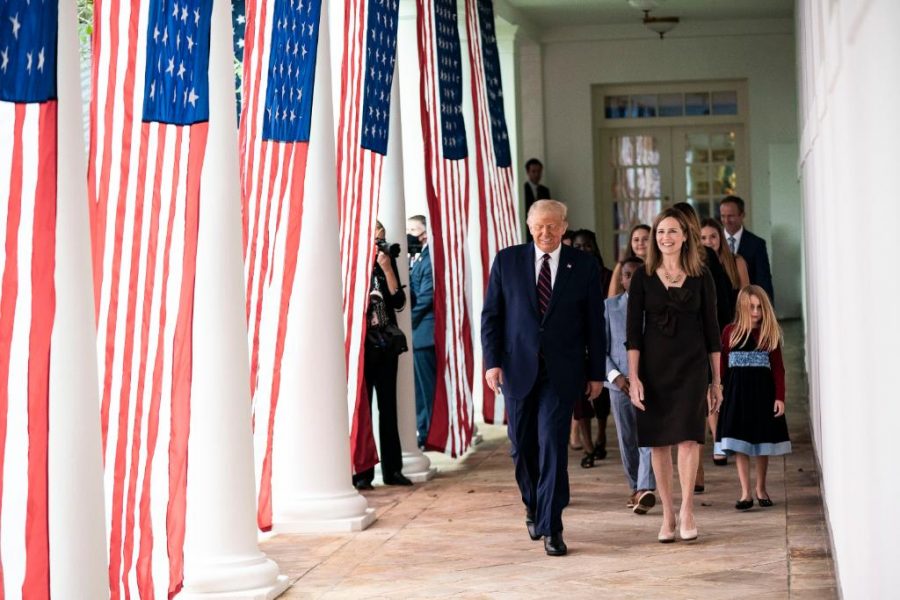 With Amy Coney Barrett’s nomination by President Donald Trump, the makeup of the Supreme Court is about to drastically change. In theory, the conservative 6-3 majority could last significantly beyond Trump’s presidency.

“All this for a family squabble.”

I recently watched “The Death of Stalin,” the Armando Iannucci film about the fight for power in the wake of the Russian dictator’s untimely demise. In the movie, Nikita Khrushchev jockeys for control of the Soviet Union by any means necessary — including murder.

It’s a given that, following the death of any political giant, there’s going to be a struggle for supremacy — we’ve seen it all around the world. It’s less prevalent in democratized countries because there tends to be some kind of protocol in place to maintain order – the vice president succeeds the president, for example.

In the Supreme Court, however, there’s a particularly partisan battle being waged for control of Ruth Bader Ginsburg’s recently vacated seat, and it looks as though the GOP, Khrushchev-like, may have gained the upper hand, pushing the court’s leaning from 5-4 to 6-3, in favor of more conservative rulings.

In a way, the political scheming is almost admirable. The GOP knows what it wants — control of the court — and it’s willing to abolish political precedent and go to any means necessary to achieve that goal.

Barrett, a Catholic conservative, has been favored by anti-abortion advocates, which is one of the Republican Party’s main topics for Supreme Court nominees. She also clerked for notorious Reagan nominee Antonin Scalia and follows his interpretation of Constitutional law known as originalism — the concept that justices should try to determine the traditional meaning of the U.S. Constitution when ruling on cases.

What does Barrett’s potential nomination mean for the judicial branch, and moreover, how is it going to affect American politics?

The easiest way to process this is by examining how long the conservative justices will be on the bench. Considering Ginsburg died at 87, it’s fair to assume a majority of justices will remain active for a good amount of time. John Roberts is 65, Clarence Thomas is 72, Samuel Alito is 70, Brett Kavanaugh is 55 and Neil Gorsuch is 53.

Assuming Barrett — who’s only 48 — is sworn in, we could see another 15 years (at least) of a Republican-controlled court, if you assume Thomas could match Ginsburg’s record. Furthermore, Steven Breyer, the oldest sitting justice, is both 82 years old and a Democratic nominee, meaning that if Trump is reelected and Breyer resigns, it’s within the realm of possibility that the court could swing to a 7-2 conservative standing.

Obviously, there’s a lot of assumptions that have to be made to bring the court to a 7-2 majority, but it speaks to the outsized effect the Supreme Court has on political discourse. The fundamental concept of a fair and unbiased court has essentially gone out the window, to an extent, as both sides realize that the courts are the last (and most important) political battleground.

If Barrett is sworn in, it would mean that the Supreme Court would be the most ideologically conservative it’s been since the ‘50s.

Again, this is all speculation, and given Roberts’ gradual slide towards the middle on abortion rights, combined with Gorsuch’s surprisingly liberal record on gay and lesbian issues, the court might not be as conservative in practice as it’s made out to be on paper.

However, considering the flagrantly obvious GOP goal to stack the courts in their favor, it’s also worth considering the principle that, to Trump, one hard-line, right-wing justice like Barrett is worth two John Roberts.

Additionally, if the Senate approves Barrett’s nomination and Biden takes office in November, there’ll be a conservative Supreme Court and a Democratic president, fracturing any hopes of party unity the Dems hoped to achieve.

It’ll also paint the court in a reactionary right-wing activist light, allowing disenfranchised Republicans to hold the majority of six up as folk heroes battling the liberal establishment.

All of this is to say — Ginsburg’s death has ushered in, Stalin-like, a brand new era of party infighting and ploys for power and control over one of the most important seats in the country.