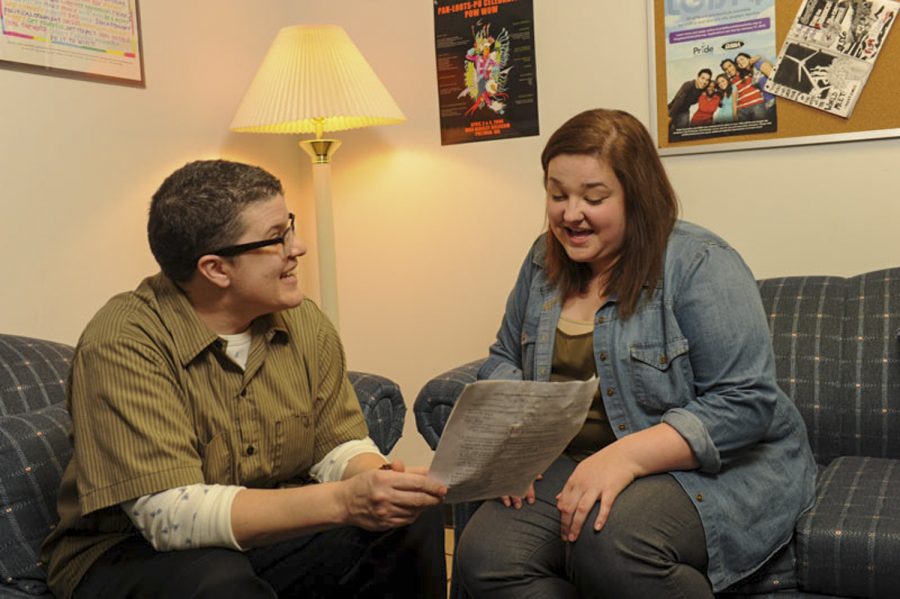 This week marks the publication of “Nepantla Squared: Transgender Mestiz@ Histories in Times of Global Shift” by Linda Heidenreich, an associate professor of history and affiliate faculty in the Women’s, Gender and Sexuality Studies Program.

A Euro-Latinx historian of queer Chicanx and borderlands histories, Heidenreich said “Nepantla Squared” has been in the making for four years. It started, they said, with an article about Gwen Amber Rose Araujo, a young transgender woman who was murdered in Newark, California in 2002.

Heidenreich said this started a journey of digging for more trans- and gender-related Mestiz@ histories and intersections with a shifting idea of capital.

“One thing we do as academics is look for answers,” they said.

Following the Araujo article, Heidenreich searched for more stories, focusing on the 19th and 20th centuries. They looked into the histories of Louis Sullivan, a gay transgender man born in the 1950s, and Jack Garland, a transgender man who lived in the late 1800s.

The comparison between two centuries, they said, helped them expand their work to look at how labor affects ideas around gender and immigration. As economic shifts create accelerated change, they said, race and gender lines experience similar reshaping.

“Transgender folks, especially those of color, are the most marginalized and in danger,” Heidenreich said. “[These studies are] a critical part of a larger weave of ethics.”

These shifting perspectives and ethics, they said, are what drive “Nepantla Squared” — the title itself refers to a Nahuatl word describing an in-between state.

Heidenreich’s desire to find these deeper, in-between histories started early on, they said. As a high school student, they began to notice the disparities between the stories they learned at home and the ones taught in the classroom.

Rather than being discouraged, Heidenreich said they wanted to keep studying history and the stories that had been excluded.

“It’s important to shift the narrative so that white, gender-normative history isn’t our only anchor to the past,” they said.

Veronica Sandoval, a doctoral candidate who helped Heidenreich compile the book’s bibliography, said Heidenreich’s work ties into studies done by queer Chicana scholar Gloria Anzaldua. Sandoval said Anzaldua was one of the first to expand the idea of Nepantla into queer, Chicanx and feminist theory.

A poet from the Texas borderlands, Sandoval said she’d never thought of Anzaldua in the way Heidenreich conceptualized, though she was already familiar with the scholar’s work.

“People who love Anzaldua will love [‘Nepantla Squared’],” she said. “Reading it was like, ‘Man, I didn’t know Anzaldua the way I thought I knew her.”

Sandoval said she’s worked with Heidenreich for a long time, taking more classes from them than any other professor. She said Heidenreich helped mitigate the culture shock of moving to Pullman, a predominantly white area.

“I knew that when I was in their office, they were going to make me feel that piece of home that was missing,” she said. “They were my anchor.”

She said they also guided her through the American studies doctorate while she worked for WSU as a staff administrator. As a non-traditional student, Sandoval said Heidenreich worked to remove the obstacles she faced, as she lacked the funding traditional students received.

Helping Heidenreich on the bibliography, Sandoval said, made her realize her own passion for archives and the editing process while strengthening her skills as a doctoral student.

“It’s a way [Heidenreich] helps students professionalize … they’ve really got your back,” she said. “They’re hardcore, and they’re down.”

Sandoval said she already has two copies of the book. Though she received the second by accident, she said she’s happy to have one copy for notes and the other to leave free of markings.

Heidenreich said the cover of “Nepantla Squared,” designed by queer Chicana artist Alma Lopez, made them all the more ecstatic about the book’s release. Called “Sacred Heart of Coyolxauhqui,” it depicts the ancient myth of the Aztec moon goddess who quested to kill her war godbrother before he was born.

The illustration ties into some of the book’s themes, they said, speaking to the struggles of women in a patriarchal society.

“When I found out [Lopez] was doing the cover, I was excited beyond words,” Heidenreich said.

They said they also have upcoming projects in the works, including another monograph and a co-authored handbook meant for intro classes on literature, history and Chicanx/Latinx studies.

“Nepantla Squared” is available through platforms like Amazon as well as the publisher, the University of Nebraska Press. Heidenreich said the Nepantla approach to the past is vital to understanding ongoing changes in history and philosophy.