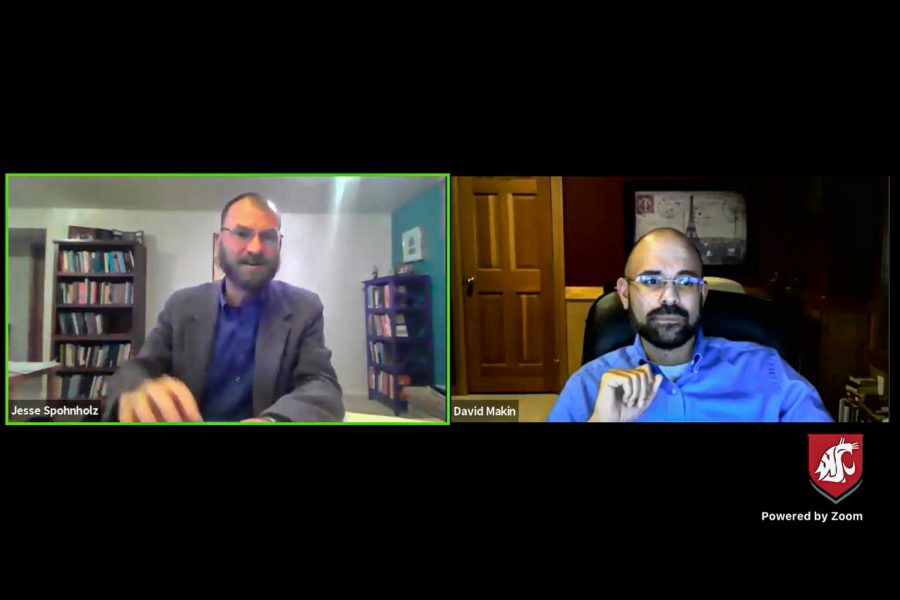 David Makin, WSU department of criminal justice and criminology professor, explored a brief timeline of policing in America and how reform should look during his Tuesday night lecture, “From Talk to Action: What Does it Mean to Reform the Police?"

The federal police budget has grown by nearly $193 billion since the 1970s, but the increase in funds resulted in an overworked police force and a lack of accountability, a WSU professor said.

“Looking across history, we’ve seen police scholars and reformers all indicating that law enforcement is a tactic. It’s not an outcome,” said David Makin, WSU Department of Criminal Justice and Criminology associate professor.

The Tuesday night lecture, “From Talk to Action: What Does it Mean to Reform the Police?” explored a brief timeline of policing in America and how reform should look.

Makin said the current tension between the public and law enforcement is echoing the early 1960s when citizens were beaten for advocating accountability and transparency. Except in place of canine units and nightsticks, there is now tear gas and tasers.

In 1967, the systemic problems of law enforcement were acknowledged, and a governmental commission crafted a list of recommendations to implement better policing, Makin said. This was a reaction to the unrest during the Civil Rights period, and the system is once again in need of an update.

“When we look through history, we see all these warning signs,” he said, “and we ignored them.”

Officers have become immediate responders for every crisis. Law enforcement is viewed as an outcome to solve all problems created by citizens, Makin said.

He said continuous cuts to mental health resources resulted in police officers becoming frontline responders to a variety of issues. Law enforcement has become the 24/7 resource for all issues related to mental health, housing security and food security.

“And we wonder why it is that the world’s largest provider of mental health is jails and prisons,” he said.

Makin said law enforcement should be small in numbers with limited power. They should narrow their purpose, only responding to victim crimes and designating victimless crimes to the proper department.

He said Eric Garner, a man who was killed by police during arrest in 2014, was initially approached by officers on suspicion of selling single cigarettes illegally. The incident should have been handled by an outside organization.

“Ever wonder why the police were tasked with handling what is a business regulation?” Makin said. “That’s what happens in overcriminalization — we give everything to the police to handle.”

Citizens must decide what law enforcement should be responsible for and change the laws that authorize police to intervene in situations where mental health, business or other social organizations could better serve them. Institutions that should be responding to these situations must be properly funded, he said.

Police agencies cannot be shut out of the process of reform. It must be a collaborative effort, Makin said.

“We cannot deny them of voice in this process because they have institutional knowledge that helps us work towards a better and more equitable system of justice,” he said.