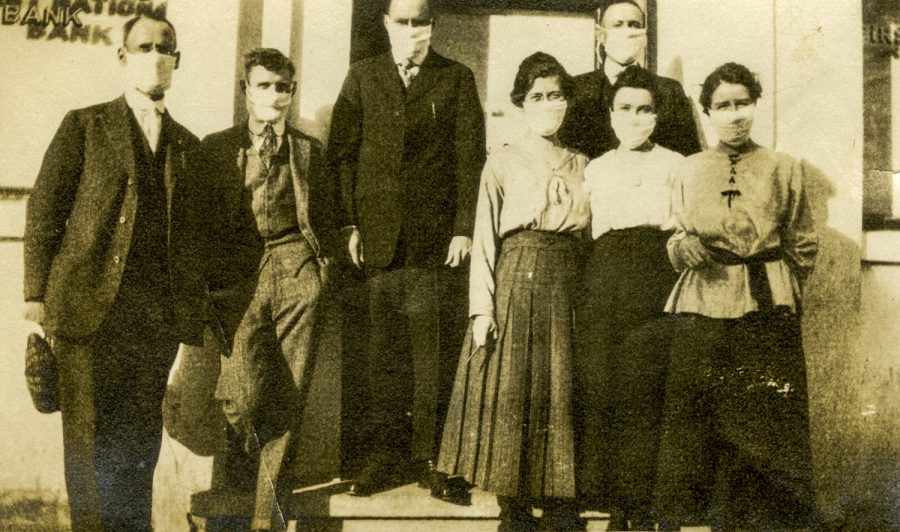 WSU, formerly known as Washington State College, did not allow townspeople to visit campus during the 1918 pandemic. Cases slowed in the winter but spiked in the fall.

People alive today have become familiar with widespread mask usage, self-quarantines and the politicization of a public health crisis.

Just over 100 years ago, conditions were eerily similar, said Melissa Nicolas, associate professor in the WSU Department of English.

Nicolas, who is researching the 1918 flu for her class on the rhetoric of epidemics, said people were upset about businesses closing and having to wear masks, the efficacy of which was unknown.

The lack of coordinated government response is the most striking similarity she noticed, Nicolas said. The Army handled most of the disease response at the time because the Centers for Disease Control and Prevention did not exist yet.

“The question I keep asking myself is, ‘Have we learned anything in 100 years?” she said, “and I think my answer is ‘No, not really.’”

People from marginalized communities, such as Black Americans and Italian immigrants, were hit harder by the flu virus than wealthier communities, she said. Similarly, COVID-19 has disproportionately affected communities of color.

WSU, which at the time was known as Washington State College, housed several hundred individuals from the Student Army Training Corps, said University Archivist Mark O’English. One of the student soldiers likely introduced the flu to the campus population.

Unlike COVID-19, there are very few records of the 1918 pandemic around the Palouse, O’English said. This was due in part to World War I, which was the focus of the country’s attention at the time.

Campus was less spread out and had fewer buildings, O’English said. Most students lived on campus or in Greek housing, and therefore would have been in close contact with other students during the shutdown.

Because transportation was mainly by horse and cart, with very few automobiles, most students would have had to stay on campus throughout the pandemic, he said.

“I don’t know if they knew when they’d be allowed to be doing things again,” O’English said. “If it’s a big struggle to get home, will you be back on time when they start?”

Campus closures were communicated by a newspaper, so it took much longer to notify students in 1918 than it would today, he said.

Students from the SATC stood guard at the edge of campus to prevent students from entering Pullman, O’English said. Likewise, townspeople were not allowed to come onto campus.

Nicolas said the timeline of the two pandemics is similar. In 1918, a first wave began in late winter or early spring, seemed to die down for a few months, then resurged in the fall. The second wave was much deadlier.