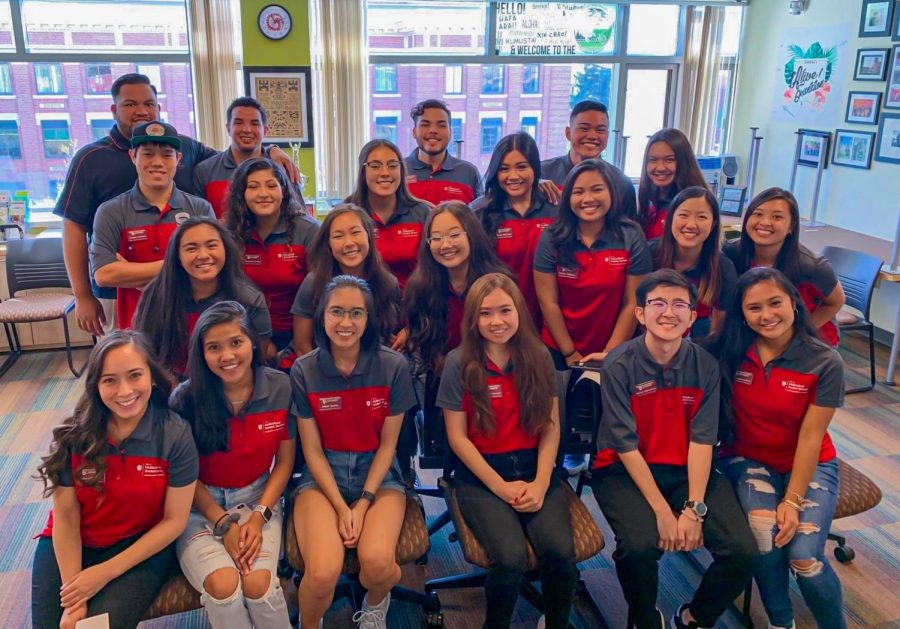 Kim Padilla, from left to right; third person in the third row, became a mentor for the Asian American and Pacific Islander Student Center after her freshman mentor provided resources for her to get connected with the WSU community.

When Kimberly Padilla first arrived at the WSU Pullman campus, she was struck with an overwhelming amount of homesickness. Now as a student mentor, she hopes to ease the transition for other students.

Padilla, WSU junior human development and Spanish double major, came to WSU from Southern California. She lived there her entire life, only moving once just down the block from her old home.

“I always knew I wanted to go to school out of state, and when I came to tour WSU, I immediately knew this was the place for me,” Padilla said.

Padilla had a student mentor during her freshman year. She said her mentor would send her reminders of important dates and events around campus, which proved to be helpful in connecting to other students on campus.

“Because of my mentor, I wanted to be able to do the same for other students during their first year at WSU,” Padilla said. “I had someone I could go to with any problems, and I want to be that someone for students.”

Padilla, student mentor for the Asian American and Pacific Islander Student Center (AAPISC), has gotten close with the incoming freshmen she mentors. The students would go to her to vent during rough times or they would grab coffee together, she said.

“I was extremely homesick when I first came to WSU. Within the first week here I started looking into transferring to a school closer to home,” Padilla said. “However, I started to get more involved with the school, which led me to stay. I don’t want my mentees to feel the way I did, so I’m always there to reassure them.”

With WSU being online because of COVID-19, Padilla has to do her mentorship virtually. The mentors face many challenges, but the AAPISC now hosts virtual study tables and office hours. Students can hop onto a Zoom meeting and talk with mentors, other students or retention counselors, Padilla said.

“Kim is an amazing leader,” Gema Garcia-Ochoa, another student mentor, said. “She comes up with ideas outside the box and always shows initiative, which is inspiring to see.”

Garcia-Ochoa has been working in the mentorship program for almost two years. She said the best part is helping the mentees because she knows the information and the help she gives them supports their college career.

Padilla was an involved student during high school. She played soccer, volunteered at a children’s hospital and was president of the Unity Club, she said.

“The Unity Club really focused on promoting acceptance and understanding on our campus,” Padilla said.

Outside of mentoring, Padilla is the diversity and inclusion chair for the Alpha Gamma chapter of Sigma Kappa. She serves on the Sigma Kappa Foundation Diversity, Equality, Inclusion and Accessibility Workgroup. Her goal as chair is to make sure all the women in her chapter feel welcomed and safe in whatever they are doing.

“We have created a grant that allows for any chapter of Sigma Kappa to bring in a DEIA related speaker,” Padilla said. “The workgroup is also currently working on making another scholarship, which caters to a more diverse group of women.”