Some schools are favorites to win their division, some may shock the entire conference 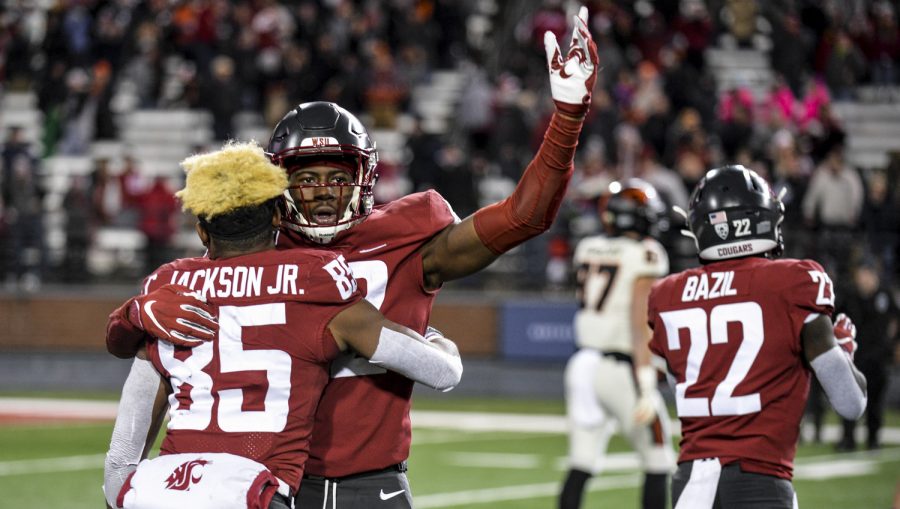 WSU will face all five remaining schools in the Pac-12 North division in 2020, a road trip to USC is the Cougars’ only outer-division matchup for the season.

The Pac-12 released the 2020 football season on Saturday, with notable matchups throughout the seven-game regular season.

The regular season starts the weekend of Nov. 6-7, ending with the Pac-12 championship game on Dec. 18. The conference championship will happen two days before the College Football Playoff Selection Committee makes its choices for the national championship.

Even though the Pac-12 has six scheduled games this season, every team except for those in the conference championship will participate in a ‘to be announced’ seventh game.

The University of Oregon Ducks start off as the favorites to win the Pac-12, followed by the University of Southern California Trojans, the Washington Huskies, Utah Utes and Arizona State Sun Devils in the top five.

Without each team’s seventh game being formally announced, here is a prediction of every Pac-12 team’s record after the first six regular-season games.

The Wildcats are projected to either finish second-to-last or last in the Pac-12 this year, and their schedule doesn’t help their case for more than two wins. Arizona faces Utah, USC, Washington, UCLA, Colorado and ASU. Four of the five teams Arizona faces are favorites to win the Pac-12, and they start off with their three away games in the first four weeks. The Wildcats’ schedule early on will put them in a hole they won’t be able to dig themselves out of.

The Sun Devils are projected to finish in the top five this year in the Pac-12, and they definitely should finish there. ASU plays USC, California, Colorado, Utah, UCLA and Arizona. If ASU can beat Utah in a deciding game, then they will be the top spot in the South. The Sun Devils will be a contender but will fall just short at the end to Oregon in the conference championship.

If I had to pick a sleeper team in the Pac-12, it would definitely be the Golden Bears out of California. They face Washington, ASU, Oregon State, Stanford, Oregon and WSU. Cal has their veteran quarterback Chase Garbers returning and look to be a contender in the North with Oregon and Washington. If Cal can run the table and potentially beat top-ranked Oregon at home, don’t be surprised if they make it to the Pac-12 championship.

The Buffaloes lost a lot of key members of their offense from last season, including former quarterback Steven Montez and wide receiver Laviska Shenault Jr. This year will start their rebuild to the top of the Pac-12. Colorado opens up the season against UCLA, then Stanford, ASU, USC, Arizona and Utah. Colorado finishing off against the Sun Devils, Trojans and Utes will not be an easy stretch to end their season, resulting in getting one or two wins this season.

The Ducks are the big favorites to win the Pac-12, and their easier schedule compliments towards another Pac-12 championship appearance. Oregon faces Stanford, WSU, UCLA, Oregon State, Cal and Washington. Oregon will most likely be the North division representative in the Pac-12 championship game this season. If I had to circle two games to watch out for, they would be the WSU game and the Washington game. WSU has had the Ducks’ number four out of the last five years, and the last time Washington played in Eugene, Oregon, it went to overtime. But, with all that, Oregon should go undefeated, win the conference and have the best chance out of the entire Pac-12 to appear in the CFP.

The Beavers have been a team that finishes around .500 for the past few years, and have always come up with a game or two short. The Beavers easily have the hardest schedule in the Pac-12, with their middle stretch being very difficult. OSU plays WSU, Washington, Cal, Oregon, Utah and Stanford. The stretch from Washington to Utah will not fall in the Beavers’ favor, leading to another season under .500.

The Cardinal are still in their rebuild process after Andrew Luck and Christian McCaffrey left for the NFL. This season, much like Colorado, will be the year where they need to find out what leads to success. Stanford plays Oregon, Colorado, WSU, Cal, Washington and Oregon State. Unlike Oregon State, the Cardinal have an easier schedule, but the success definitely will have to wait, especially since they open up against the favorite.

The Bruins are in a tough spot, after running back Joshua Kelley left for the draft last offseason. They will have some stiff competition this season, but I definitely see them finishing at least at .500. UCLA plays Colorado, Utah, Oregon, Arizona, ASU and USC. The Bruins have a tough schedule at hands, but with the luck they had last season carrying into this season, having them finish 3-3 is great for them.

The Trojans are a top contender in a crowded South division with Utah, ASU and more, but, with quarterback Kedon Slovis at the helm, they will finish in the top-three in the South. USC faces ASU, Arizona, Utah, Colorado, WSU and UCLA. USC has a good chance to make a Pac-12 championship appearance this season. The deciding game on whether or not the Trojans make it back to the Pac-12 championship game will be the away game at Utah — if they win, they’re in, if they lose, they’re out. USC will still have a great season nonetheless.

The Utes are a favorite to win the South again and play in the Pac-12 championship for their third straight season. Utah plays Arizona, UCLA, USC, ASU, Oregon State and Colorado. The deciding game for the Utes will be their week four matchup against USC, for the South division. Utah will have success for the third season in a row, even without key members from the Utes’ star-studded defense last year, running back Zack Moss, and quarterback Tyler Huntley.

The Huskies are coming off a disappointing season, finishing 8-5 with former head coach Chris Petersen stepping down last year. But with all that, the Huskies are still a top-recruiting team in the Pac-12 and should have some success. Washington faces Cal, Oregon State, Arizona, WSU, Stanford and Oregon. The Huskies, under new head coach and former defensive coordinator Jimmy Lake, have to start and finish with hard matchups on the road, but they’ll finish in the top-three of the North division.

The Cougars are also coming off a disappointing season, finishing 6-7 with former head coach Mike Leach moving on to coach for the Mississippi State Bulldogs. The Cougs are starting their rebuild process with new head coach Nick Rolovich from the University of Hawaii, and a new offensive system WSU has not seen in years. WSU faces Oregon State, Oregon, Stanford, Washington, USC and Cal. The Cougars are a wild card this season, but with their unpredictability, a .500 record is a good prediction for them heading into an equally unpredictable season.