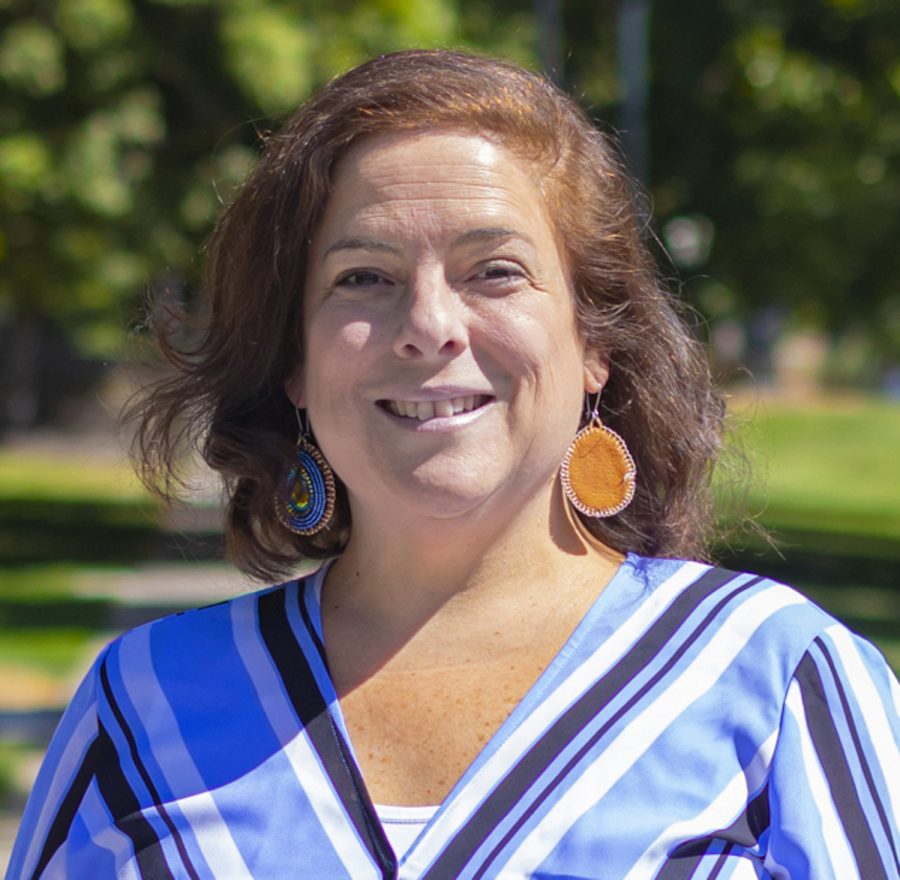 Samantha Edgerton helped with the WSU Fallen Cougars project in 2018 to create 17 biographies. She also gave a presentation about it.

This year’s GPSA Vice President pursued a career and a family before coming back to graduate school, which gives her a unique background that allows her to prosper in her position.

Samantha Edgerton is a second-year doctoral student in history at WSU, but before she decided to pursue a graduate degree in history, she worked in the disability and insurance industry for 18 years.

After the birth of her youngest child, she decided to go back to school at WSU Vancouver, she said, and met a professor there who is now her adviser, Laurie Mercier.

“I was hesitant to start a master’s program because of my age,” Edgerton said, “but my adviser encouraged me to not let that prevent me.”

A master’s program was a huge commitment, and she chose WSU because it was still close to her family, she said.

She enjoys taking on leadership roles, and when the opportunity presented itself to run for GPSA with Jenn Johnson, doctoral candidate in WSU’s School of the Environment, she thought this would be a good time to pursue this position, Edgerton said.

Her educational journey has gone in phases and has been one of the most rewarding things in her life, she said.

“This has been a dream of mine to finish my degree and to actually be able to call myself a historian,” Edgerton said. “While it has been incredibly difficult, so many people encouraged me not to quit.”

She is a nontraditional student who has the responsibility of completing a degree while taking care of her family. Fortunately, her husband was able to get a job and provide for their family, she said.

“This entire process has been very rewarding, exceedingly difficult, lucky and the intellectual community has helped me grow as a scholar and person,” Edgerton said.

The first year of graduate school was the most difficult for her due to personal and financial reasons, she said.

“There were no daycare spots available anywhere and the Pullman Montessori was very expensive,” she said. “It depleted the majority of our savings within the first year.”

Financially, there were times where she thought she would have to quit and psychologically where she felt incredibly selfish, Edgerton said. After the first year, the situation began to improve for Edgerton and her family.

“My husband was able to find [a job] at [Schweitzer Engineering Laboratories] and has been involved in the Pullman community,” she said. “My son has also found a great community at the elementary school.”

She has made a few lifelong friendships that keep her going in academics, she said.

“Samantha is going to be a great historian and she is much more talented and insightful than she will ever admit to herself,” Fleischer said.

On top of being a graduate student, she said she is also a teaching assistant.

“The most important thing about being a teaching assistant to me is offering students advice and mentorship,” Edgerton said.

Her dream goal is to be a professor at a community college because that is where her journey started with a women’s studies professor, she said. Her family members are also avid students of history.

“Everyone has their specialty,” she said. “My brother loves the Civil War era, and I love early modern England, specifically the Tudor era.”

Her academic focus is now on violence against women and gender, race, ethnicity, social movements and popular culture, she said. In summer 2019, she began working on the WSU Fallen Cougars project with Ray Sun, WSU associate professor of history.

“The purpose of the project is to create biographies of all former WSU Cougars who died in World War II,” Edgerton said.

She created 17 biographies and gave a public presentation last Veteran’s Day at the Pullman Depot Heritage Center, she said.

“This was such an amazing experience and there were times where I’d be sitting there reading a letter from a mother and was so overcome with emotion,” she said.

These events are important because people can still relate to them today, she said.

“These young men had their entire lives ahead of them,” she said. “Some couldn’t stay because of financial reasons and some played sports.”

“She is one of the hidden gems of the graduate student programs,” Booth said. “I keep secretly hoping that Samantha will come to our side and join military history. She really brings a different perspective to it.”

During Edgerton’s free time, she loves spending time in the outdoors and traveling.

“History is so important because it can be connected to contemporary issues and lives in the ongoing events of today,” Edgerton said.