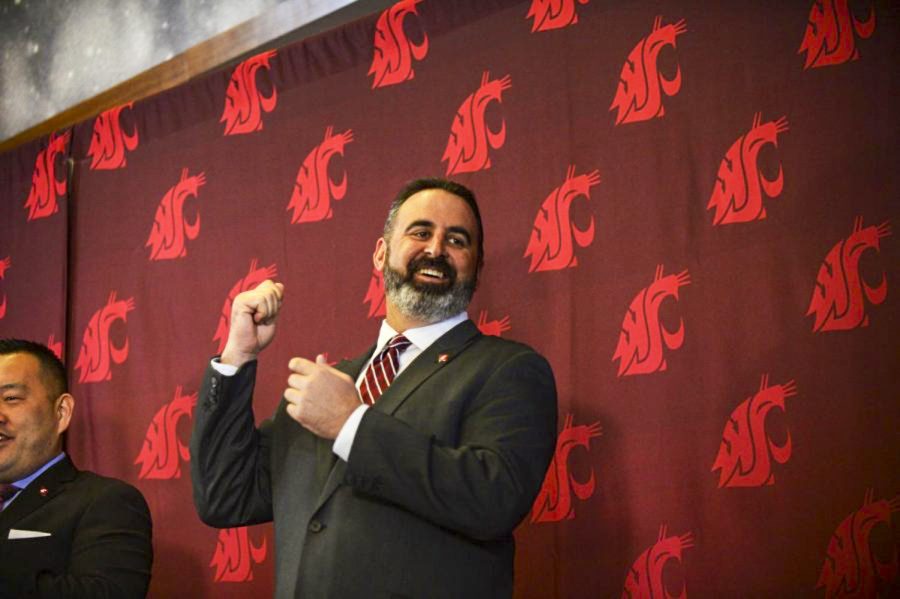 WSU football head coach Nick Rolovich spoke about the opportunities the 2020 season presents for the university during a press conference Wednesday.

He said he views this season as a great opportunity to make some noise in the conference and defy people’s expectations.

“I see this as good of a chance as anything, especially if you’re picked last, to jump on people. Pounce on people,” Rolovich said.

With the season only being seven games this year, he said it is going to be about what team gets hot and sticks together.

The Cougars’ chances of getting hot are going to depend on the quarterback play; a storyline that has dominated much of the offseason conversation. Redshirt sophomore Cammon Cooper, redshirt freshman Gunner Cruz, and true freshmen Jayden de Laura and Victor Gabalis are all competing for the job.

Rolovich said he loved how each of the quarterbacks has been working. He said quarterbacks’ coach and co-offensive coordinator Craig Stutzmann has done a good job of mentoring and bringing the guys along.

“They all got different things they need to work on and get better as a group but even some of the stuff we’re doing now, I see a lot of improvement,” he said.

A starting quarterback has not been named yet, and Rolovich said the end deadline to do so is Nov. 6, which is the day before the first game. He said in a perfect world, the starter would be named about two weeks before the first game, but this season is nowhere near normal.

He said the three quarterbacks getting the majority of reps in practice are Cooper, Cruz and De Laura. When one of the three separate from the pack, there should be enough evidence to name a starter.

“When it’s time to announce a starter, I think we should feel comfortable to do that,” he said.

Rolovich also said that the quarterback competition could be a game-by-game situation. He has proven in the past that he will play whoever gives the team the best chance to win and is not afraid to do that going forward, he said.

He said he has been impressed by the entire team overall, as well.

“This team knew how to work when I got here, that was evident in the weight room,” he said. “They weren’t afraid of hard work. They probably had more quote-unquote ‘blue-collar style,’ which I enjoy coaching.”

He said there has been a high level of buy-in on the offensive side of the ball. The transition to a new system has been smooth but did not come without challenges.

Rolovich said the shortened offseason and reduced amount of practice time has changed the team philosophy more than anything else.

“The hard part for me is not being able to be around them as much in person,” Rolovich said. “You can do so much through text or electronic communication or ‘Zooms’ or all that stuff but the real connection is done in person.”

He said the defense has also adapted well to the new system and new coaching staff. He said he likes the structure new defensive coordinator Jake Dickert brings to training defense.

“He does a nice job running that side of the ball and the guys know they’re going to get coached every snap,” Rolovich said. “Every chance [Dickert] and the guys on the defensive staff get they are coaching and they are talking to [the players].”

The Cougs are scheduled to start the season on the road against the Oregon State University Beavers on Nov. 7